> A Day in the Life: A SeaBus Attendant in Vancouver Skip to content 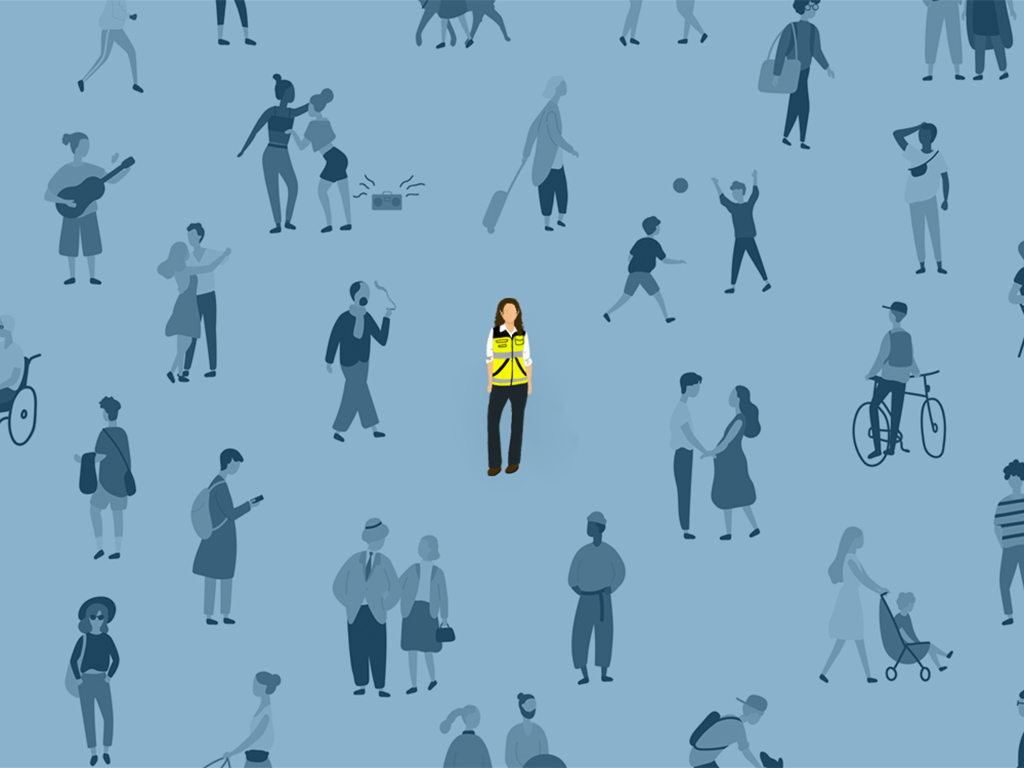 The first time my brother came to visit me in Vancouver, I took him on the SeaBus. We boarded downtown and puttered across the Burrard Inlet to Lonsdale Quay, in North Vancouver, where we ate lunch as we watched a sea gull painstakingly eat a purple sea star as it in turn slowly and unsuccessfully attempted to escape the clutches of the gull’s beak.

As an established fan of public transit, my feeling about the SeaBus is that it might just be the best form of public transit — it’s a short and reasonably priced mini cruise, traffic consists of other cool boats (or, less often, wildlife), and it offers some really great views of the city that are otherwise only available if you own a boat.

So I was very excited to speak with Erin Young, who has been a SeaBus attendant for 12 years — she was hired on ahead of anticipated transit demand growth during the Olympics.

The following interview has been edited for length and clarity.

What does a SeaBus attendant do?

Mainly, I’m there in case of emergencies. If anything were to happen on the boat, we’re there to handle that. From an evacuation, a man overboard situation or fire in the engine room, but mainly there to move the passengers safely. We do drills every weekend. It could be a bomb threats, possible fire, unruly passengers — all sorts of stuff. I sometimes describe it that I’m a tour guide, a social worker, a cop without authority. I can wear all the hats. But yeah, mainly we’re there for operations, and making sure we’re moving people smoothly back and forth.

Have you ever had to deal with an emergency while you’ve been on board?

There have been a few over the years. It all kind of blends into one. But most of the time, it’s people with mental health issues.

The most sobering incident I’ve had was a man having a heart attack on my boat. We called the paramedics, and they came pretty quick to take over. As for boat emergencies, one time three out of the four engines cut out, which made it difficult for the captain to dock the boat, and the passengers got a bit frustrated. But I haven’t had to put any real fires out yet.

Have you had anyone go overboard?

Actually, a couple of weeks ago, we had somebody fall into the water between the ramps and the boat. I wasn’t actually working. But yeah, we’ve had a few “man overboards.” Especially around the Quay — people have jumped into the water, in the winter, when they shouldn’t have been there. We have a work boat that can go help with a rescue, and the fire department comes down and they meet us.

On the tour guide side of things, what kinds of information do you share with folks? What are people interested in learning about about Vancouver?

I’m born and raised in Vancouver, and after the Olympics, I really saw the crowds grow and so many people come over to see Grouse Mountain. That’s number one. Everybody goes to Grouse Mountain. So when people are coming from downtown going north, and they’re like, “How do I get there?” I say, “236, Grouse Mountain Bus, right out front!” I think that’s the most common phrase I say, or “Washrooms to the left.” The North Shore hikes are amazing and I love sending people to the art galleries or for bike rides around Stanley Park — you know, all the beautiful places we have to share with people.

What shape does an average day take for you? When does it start and end?

The SeaBus runs 20 hours a day Monday to Saturday, and 15 hours on Sundays. It’s shift work so we end up working 10 hours a day for seven days, followed by seven days off, Monday to Sunday. Which is perfect for me and my hobbies and others and their side businesses. We rotate through eight different shifts, from boat shifts to terminals, day or night. I either start at 5:45 in the morning and work till 4 in the afternoon, or I start at 3:45 in the afternoon and work until 1:45 in the morning on the night shifts. The passengers during the day can be quite different from the nights. Day people, we have the nine-to-fivers and tourists, and night people are the dinner out, drinking, partiers and your riffraff — a totally different cast.

I think most people have taken public transit. But not everyone has taken a boat as part of their public transit experience. What makes it different?

Well, we’re still just moving people, just like the buses, or the SkyTrain. I used to be the violence in the workplace rep., and so one really great thing, working-wise, is we’re in partners, we’re always together. There are a lot of people around. There’s a captain and a mate. So we work as a team more often. Bus drivers are usually alone, and they’re sitting in traffic. And, you know, especially over the last couple of years with COVID, everything, including dealing with mental health crises, has been quite challenging. On the SeaBus, you always have somebody there to help out.

And you’re on the water, which everybody likes. I think that also brings more tourists, just to ride the boat to see the city from the water. All the kids love to sit at the front of the boat and watch for wildlife.

Do you often get to see wildlife from the SeaBus?

Obviously a lot of seagulls and birds and seals. But in the last four or five years, we’ve had whales come in a lot, including a few killer whale pods. So that’s magical. I get so excited to see them, it’s pretty great. There have also been dolphins — I think it was a few years back? — but they were behind our wake for a few weeks, just farting around and hanging out.

What drew you to working on the SeaBus?

I grew up in Indian Arm, and it was boat access only, so I grew up on the water. My dad worked on the SeaBus for 30 years. So I followed in his footsteps and we got to work together for about two years together before he retired 10 years ago. Because of the shift work, when I was growing up, my dad was able to help build our home and have a lot of hobbies on the side. I just really liked that it gave you time for yourself. I love the schedule. That’s pretty much what brought me here. And then of course, I get to be on the water, which I also love. It’s nice. In the winter months, I get to watch the sun rise and set the same day.

Does the weather ever get so rough that the boat can’t pass?

No, we’re a catamaran so we take waves pretty well. Especially in the inlet, we’re a lot more protected than we would be out in the Georgia Strait, or anything like that. Some people do get a little seasick in the winter months, especially if they’ve been drinking.

What are the most challenging aspects of your job?

A Week in the Life: An OB/GYN Who Provides Abortions

I would say dealing with mental health crises. Sometimes you’re just sitting on the boat watching the sunrise and sunset and other times it feels like everything happens at once. Some weeks go by and nothing happens. Other weeks, it feels like everybody’s in a mood, and everybody’s upset with you. It’s our job to be cool, calm and collected, and sometimes that’s a big challenge. Especially during the pandemic. The last two years have been really challenging and caused a little bit of burnout for everybody I know, across all jobs. We’ve all had a pretty hard time dealing with things.

How did your job change under COVID? And what was it like to do an essential job, at the beginning of the pandemic, when a lot of other folks like had been sent home?

A Week in the Life: A Faith Leader Navigating the Pandemic

I think this goes for everybody, in all jobs, but in those first few weeks there when you thought it was on every surface, there was a lot of uncertainty and fear. And right away, the people just disappeared, and it was just the staff. So our schedule changed from twenty hours a day, to 7 a.m. to 7 p.m. Our passengers were grocery store clerks and nurses, people like that. We weren’t sure if our jobs were going to be there.

And then some people believed in COVID, and some people didn’t believe in it, and it was a challenge to deal with people’s anxieties and moods.

A Day in the Life of a Big-Tree Hunter

When we had the mask mandate come out, I think transit was actually one of the first areas to kind of put it out there. Which was really great. I was really proud of us for doing that. But dealing with the people that didn’t want to wear a mask — that was hard. Passengers would physically fight each other or come yelling at staff while filming your reaction. Very challenging to navigate it all.

What are the most joyous and meaningful parts of your job?

It’s very social. And I do love working for the community. I like being a part of it. And yeah, you know, sitting on the boat — when I have the boat shifts, I’m just smitten. I get to go back and forth and look at the view and feel so grateful for it all. And then on the terminals, it’s being around people and answering their questions. Everybody from around the world comes to Vancouver. So I get to meet people and chat it up, and I think that’s really great. I think one of the most important parts of working with the public like we do, is having kindness, patience and empathy for everyone who rides, cause honestly, everyone takes transit and helping them is the main part.

During the Olympics I gave out so many high fives I thought my hand was going to fall off. Being in the community like that, and seeing everybody being so happy and cheerful and so spirited was one of the greatest times. Everybody was just in such a great mood, and that energy was contagious. More of that, please.