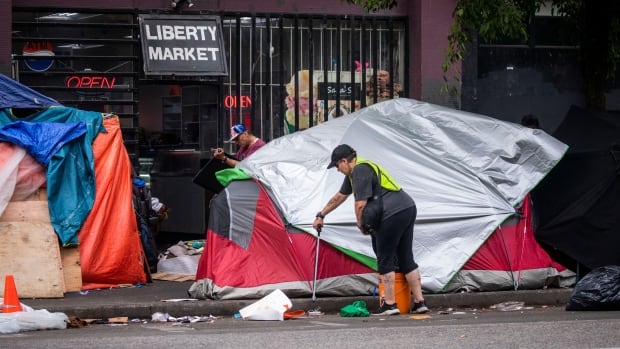 A week before the City of Vancouver decided to serve eviction notices on the occupants of makeshift shelters on Hastings Street in the Downtown Eastside, they awarded a number of community organizations combined contracts worth $50,000 to make the area safe for residents.

The organizations say they entered into the arrangement to help remove garbage and flammable materials on the assumption that the city was committed to helping them support the unhoused residents that were living there.

But after the city issued eviction orders, they say they feel like they were “set up to fail,” and they don’t know what the city expects of them if the residents are to be forcibly moved.

On July 25, four days before community workers say they were issued contracts to keep the area safe, Vancouver Fire and Rescue Services ordered the removal of the structures, citing safety concerns over blocked fire escapes and flammable materials in tents.

However, the deadline to remove the tents and their occupants has passed, and no firm solutions have been announced yet for alternative living arrangements for the unhoused people there.

Vancouver Mayor Kennedy Stewart and Fire Chief Karen Fry both said eviction plans had been in the works for a week before the order came down on July 25. But for the residents and the community workers who had been issued contracts to maintain the living spaces, it came as a total surprise.

“We were blindsided by the announcement,” said Brittany Graham, executive director of the Vancouver Area Network of Drug Users (VANDU).

“We were under the impression there was going to be time to work on some of the concerns around fire safety that the fire department and the city had noted.”

VANDU is among a number of community organizations that are part of “Our Streets,” a block stewardship program contracted by the city to work with tent city residents starting July 11.

Graham said the organization has been providing the residents with essential supplies since then and has also removed garbage and propane tanks from tents.

They haven’t yet been told what would happen to their contract if the structures disappear. Graham said it would be very difficult to continue the block stewardship program in the same way with the looming threat of eviction hanging over residents’ heads.

On The Coast12:17Vancouver Mayor Kennedy Stewart on DTES tent clearing

Vancouver Mayor Kennedy Stewart responds to questions and criticisms about Vancouver Fire’s order to clear tents and structures from Hastings Street in the Downtown Eastside, and why the City isn’t doing more to help those affected by this.

The temporary contract signed with the city after council passed a motion that asked it to envision an alternative way to keep Hastings Street clean was to last until September.

Graham said the residents in their makeshift dwellings had expected to stay where they were while the workers helped keep the block clean. But now, they were unsure of what the city expected from them — and they felt a lack of trust given the sudden nature of the order.

Graham said they would be meeting with residents to figure out how the block stewardship program could continue.

Workers told CBC News the organizations were in multiple meetings on the Monday the eviction order was announced, including two with fire officials on safety concerns.

But at their regular 3:30 p.m. meeting that day, a city official told the support workers they had been emailed the eviction order.

“Our coalition was very shocked because we had been coming to the table in good faith, working with them and hoping that they were doing the same,” said BeeLee Lee, the vice president of the Coalition of Peers Dismantling the Drug War.

“In a matter of seconds, all of the advocacy work that we have been doing with the community … was taken away from us,” she said. “It’s just a bunch of bullshit … It was almost like they set us up to fail.”

In a statement, the city said the funding for VANDU’s contracts would continue through September.  A spokesperson did not specify how the work would continue if the tents and residents are to be removed or when that is supposed to happen.

“City staff have been in ongoing communication with VANDU and the Overdose Prevention Society, and the working group is continuing to meet,” the spokesperson said.

“However, it is important to note that the City has been clear that structures would need to be removed from the sidewalks. The fire safety work was just to mitigate risk as much as possible until a process to remove structures could be determined.”

In a statement Friday, Vancouver Mayor Kennedy Stewart said he “was working with non-profit housing and social service providers” on the eviction order and called on higher levels of government to assist with more funding.