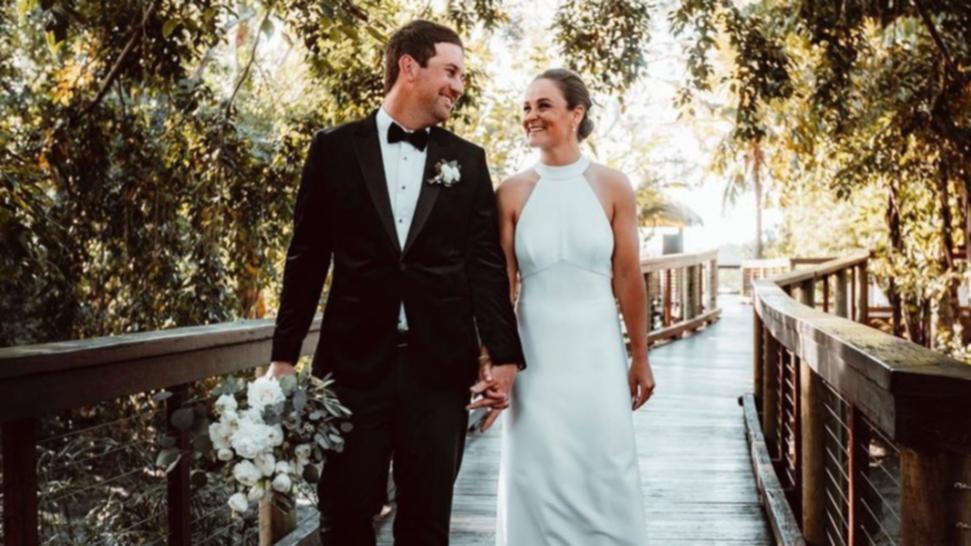 The Queensland couple announced their marriage on Saturday night after they wed in secret.

“Husband & Wife,” former world No.1 tennis player Barty wrote on Instagram with a picture of her and Kissick after the ceremony.

She wore a long white gown while Kissick donned a black tuxedo.

Details of the wedding had not been made public and it’s unknown where and when it was held.

The 26-year-old Barty and Kissick had been dating since meeting at Brookwater Golf Club in Queensland in 2016.

In November last year, the couple announced they were engaged.

They both share a passion for golf, with Kissick an aspiring professional and Barty having played in celebrity tournaments since her retirement from tennis in March.

She has kept incredibly busy since her retirement.

The three-time tennis major winner was at golf’s British Open in Scotland earlier in the month and expressed her support for fellow Queenslander Cameron Smith, who went on to win the tournament.

She has been working on a memoir and is preparing to release her own line of children’s books.

“She’s six years old, a book worm, absolutely loves it and she’s just going through that age where she’s growing and learning so much and it reminded me of what I was like as a kid,” Barty told Sunrise in June.

“So this is always something I wanted to do, and not just (to) encourage kids to try different sports through my stories and through my experiences as a kid, but to continue their education through reading.”