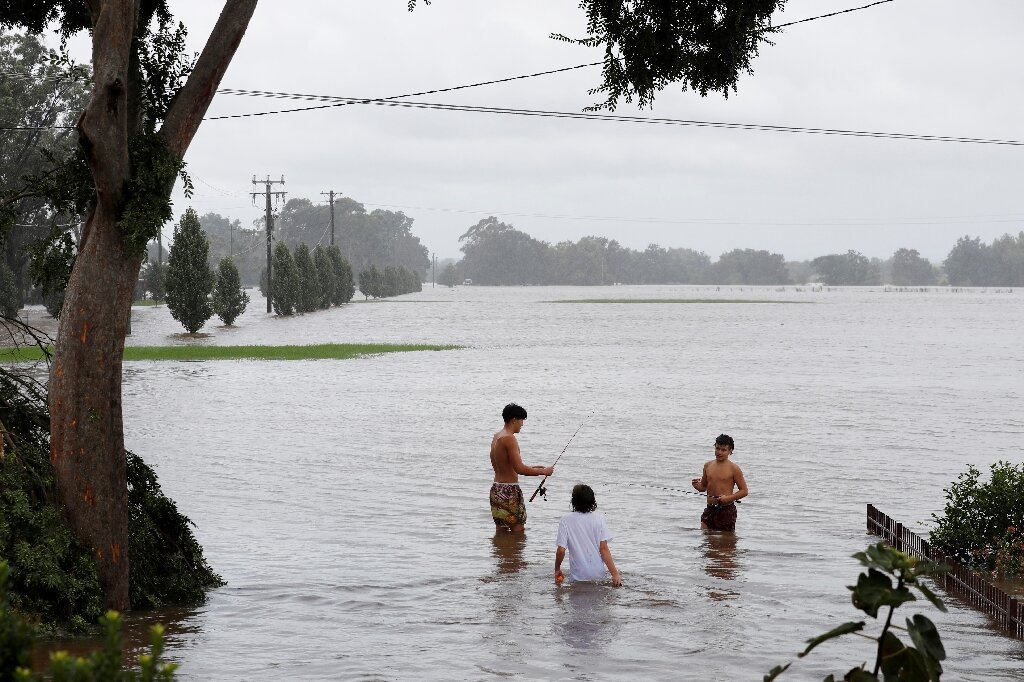 Australia’s emergency services Thursday ordered 200,000 people to flee from the path of a wild storm that has killed 13 people in a week of record-setting east coast floods, but the city of Sydney escaped the worst of the deluge.

Authorities issued severe rain and wind warnings for a 400-kilometre (250-mile) stretch of the coast as water levels rose rapidly—including in suburbs around Sydney, Australia’s largest city and home to five million people.

The unpredictable storm front has crawled southwards along the east coast from Queensland to New South Wales, creating havoc as rivers and reservoirs broke their banks with water swamping homes up to their roofs.

A low-pressure system sat off the coast hundreds of kilometres north of Sydney, dumping the heaviest rain in that area and sparing the city from a feared downpour, said meteorologist Ben Domensino of Weatherzone.

“Sydney escaped the heaviest falls today,” he told AFP, predicting that the storm would weaken by Friday.

The Warragamba Dam in southwestern Sydney, which supplies 80 percent of the city’s water, has been spilling over since the early hours of Wednesday.

The forecast of peak overflow at the dam was downgraded by nearly half on Thursday because rainfall in the dam’s catchment areas was less than had been predicted.

Major floods are still under way in some areas west of Sydney along the Hawkesbury and Nepean rivers—which snakes across the city’s suburbs—said a spokeswoman for the New South Wales bureau of meteorology.

“That’s a system that is very big and it will take a while for it to ease off,” she warned.

In the historic town of Windsor—where many of Australia’s oldest surviving European buildings are—Paul Caleo joined other locals watching the Hawkesbury River rise above the local bridge, cutting off access to homes and farms.

Across the submerged bridge, an almost 120-year-old home stood alone on high ground surrounded by floodwaters.

“The river by its very nature is unpredictable,” Caleo said.

Along Sydney’s historic harbour, Taronga Zoo prepared for an influx of injured wildlife from torrential rainfall and flooding.

The first fear was for young wildlife, small animals –- including echidnas and bandicoots -– and birds unable to escape surging floodwaters.

Heavy downpours can make birds’ feathers so waterlogged they are unable to fly, a spokeswoman told AFP.

As the floodwaters recede, concern will turn to the animals living in fresh water, including platypuses.

“Many people are waking up today to see much of our state underwater,” New South Wales Premier Dominic Perrottet said earlier in the day.

‘We will be with you’

“Australia is at the forefront of severe climate change,” said environmental expert Hilary Bambrick of the Queensland University of Technology.

Across New South Wales, flood levels have climbed to the highest level in decades during the flooding disaster.

In towns such as Lismore in the state’s northeast, which is now cleaning up as flood waters retreat, people had clambered onto their rooftops, sometimes waiting many hours to be rescued from rising waters.

New South Wales said it was sending an extra 400 personnel to that region to help people on the “very, very long road” to cleaning up and recovering.

Australians flee floods as toll rises to 12, Sydney on alert

This document is subject to copyright. Apart from any fair dealing for the purpose of private study or research, no
part may be reproduced without the written permission. The content is provided for information purposes only.