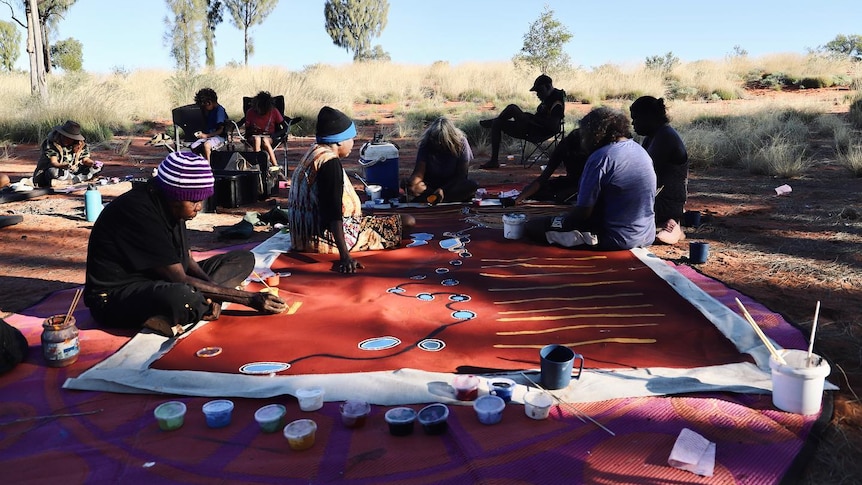 Cold desert nights, wide starry skies and a billycan hissing on the campfire in the lee of a red dune.

They are the special moments which artists and their families from the tiny community of Balgo love about trips into their traditional country to reconnect with the land and paint.

Centre manager Poppy Leaver said there were no bitumen roads where the artists trekked.

“It’s hundreds, if not thousands of kilometres away, with rolling sand dunes, rocky outcrops,” she said.

“You’ll get flat tyres, trailers with axles falling off and you never know what’s going to happen.”

Ms Leaver said painting stories as a group on large canvas rolled onto the sand was a special process.

“First, one of the senior artists mark out the bush track and put in each of those distinct water holes and main points along the Canning Stock Route,” she said.

“Then everyone starts to paint their little bit of country that they belong to.”

She said younger people and children then joined in.

“Through this time it’s silent and the birds are singing,” she said.

“People start talking in low, hushed tones and telling stories. Then all of a sudden you’ll get this crackle of laughter.”

The centre has secured a $300,000 grant from the Regional Arts and Cultural Investment Program to continue expeditions to Wilkinkarra (Lake Mackay) to create large scale artworks and multi media documentaries.

A key part of the Warlayirti X Wilkinkarra project will next month take young people onto their ancestral land for the first time and reunite families from across central Australia with the salt lake.

Helicopters will also be used to get to isolated parts of Wilkinkarra.