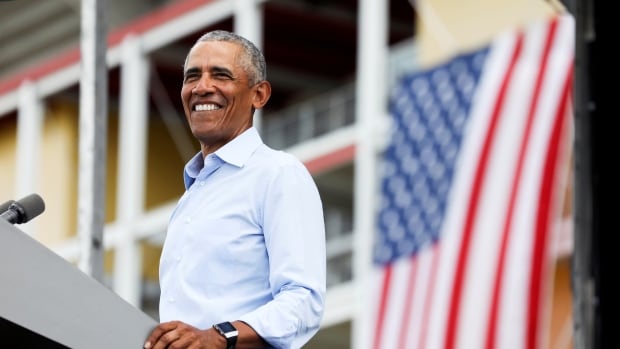 Former U.S. president Barack Obama has issued the annual summer reading list of his favourite books of 2022, which includes three Canadian authors among the 14 titles he shared on Twitter.

“I’ve read a couple of great books this year and wanted to share some of my favourites so far,” he wrote.

He also included Velvet Was the Night by Mexican Canadian writer Silvia Moreno-Garcia and the novel Mouth to Mouth by Canadian American author Antoine Wilson.

Mandel’s sixth novel, Sea of Tranquility, traverses time, space and reality. It follows a wide range of characters living in British Columbia in 1912 and on the moon in 2401 as they come into contact with a time traveller who must resist the pull to change the past and the future.

Mandel is a dual American Canadian citizen and currently lives in New York. She is also the author of 2020’s The Glass Hotel, which was shortlisted for the 2020 Scotiabank Giller Prize.

Her breakthrough novel was 2014’s Station Eleven, which was a finalist for a National Book Award and the PEN/Faulkner Award, won the 2015 Toronto Book Award and was turned into an Emmy-nominated series for HBO Max.

Set in 1970s Mexico City, Velvet Was the Night, which NPR called “a noir with a heart of gold,” follows Maite, a secretary, and Elvis, a rock’n’roll-loving goon, as they investigate the disappearance of Maite’s art-student neighbour Leonora — encountering hitmen, government agents and Russian spies along the way.

Velvet Was the Night is Moreno-Garcia’s seventh novel and was on the Canada Reads 2022 longlist. Born and raised in Mexico, she now lives in Vancouver. Her work has been recognized with a 2021 Aurora Award, a Goodreads Readers’ Choice Award and the Copper Cylinder Award.

Montreal-born Antoine Wilson’s third novel Mouth to Mouth is also on the list. The 2022 book explores themes of money, fate and morality through the eyes of an art dealer who confesses the real story behind his success.

Wilson is a Canadian-American novelist and short story writer based in California.

Obama, an avid reader, is an author himself of the bestselling 2020 memoir A Promised Land, which covered his swift and historic rise to the White House and his first term in office.

He regularly shares reading lists of his favourite books, recommending Mandel’s The Glass Hotel last year, and two Canadian titles in 2019: Warlight by veteran Toronto novelist Michael Ondaatje and Washington Black by Victoria-based Edi Edugyan, which was a finalist on Canada Reads 2022.

I’ve read a couple of great books this year and wanted to share some of my favorites so far. What have you been reading this summer? <a href=”https://t.co/K8bnTnmNaG”>pic.twitter.com/K8bnTnmNaG</a>