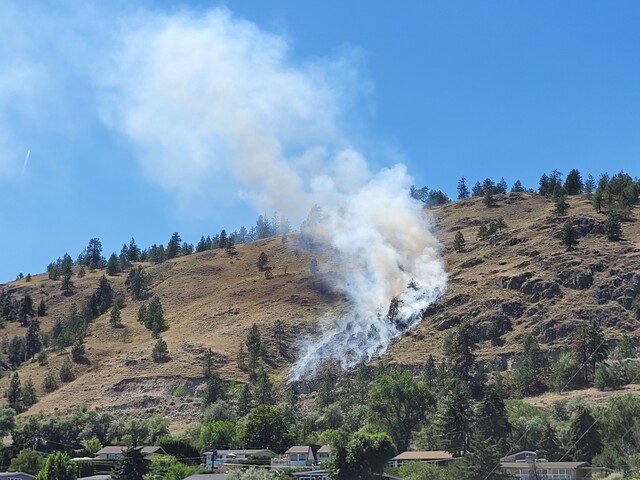 The BC Wildfire continues to attack the fire which has been named Mount Nkwala wildfire (K50758), located 3.5 km northwest of Penticton.

BCWS is on the scene along with Penticton Fire Rescue.

The wildfire is burning in sage and grass and is estimated to be two hectares in size.

Currently, there are eight firefighters, one officer, two helicopters and airtankers responding to this incident.

The wildfire is highly visible from Penticton and Highway 97.

BC Wildfire says they now have two helicopters on the scene.

“We also have three initial attack crews, a single response resource, the Penticton Fire Department is also on scene and we have an air tanker as well,” said fire information officer Melanie Bideau.

Heavy smoke can be seen on the West Bench, above the Penticton Golf and Country Club.

Several callers to the Castanet newsroom have indicated the fire broke out just after 2:00 p.m. there are Two fire trucks working the blaze but the fire is working its way up the bench, away from homes.

BC Wildfire Services has sent a single attack crew and a helicopter to battle the blaze.

Castanet will have more on this story as details become available.