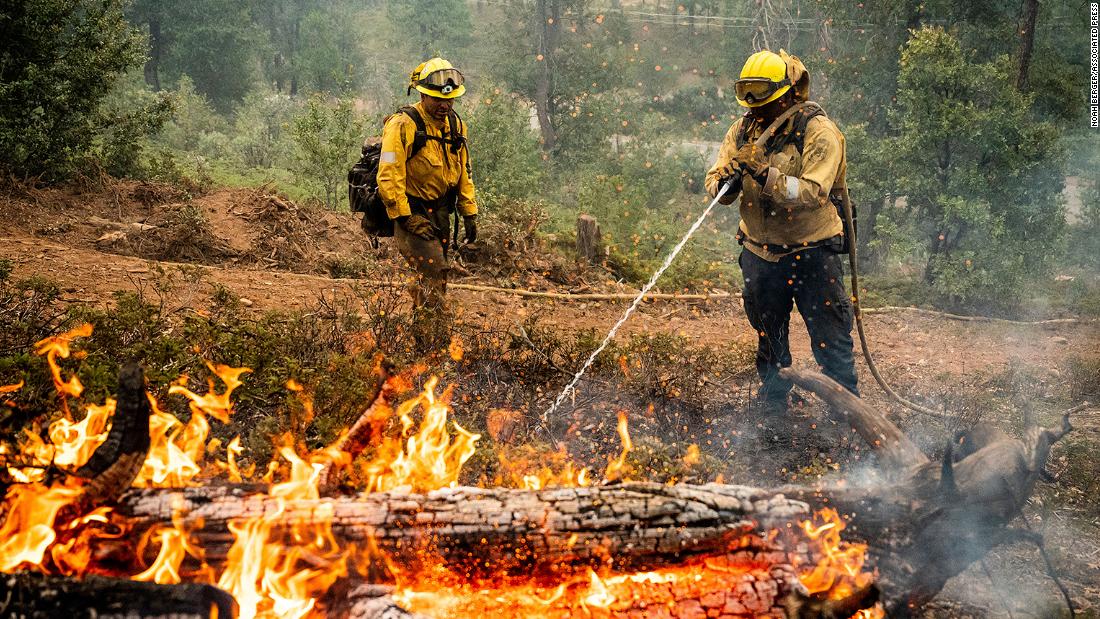 Crews made progress in their effort to rein in the fire Monday, slowing the burn’s expansion after the blaze exploded over the weekend, though it is still just 16 percent contained, state fire management agency Cal Fire said. More than 2,400 structures are still threatened, according to the agency.

“It was a successful day for aircraft and firefighters, resulting in minimal growth on the fire,” Cal Fire said Monday evening, adding, “Crews continue to construct control lines and extinguish hot spots along existing lines.”

“The footprint out here, the acreage of available fuels to burn when the fire gets going, along with the available topography — the canyons, the drainages — the wind that flows through these areas, can make the fire behavior erratic and it can explode … the ferociousness of that fire at times can be intense,” Wade said.

So far this month, there have been 23 wildfires in California, according to Cal Fire, but only three have exceeded 500 acres. None have come close to the mass destruction of the Oak Fire, due in part to the exceedingly dry conditions in the area, Wade said.

“I think the real difference that firefighters are experiencing on this one is how dry everything is, it’s definitely been (drier) as the years have been going on,” he said. “We’ve noticed that there seems to be less precipitation, less moisture and the available fuel load is definitely out there.”

“The reality is, it’s moving so quickly, it’s not giving people a lot of time and they are sometimes just going to have to evacuate with the shirts on their back,” Heggie said.

The incremental progress made by fire crews has allowed officials to reduce evacuation orders in some areas to fire advisements, Cal Fire said.

At least 3,000 people were forced to flee their homes over the weekend, per a Saturday news release from Gov. Gavin Newsom’s office. An evacuation shelter has been set up at Mariposa Elementary School for displaced residents.
Mariposa county has been under a state of emergency since Saturday, when Newsom announced the proclamation.
Southern California fire officials have been expecting this summer to bring an especially challenging fire season due to the increased frequency of wildfires and the dry, hot conditions in much of the state.

California is among the western states that have been suffering under a prolonged megadrought that has been heavily exacerbated by the climate crisis.

“That dead fuel that’s a result from that climate change and that drought is what’s driving these, what we are now calling, ‘mega fires,'” Heggie said.

It’s not just the Western US dealing with extreme fire conditions. Wildfires around the globe have intensified and become more commonplace, according to a report from the UN Environment Programme. The report’s analysis found that the number of extreme wildfire events will increase by 30% by 2050.

The report suggested it’s time we “learn to live with fire,” urging authorities and policymakers to cooperate with local communities to use Indigenous knowledge and invest in planning and prevention efforts.