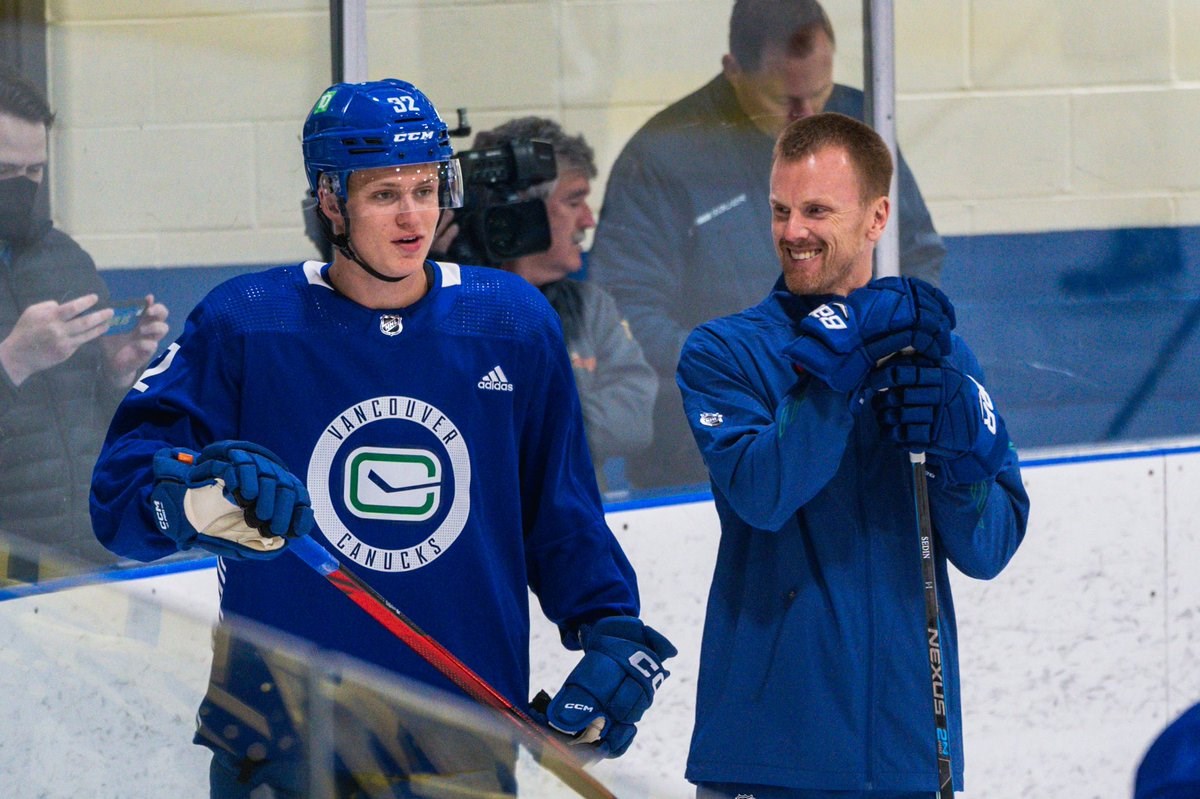 “Maybe it’s better to have the camp in Sweden next time,” joked defenceman Filip Johansson at the Canucks camp.

There were ten Swedish prospects at the Canucks’ development camp , along with prominent Swedish staff members Mikael Sameulsson and Daniel and Henrik Sedin. Three of those prospects were also invited to Sweden’s World Junior camp: Jonathan Myrenberg, Lucas Forsell, and Elias Pettersson — the defenceman, not the forward.

Jonathan Lekkerimäki, the Canucks’ first-round pick at the 2022 draft, isn’t on Sweden’s camp roster but that isn’t a cause for alarm. In fact, it’s a good sign. This is an evaluation camp, after all, and there’s evidently nothing to evaluate for Lekkerimäki — he’s going to be on the team.

In fact, Lekkerimäki will be on Sweden’s roster for the postponed 2022 World Juniors, which will take place August 9-20 in Edmonton, Alberta.

Myrenberg, Forsell, and Pettersson have a tougher path to making Team Sweden for the 2023 World Junior Championships, which will be held in Halifax, Nova Scotia and Moncton, New Brunswick starting on December 26. There are 46 players at the evaluation camp, all vying for the limited spots on the roster.

Still, it’s a good sign that Myrenberg, Forsell, and Pettersson have even been invited to participate.

Myrenberg: “He always keeps his head up.”

Myrenberg was a fifth-round pick in 2021 and is arguably the best right-handed defenceman in the Canucks’ system, though that perhaps speaks more to the lack of depth in the prospect pool at that position than Myrenberg’s ability. That said, Myrenberg has quietly developed into a player with some legitimate NHL potential, with some slick offensive skill to go with a strong defensive game.

With his size, smooth skating, and alert play, Myrenberg was a standout performer at the team’s development camp.

“He always keeps his head up, it’s definitely good,” said Samuelsson about Myrenberg to CanucksArmy’s Chris Faber. “I’m impressed by him, I knew he saw the game well and I think it’s because he keeps his head up a lot.”

Myrenberg spent a bit of time in the SHL last season but will be heading to the Allsvenskan next season — Sweden’s second-tier men’s league. That will allow him to get more ice time and play in more situations, helping his development.

“I spoke to him already about it and he doesn’t see it as a drop-down,” said Samuelsson. “He is thinking about his career and how to be the best he can be in three to four years. That’s going to be his focus.”

Playing a larger role in the Allsvenskan might help him get noticed more readily by Sweden’s talent evaluators for the World Juniors.

A seventh-round pick like Forsell getting invited to Sweden’s camp is great to see. As a September birthday, Forsell was one of the youngest players in the 2021 draft and taking a chance on such a young player with more runway to develop seems to be paying off for the Canucks.

Forsell had a decent season in the J20 Nationell, Sweden’s top junior league, with 34 points in 35 games. More impressively, he spent 30 games with Färjestad in the SHL, Sweden’s top professional league. He may have only had 6 points but playing 30 games in the SHL as an 18 year old is a positive sign.

Forsell even had some power play time and more than held his own at even-strength with a 52.61% corsi.

At Canucks camp, Forsell did everything at high pace and was extremely enthusiastic about being in Vancouver, calling the Canucks jersey “the best colours in the NHL.” He was also realistic about where he needs to improve the most.

“I’m not the biggest guy, not the strongest,” said Forsell. “So, work on my strength, like puck protection along the boards, that’s a big part of pro hockey. That’s something we work on every day in Färjestad. I’ve worked really hard on my strength and I feel like it has paid off.”

Forsell said his goal for the coming season was to improve his consistency from game to game so he can be a reliable every day player for Färjestad and work his way onto one of the top three lines. Now he can also set a goal of making Sweden at the World Juniors.

Pettersson: “He’s tough to play against.”

As a third-round pick, it’s perhaps a little less surprising that Pettersson was invited to Sweden’s evaluation camp. The smooth-skating defenceman has already been on Team Sweden at the World Under-18 Championships and was already on Sweden’s World Junior radar before the Canucks selected him in this most recent draft.

Pettersson is a two-way defenceman but his strengths lean more heavily towards the defensive side of the ice, which is what got him into 17 games in the SHL with Örebro in his draft season.

When asked about the strengths of his game, Pettersson quickly pointed to his skating, but his friend at camp, Lekkerimäki, had a different review.

When talking to Pettersson, he’s so softspoken that it belies the heavy, physical game he brings in the defensive zone. He’s far more assertive with opposing forwards that encroach on his space than on members of the media that do the same in a scrum.

“I’m trying to be tough and play hard out there,” said Pettersson humbly. “I think that’s one of my strengths also in the game.”

“I think when last year I was playing in the SHL with the big guys, my coach told me I need to be hard out there,” he added. “I learned so much last year [about how to] be tough and I’m gonna stand up for myself.”

When asked if he’ll be playing in the SHL next season, Pettersson started with the humility.

“I don’t know. I will see,” said Pettersson, then smiled and confidently said, “Yeah, I’m going to play in Örebro next year.”

Jacob Truscott has also been invited to Team USA’s camp

There is one other Canucks prospect at a World Junior evaluation camp: Jacob Truscott with Team USA.

That’s nice to see from the 2020 fifth-round pick. Even though he’s already 20 and not eligible for the 2023 World Juniors in December, there’s a chance he makes the team for the postponed 2022 World Juniors in August.

Truscott had a solid, though not spectacular, sophomore season at the University of Michigan, putting up 17 points in 40 games. Along the way, he evidently added more of a physical element to his game, which he aptly demonstrated at the Canucks’ development camp.

That’s a welcome development from Truscott, who had some question marks on the defensive side of his game when he was drafted. Adding more physicality to his defence definitely makes him more projectable as a prospect.

Truscott is likely to play a much bigger role with Michigan as a junior and is aiming for a breakout season. At that point, it will be interesting to see if the Canucks look to sign him to an entry-level contract before his senior year.