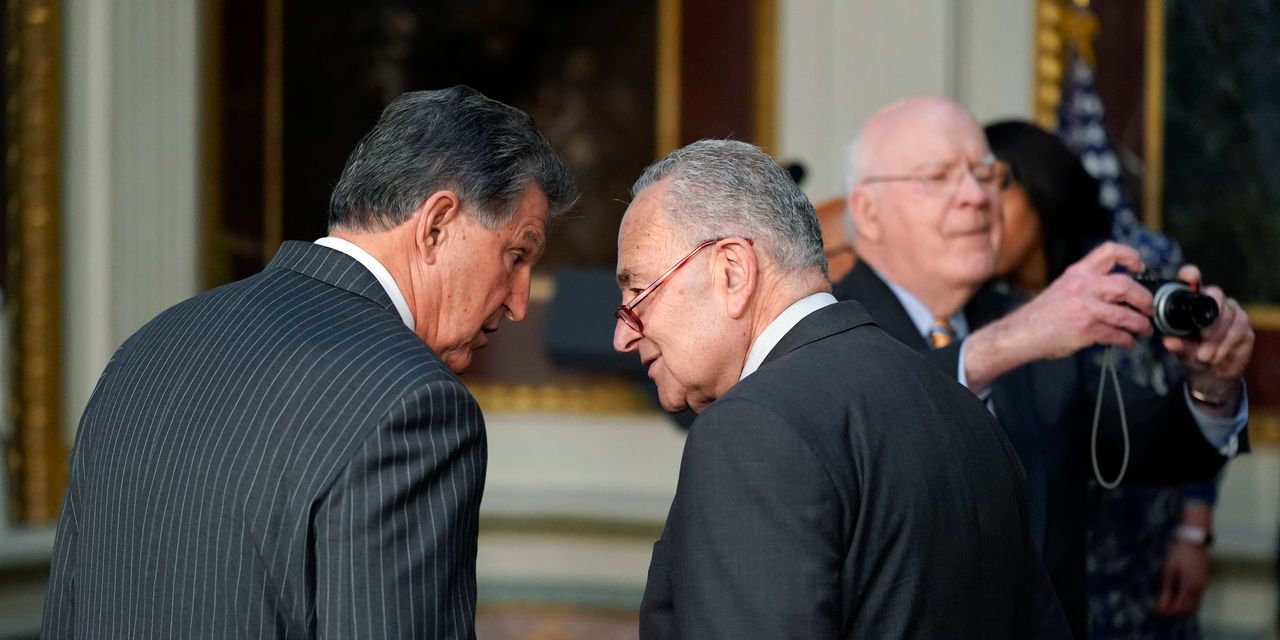 Senate Democrats are trying to get some of the wealthiest people on Wall Street to pay more in taxes, but that may not be as simple as they hope.

The last-minute deal between Sens. Joe Manchin (D., W.Va.) and

(D., N.Y.) struck late Wednesday included a tax increase on carried-interest income, which private-equity and hedge-fund managers receive when their investments are sold for a profit. Under current rules, carried interest on investments held at least three years can qualify for long-term capital-gains tax rates, which are well below those applied to ordinary income.

A lot is at stake for the industry’s top brass: The tax increase is estimated to raise $14 billion over a decade. The 28 named executives at five of the biggest publicly traded private-equity firms together received close to $760 million in carried interest compensation in 2021, according to securities filings.

Carried interest is generally taxed at the long-term capital-gains rate, which is up to 23.8% for top earners. The ordinary income rate for those filers is 37%.

Many public-company executives, including Mr. Schwarzman, reap far more from dividends on holdings of their firms’ stocks than they do from carried interest. Still, there are thousands of other managers who count on carry for the bulk of what they take home. Hedge-fund managers are also commonly compensated with carried interest, though many already pay a higher tax rate on that income because they tend to hold assets for shorter periods of time.

With billions of dollars at stake, private-equity firms—armed with top-flight lawyers and accountants—are now scrambling to figure out how to best position themselves and their funds to avoid having to pay up should the bill pass. Democrats are trying to get the bill through the Senate in early August and to President Biden’s desk shortly after that.

Tax experts, including many who support ending the special treatment of carried interest, say the way the provision is structured leaves too much room for interpretation and manipulation. The bill’s success rests heavily on whether regulators at the Internal Revenue Service and the U.S. Treasury can quickly write rules that make it easier to understand and can then effectively enforce them. Neither one is a given, though the bill also includes about $80 billion in additional IRS funding aimed at tightening tax enforcement broadly.

“History says it’s not likely,” said Monte Jackel, a lawyer at tax advisory firm Leo Berwick and a former IRS official. “They’re overmatched when it comes to dealing with the super-big accounting firms.”

As for the private-equity firms, he said, “there’s so much money involved, there’s no way they’re laying down and saying, ‘Oh, you got me.’”

The crux of the issue is that the bill uses the amount of time an asset is held to determine how it should be taxed. Most capital gains on assets like stocks qualify for long-term rates after a one-year holding period. The 2017 tax law signed by former President

a Republican, extended that to three years for the taxation of carried interest.

The Democrats’ bill makes that five years. But unlike the current law, it starts counting the holding period when a fund has acquired “substantially all” of its investments, not when it first makes an investment.

There is no clear definition of “substantially all,” which could make it complex to even know where to begin counting, tax attorneys say. It is also unclear which assets would qualify for the five-year treatment and whether funds that can hold assets indefinitely—an increasingly popular structure—would be treated in the same way.

Critics say the bill leaves room for firms to employ workarounds such as “carry waivers,” which allow managers to decline to take carried interest on a certain deal and instead take it on a later deal, when income might be eligible for more favorable tax treatment. The bill explicitly authorizes the Treasury to issue regulations or other guidance to prevent the use of such tools to avoid taxes, but it remains to be seen how any rules will be drafted.

Funds might also try to find a way to accelerate the start of the holding period by creating separate vehicles to hold investments, while leaving the fund economics tied together in a way that is similar to a current fund structure.

Another unintended consequence of the holding-period framework could be that private-equity managers simply wait longer to sell companies, said Victor Fleischer, a tax-law professor at the University of California, Irvine, whose academic work 15 years ago focused public attention on carried interest. This could lead to mismatched incentives between managers, who count on carried interest for their compensation, and their investors, who aren’t affected by it and who might benefit from a quicker sale.

For Mr. Fleischer, a former Senate Democratic aide, the bill as it stands won’t shut down the favorable treatment of carried interest.

“They’re not closing the loophole so much as putting some tissue paper over the hole and hoping it holds,” he said.

—Richard Rubin contributed to this article.

Write to Miriam Gottfried at Miriam.Gottfried@wsj.com