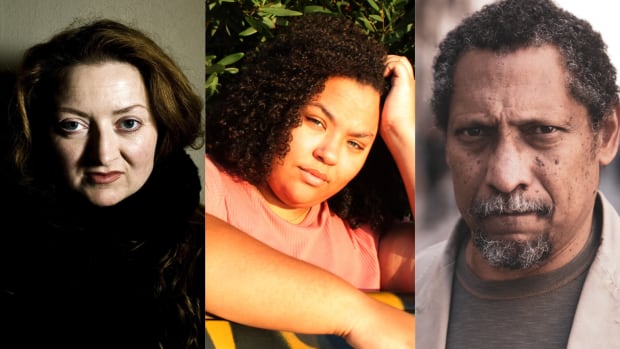 Claire Keegan, Leila Mottley and Percival Everett are among the 13 authors who have made this year’s Booker Prize longlist.

The £50,000 ($77,467 Cdn) Booker Prize annually recognizes the best original novel written in the English language and published in the U.K.

Small Things Like These explores themes of complicity and human decency. At 116 pages, it is the shortest book to be recognized in the prize’s history.

Set in Ireland in the mid-1980s, Small Things Like These is a moving tale of faith, forgiveness and the authority of the Catholic Church. The book’s protagonist, Bill Furlong, is faced with a moral dilemma when he discovers a shivering, ragged girl locked in the shed of a local convent.

Small Things Like These won the 2022 Orwell Prize for political fiction and was also a 2022 Rathbones Folio Prize finalist for the best literary work of the year.

Writers and Company1:05:50Claire Keegan’s Small Things Like These is a story of moral crisis, heroism and the human heart

Claire Keegan’s beautifully wrought fiction is remarkable for its subtlety and emotional depth. Her new novel, Small Things Like These, has won high praise and was on many best-of-the-year lists in Britain. Set during a time of economic hardship and the authority of the Catholic Church in 1980s Ireland, Small Things Like These is a moving story of complicity and human decency.

Keegan is the Irish author of prize-winning short fiction, including two story collections, Antarctica and Walk the Blue Fields.

Mottley is longlisted for her debut novel, Nightcrawling.

Nightcrawling is a novel about race, class and economic insecurity. The novel follows Kiara and her brother Marcus, who live in a run-down East Oakland apartment complex.

One night, what begins as a drunken misunderstanding with a stranger turns into a job Kiara never imagined wanting but now desperately needs: nightcrawling or sex work.

Mottley is an American author based in California. She was the 2018 Oakland Youth Poet Laureate and her work has been featured in the New York Times and Oprah Daily.

She is the youngest author to ever be longlisted for the Booker Prize.

Everett is longlisted for novel The Trees.

The Trees is Everett’s 22nd novel.  Following a series of brutal murders in the rural town of Money, Mississippi, a pair of detectives from the Mississippi Bureau of Investigation arrive only to meet resistance and a string of racist white townsfolk.

As similar murders occur across the country, the detectives suspect the killings are a wave of retribution for Emmett Till and the brutal legacy of lynching in the American South.

Writers and Company1:00:29Percival Everett’s The Trees imagines a world where the horrors of lynching are avenged

In 1955, the murder of 14-year-old Emmett Till in Money, Mississippi brought nationwide attention to racial violence and injustice. The perpetrators were never punished. But in Percival Everett’s powerful new novel, The Trees, that history comes back to haunt Money’s white townsfolk, in a wave of retribution for the brutal legacy of lynching in the American South.

Everett is an American writer based in Los Angeles and a professor of English at the University of Southern California. In addition to writing more than 30 books, he’s also an accomplished visual artist and has worked for 12 years training horses and mules.

The complete 13-book longlist is:

“All 13 books, of course, reflect — and reflect on — the preoccupations of our planet over the last few years. Unsurprisingly, in the wake of the pandemic, they address how we imagine disease as a living enemy to be fought on a daily basis, questions of racial and gender injustice and the fragility of the political order,” said jury chair Neil MacGregor in a press statement.

Since 2013, authors from any nationality have been eligible. No Canadians were recognized for the 2022 prize. Canadian authors Mary Lawson and Rachel Cusk made the Booker Prize longlist in 2021.

Margaret Atwood shared the 2019 prize with British novelist Bernardine Evaristo. Atwood was recognized for her novel The Testaments, and Evaristo for her novel Girl, Woman, Other. They split the prize money evenly.

Two other Canadians have won the prize since its inception in 1969: Michael Ondaatje in 1992 for The English Patient and Yann Martel in 2002 for Life of Pi.