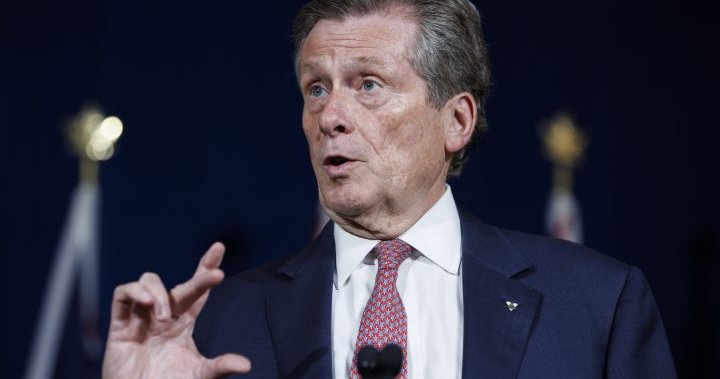 Toronto Mayor John Tory faces the possibility of an integrity commissioner investigation on the eve of the city’s upcoming municipal election.

A complaint, submitted by a community activist, alleges Tory has a conflict of interest over his ties to Rogers Communications and a council decision to end regular ActiveTO road closures on Lake Shore Boulevard West.

Tory’s office told Global News they had not received any communication from the city’s integrity commissioner and said the mayor did not have a conflict.

The story was first reported in the Toronto Star on Tuesday.

The Blue Jays are owned by Rogers Communications.

Tory is a member of the Rogers Control Trust Advisory Committee, which “exercises control over the RCI shares held by the Rogers family,” the complaint says.

Tory’s connection to the late Ted Rogers is a longstanding one that dates back to his father. The mayor also previously ran the company’s cable division.

Tory confirmed to reporters in October he receives compensation for his role on the trust, but said he has abided by the law scrupulously every day.

“At all material times, Mayor Tory had an indirect pecuniary interest in the Toronto Blue Jays, by virtue of his involvement with the Rogers family trusts,” the complaint, which has been seen by Global News, said.

The closure of Lake Shore Boulevard West for ActiveTO became a lightning rod for debate between cyclists and drivers in Canada’s most populous city.

They began in 2020 in response to pandemic lockdowns. The eastbound portion of the six-lane road was shuttered on weekends to allow open access to the waterfront, a space where residents could exercise and social distance at the same time.

Those closures continued during 2021 although less frequently and happened twice in 2022: on May 23 and May 29.

In his letter to Toronto councillors, urging them to scrap ActiveTO closures on Lake Shore Boulevard West, Mark Shapiro, CEO of the Toronto Blue Jays, said the closures were a nightmare for fans.

“On the days when ActiveTO has been in effect on Lake Shore, our local fans have experienced significant transit delays because traffic is grinded to a halt on all downtown routes,” his letter said.

In a report to council, city said that when the road was closed for ActiveTO on May 23, travel times along the Gardiner Expressway between Highway 427 and York Street increased from 14.5 minutes to 33.6 minutes.

The complaint points out that Tory has, in the past, declared a conflict of interest on issues and decisions involving Rogers. The complaint estimates this has happened on “at least 30 items since March 1, 2019.”

The Municipal Conflict of Interest Act, which governs council members, specifies that elected officials must declare any financial interest they have on an item considered by council and not take part in either a discussion or vote on the topic.

“This vote was about a City program that the Mayor introduced and championed throughout the pandemic and this was a very broad public issue involving all road users in the city,” Tory’s office said.

The complaint asks Toronto’s integrity commissioner to fast track the complaint for a decision to be rendered ahead of the municipal election on Oct. 24.

It also states that if the integrity commissioner concludes Tory violated the provincial legislation, the commissioner must refer the case to an Ontario judge.

Global News contacted the city’s integrity commissioner to ask if the complaint had been received and if an investigation would be started. No response was received at the time of publication.

Tory has declared he will run for a third term as Toronto’s mayor. Rival candidates include Gil Penalosa and Sarah Climenhaga.