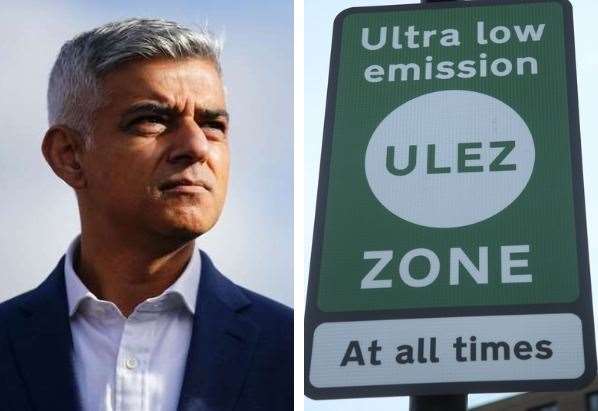 People living and working close to the London boundary with Kent have slammed plans to extend the Ultra Low Emission Zone (ULEZ) as a money grab on Kent motorists.

Transport for London (TfL) is consulting on expanding the area to cover the whole of Greater London from August 2023.

If approved, it would mean drivers of older, more polluting vehicles in Dartford heading over the border into neighbouring Bexley would have to fork out £12.50 a day.

The London Mayor says he is waging “war on poisonous air” and tackling toxic fumes in and around the capital through the scheme.

But motorists in Kent have dismissed the charge as “another tax”, claiming it discriminates against those unable to invest in newer eco-friendly cars or afford the “considerable costs” involved amid the cost of living crisis.

Many streets in Dartford straddle the border with the London borough of Bexley and for some residents the ULEZ will be “unavoidable”.

Residents living in Bowmans Road are faced with the choice of turning left and onto Dartford Heath, or right and into Crayford, which forms part of Bexley.

Bryan Lydon, 52, has a 2014 diesel Hyundai which would fall foul of the new requirements should ULEZ be extended.

The 52-year-old resident said: “We are going to have to change our vehicle or incur considerable costs.”

He agrees urgent action needs to be taken to address the climate crisis but believes people should be afforded more time, particularly in light of the cost of living crisis.

“Look at the fires we have had last week,” he said. “Something needs to be done. However you can’t just set it out for a year’s time.

“You need two to two-and-a-half-years to plan ahead. Buying a vehicle is the second biggest cost after your house.”

“We are not a London borough yet Sadiq Khan wants us to pay for the ULEZ.”

Neighbour Edward Hawkes, 55, believes it is “unfair” to impose a tax on Kent motorists who have no say over the charge.

He has recently moved from Bexleyheath to Dartford and would face having to scrap his diesel motor should the ULEZ be expanded.

“When you think about it, just to go to Crayford Sainsbury’s, which is only a mile away, it is going to cost you £12,” he said.

“It is stopping me from going into London where I would have gone just to pick something up.

“We are not a London borough, yet Sadiq Khan wants us to pay for the ULEZ. It is another tax London is trying to give everyone.”

Mr Hawkes also believes it could have an impact on local businesses, who may miss out.

But cafe boss Gurjit Randhawa, owner of two Esquires Coffee shops either side of the border in Dartford and Crayford, is remaining upbeat.

“It will have an impact on some people, for sure,” said Gurjit. “But hopefully, being positive, I don’t think it will have much of an impact on my business as much as it will on others.”

The franchise owner believes his customer base will be largely unaffected but suppliers and market traders in Dartford could be hit.

“One of my suppliers has to buy a new lorry,” Gurjit added. “Even now when he goes to Spitalfields Market he takes a slightly different route.”

MPs and councillors from across the political divide in Dartford have widely condemned the mayor’s plans.

Dartford MP Gareth Johnson is a vocal critic of ULEZ’s extension which he says will leave thousands of people “financially disadvantaged”.

Earlier this month he wrote to TfL outlining his concerns.

The Conservative MP said: “Many streets in Dartford border London and if the ULEZ is extended it will mean people in Dartford, who have to cross into London to simply leave their homes, will be charged.

“Effectively, they will be forced to pay this daily charge or a receive a fine from a council area they do not live in nor do they elect.”

Mr Johnson, a government whip, also criticised the absence of a scrappage scheme for residents in Dartford with only “Londoners” eligible.

He believes this is simply another way for financially-hit TfL to raise extra funds and does not believe it is fair to levy such charges on Dartford residents.

“As I have said before, this is a stealth tax on Dartfordians and will hit the poorest the hardest,” Mr Johnson added.

“This would be a tax imposed on Dartfordians, who have no say in what the London mayor does as they do not vote for him.”

Concern over the lack of help for low-income motorists has prompted calls for TfL and the mayor to delay its extension.

Councillors in Dartford have also joined calls to pause the planned expansion, stressing the harmful financial impact on residents.

Leader of the Labour Group, Cllr Kelly Grehan said: “Everyone in Dartford knows our town suffers from dangerous levels of air pollution, so we want to see a decline in traffic levels and levels of pollution.

“However, we do not believe expanding the ULEZ zone at this time is the right way to do it.

“We cannot support any measure that may result in making it more expensive for ordinary working people to travel to their jobs.”

“In the middle of a cost of living crisis, many Dartford residents are experiencing pressure on their household budgets and simply will not be able to afford the additional cost of the proposed daily charge to drive to work.

“We cannot support any measure that may result in making it more expensive for ordinary working people to travel to their jobs, many of whom are the essential workers who helped keep London moving throughout the pandemic.”

She also believes families shouldn’t be asked to “bear the brunt” of the costs, after a Freedom of Information request revealed it would cost £200 million to implement the latest expansion.

According to a new report from TfL the extension has so far had very little impact with no change in levels of pollutants since it expanded to the North and South Circular roads in October, although roadside nitrogen dioxide levels have dropped by 43% since 2017.

TfL believes if a larger zone was introduced, it would have a significant impact by the end of 2023.

A TfL spokesman said: “A larger ULEZ is vital for those living in the capital, especially those in outer London where air pollution has not fallen as fast as in central and inner London.

“It will also benefit those living outside it. In 2019, toxic air contributed to more than 4,000 premature deaths in the capital, with the greatest number in outer London, and we urgently need to address this issue.

“More extreme weather events are predicted if the world fails to act to reduce carbon emissions, with these already being seen in the high temperatures that are currently being experienced.

“We recognise that we need to help people shift to cleaner vehicles and the Mayor invested £61m to support people do that for the existing ULEZ schemes.”

By the time the ULEZ is introduced it is expected around 95% of vehicles will be compliant.

The mayor has said he will deliver “as large a scrappage scheme as is feasible” and will consider views expressed as part of the consultation as to what its scope and criteria should be.

It’s the final week to have your say on the plans, with a consultation running until Friday. Click here to have your say. To check whether your vehicle is covered by the charge click here.

Plans for an ultra–low emissions zone were first laid out by then mayor Boris Johnson and taken forward by his successor, Mr Khan.

The ULEZ has operated since April 2019, but previously only covered the same area of central London as the Congestion Charge.

It now includes all areas within the North and South Circular roads in an attempt to boost air quality.

TfL says the cash it receives from the ULEZ is reinvested into improving London’s transport network and to improve air quality. It insists “we don’t make a profit” from the scheme.