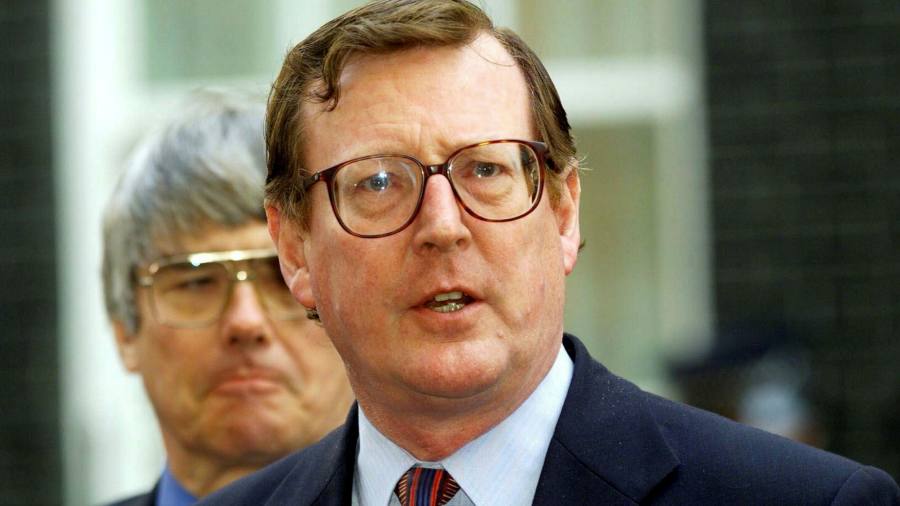 Lord David Trimble, a key architect of the Good Friday Agreement who defied opposition from within his community to help secure peace in Northern Ireland almost a quarter of a century ago, has died after a short illness. He was 77.

Tributes to the courage of the Nobel peace laureate and former leader of the then dominant Ulster Unionist party, who became Northern Ireland’s inaugural first minister after the 1998 Good Friday Agreement, poured in after his death on Monday.

Sir Tony Blair, the UK prime minister who signed the peace accord, said Trimble’s contribution had been “immense. It wouldn’t have happened without him”.

Former US president Bill Clinton, whose eleventh hour telephone calls to Trimble and other key figures rescued the deal, said: “Time after time during the negotiations that led to the Good Friday Agreement, he made the hard choices over the politically expedient ones because he believed future generations needed to grow up free from violence and hatred.”

A lawyer by training, known as shy and determined if sometimes prickly and with a ferocious temper, Trimble called the Good Friday Agreement — which marks its 25th anniversary next April — “the greatest thing in my life”.

The accord ended three decades of conflict in Northern Ireland by nationalist paramilitaries fighting to end British rule and loyalist gunmen battling to keep the region part of the UK.

While enduring divisions remain, with the institutions set up by the Good Friday Agreement currently paralysed in a political row over post-Brexit trading arrangements, the accord marked a watershed moment.

“David faced huge challenges when he led the Ulster Unionist party in the Good Friday Agreement negotiations and persuaded his party to sign on for it,” said Gerry Adams. As leader of Sinn Féin — then widely considered to be the political wing of the paramilitary IRA — Adams was key to securing hardline republican support for the agreement.

Trimble’s contribution “cannot be underestimated”, said Adams, adding that the two met many times and got to know each other quite well.

Trimble notably threw down the gauntlet to him in 1997, when he narrowly clinched his party’s agreement to share power even before the IRA decommissioned its weapons. He told the Sinn Féin leader: “We’ve done our bit. Mr Adams, it’s over to you. We’ve jumped; you follow.”

Bertie Ahern, Ireland’s taoiseach at the time of the agreement, said simply: “If David didn’t bring the [Ulster] Unionist party with him, then we didn’t have an agreement.”

In sentiments echoed by politicians of all sides across the region and in Ireland, Michael D Higgins, Ireland’s president, said Trimble had earned a “distinguished and deserved place in our history books”.

Sir Jeffrey Donaldson, who defected from the UUP and whose Democratic Unionist party is now the largest pro-UK force in Northern Ireland, hailed Trimble’s determination despite “a considerable risk to his safety . . . He can undoubtedly be said to have shaped history in our country”.

“Throughout, he faced unending onslaught from people in his own community — I know because we faced many of these audiences together — and ultimately he didn’t buckle. He was a courageous man who has earned his place in history.”

A canal boat enthusiast with a wry sense of humour who adored Elvis Presley and Wagner, Trimble started out in politics with the small loyalist Vanguard party in the 1970s. His career took off after he was elected to Westminster for the UUP in 1990.

He gained prominence leading the controversial Drumcree parade by the loyalist Orange Order in 1995. After clashes in previous years, the parade went ahead after a tense stand-off and Trimble joined hands in the air with the then DUP leader Ian Paisley in what some saw as a triumphant gesture.

He became the surprise UUP leader later that year, eventually charting a course from hardliner to peacemaker. Trimble’s reward for the peace deal, however, was the loss of his Westminster seat. He was defeated by more than 5,000 votes in 2005 and the UUP’s support collapsed, prompting him to resign as party leader.

Trimble backed UK prime minister Boris Johnson’s Brexit deal, which sparked the current political stand-off. In May, he wrote in the Daily Telegraph that it was London’s “responsibility to safeguard the future of Northern Ireland and replace this damaging and community-splitting protocol” — a reference to the controversial trading arrangements for Northern Ireland.

Accepting the Nobel Prize in 1998, which he was awarded jointly with John Hume the late leader of the nationalist Social Democratic and Labour party, Trimble said he was sometimes accused of lacking “the vision thing”.

He hailed “politicians of the possible . . . who seek to make a working peace, not in some perfect world, that never was, but in this, the flawed world, which is our only workshop”.