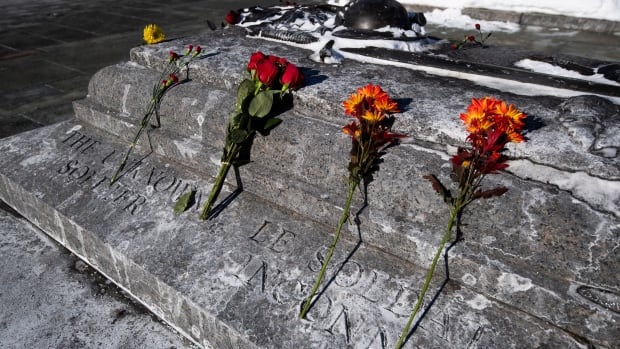 Canada’s national defence minister is decrying what she’s calling a “desecration” of a monument meant to honour fallen Canadian soldiers.

In a Monday afternoon tweet, Anita Anand said she was “disturbed” by an incident at the Tomb of the Unknown Soldier, which is located at the National War Memorial site in downtown Ottawa.

Anand didn’t describe the events, but posted her tweet after images, including a video slideshow, of an American flag draped over the tomb circulated on social media.

“The right to protest is something those honoured at the Tomb sacrificed their lives for, however the desecration of this memorial is unacceptable and shameful,” she wrote in her tweet.

I am disturbed by yesterday’s events at the Tomb of the Unknown Soldier. The right to protest is something those honoured at the Tomb sacrificed their lives for, however the desecration of this memorial is unacceptable and shameful.

The Ottawa Police Service said it was aware of a video made on Sunday. The police force added it would be consulting with Crown lawyers about what to do next.

It’s not the first time conduct at the memorial site has come under scrutiny this year.

During this past winter’s Freedom Convoy protests, a woman danced on the tomb. Police identified her but did not charge her, saying she had been spoken to and showed remorse.

According to the Department of National Defence, the Tomb of the Unknown Soldier is a monument containing the remains of an unidentified Canadian soldier who had been buried near Vimy Ridge in France during the First World War.

“The Tomb and the National War Memorial are open to all visitors who wish to take a moment of reflection and contemplation on the sacrifices made by our military community,” DND said in an emailed statement on Monday.

“It is considered sacred ground and a symbol of sombre tribute that should be respected by all who visit it and not used for messaging for any ideological perspective.”