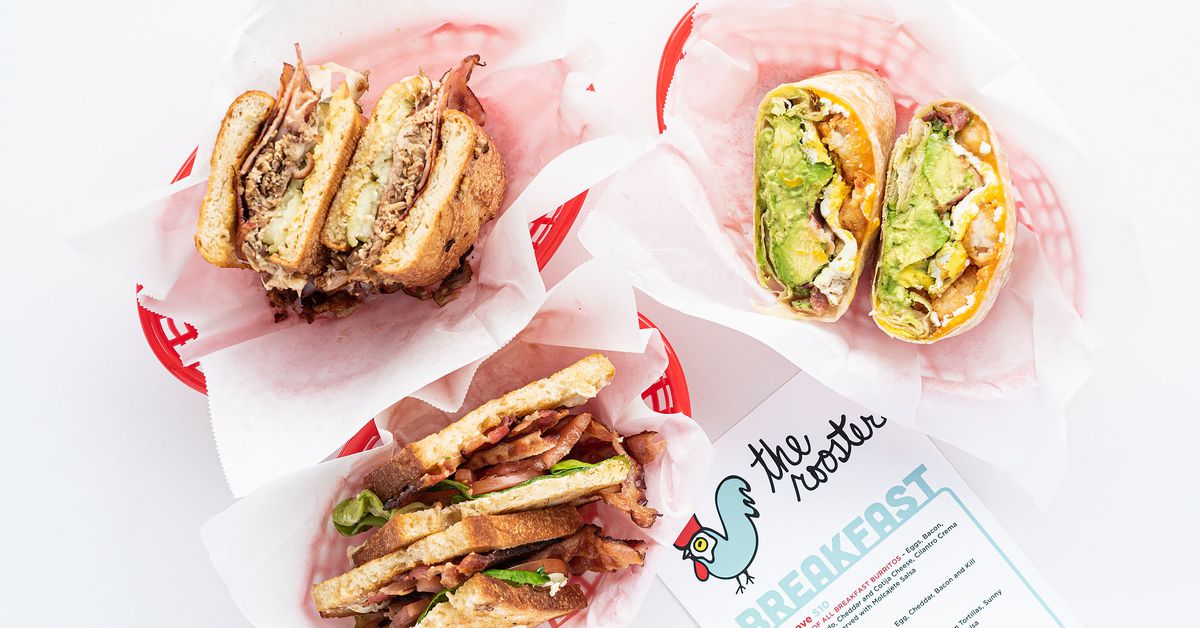 Breakfast has a certain kind of cadence in Los Angeles. For some it’s all about convenience, eschewing quality and taste for something super easy (think tamales at the bus stop) and perhaps even healthy (juice bars and smoothie shops, anyone?). For others with a little more free time on their hands, breakfast is a kind of never-ending brunch, where weekday mornings mean avocado toasts and espresso drinks and maybe even a laptop at spots like Venice’s Great White. For others, breakfast is a mix of big-meal decadence, fast service, portability, and flavors — and that’s precisely where the breakfast burrito rules.

Unlike other cities — say, New York’s morning sandwich scene, or Austin’s breakfast taco obsession — Los Angeles relies on the sturdy, stable breakfast burrito to pack a fueling weekday wallop. The competition for who makes the area’s best version is fierce, and all that oversaturation leads to conversations about what breakfast burritos even are, conceptually. Should they have potatoes or hash browns, or tater tots, or no potatoes at all? Fried eggs or soft scrambles? Are traditional American breakfast meats the best look, or are machaca and soujuk fine departures? What about salsas versus creamier sauces, and what about types of cheese — to say nothing of cheese crusts on the outside?

Why you should trust me: LA’s breakfast burritos have broken my brain, in a good way. It’s the food I think about the most, the food I would eat every day if it did not kill me (it would). I probably have more points to make about what qualifies as a good breakfast burrito than any other food in the city; the potatoes matter to me, the eggs matter to me; it all matters to me far too much. So much, in fact, that I’ve been writing semi-obsessively about breakfast burritos for years, in maps and features and news articles since my first days at Eater and beyond. I’ve eaten at dozens, maybe hundreds of breakfast burrito spots across Southern California — and I always make sure to get just the right shot for the camera.

So, what makes the Rico Suave LA’s best all-around breakfast burrito? Simple: it’s the ratios. Chef-owner Rouha Sadighi is no culinary slouch, having previously won on Cutthroat Kitchen and spent time in restaurants like New York City’s Penelope and the since-closed Venice staple Joe’s on Abbot Kinney. She knows a thing or two about finding balance in a dish, and it shows.

Any breakfast burrito that truly ascends to greatness must first deal with the potato problem, and at the Rooster Sadighi relies on tater tots for crispness, texture, and adequate starch proportions. She was among the very first places in Los Angeles to use tater tots as a breakfast vehicle, leading to a whole new generation of follow-up options that now rely on the craggy, kid-friendly potato for their own burritos. It’s easy to be on trend; it’s harder to set the trend.

Sadighi’s famous burrito also skirts the line between scrambled and too-soft, runny eggs by serving eggs that are just set at medium. The yolks are soft and forgiving and flavorful (without being burned on a griddle), and pliable enough to stay in place and not slide around. The yolk doesn’t spill dramatically, but it does meld nicely with the burrito’s dual cheeses, cheddar, and cotija.

The Rico Suave relies on bacon — not chorizo, not mushy sausage links, not shredded beef — which is the undisputed best breakfast burrito meat. Good bacon should have the right amount of salt, chew, fat, and firmness (but not too much) to add a final textural contrast beyond the tater tots. And if that all weren’t enough, Sadighi uses both a bracing salsa and a robust cilantro crema inside each Rico Sauve, taking the best of both sauce worlds and combining them inside of a flour tortilla (which, it must be said, is also lightly griddled on the outside to seal in all the goodness, and for yet more texture). Plus, there’s automatically avocado inside each one. No extra fee, no messing around. The cream, the salsa, the cheese, the bacon, the eggs, the tater tots, the avocado — it all just works, no mods or misses in the group.

The Rico Suave breakfast burrito has become so popular, so ubiquitous, that it can often be left behind by shiny newcomers on the a.m. scene. Sadighi smartly began wholesaling her burritos early on, allowing coffee shops and other vendors to sell her Rico Suave creations themselves for a fee. Every morning, in many corners of the county and beyond, diners wake up to score a Rico Suave for themselves, en route to wherever the day takes them. Los Angeles is lucky to have such breakfast greatness in its midst.