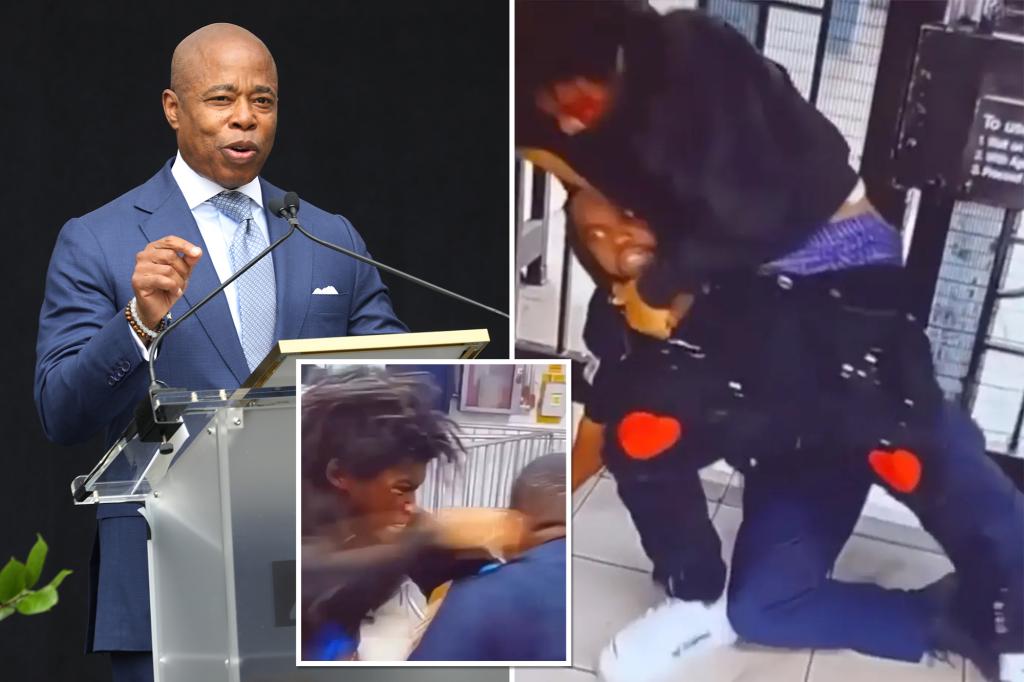 Mayor Eric Adams on Tuesday called the latest caught-on-camera attack on an NYPD cop a “clear case” for rolling back New York’s controversial bail reform law in order to crack down on violent criminals.

A video clip exclusively obtained by The Post on Monday allegedly shows a 16-year-old boy punching a cop during a confrontation in an Upper Manhattan subway station on Saturday evening.

Adams said “one aspect that was missing” from the recording was the fact that the teen was arrested for robbery on Wednesday, “just a few days ago.”

“Now he’s back, decides he’s not going to pay his fare,” Adams said during a City Hall news conference.

“The transit officer could have arrested him for not paying his fare. He didn’t do that. He told him to leave this system and, in response, we saw in the video what happened.”

Adams added: “We need to look at violent offenders and this is a clear case of that.”

“Robbery is a violent crime. But as soon as we catch them, the system releases them and they repeat the action … When I say we’re the laughingstock of the country, this is what I’m talking about.”

Sources said the teen was arrested Wednesday and charged with second-degree robbery, a felony, over a June 21 incident in which he and three others allegedly jumped a 49-year-old man.

The victim was walking on Madison Avenue and East 40th Street when the four muggers pounced, knocking him to the ground and running off with his cellphone, the sources said.

The teen was apparently released without bail in that case later Wednesday, just a few days before the subway incident in East Harlem, which also involved a teenage girl.

NYPD Commissioner Keechant Sewell said the incident was “another example of individuals emboldened by a system that, just days ago, immediately released one of them after being arrested for robbery.

“Once again, they are shown that there are no consequences for violent criminality,” Sewell tweeted.