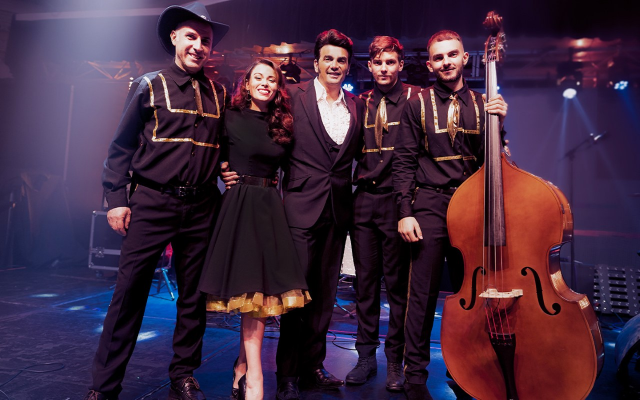 It will be a family affair at Bunjil Place on Saturday 20 August, as a real life married couple hit the stage as iconic country duo Johnny Cash and June Carter.

Mark and Joanne Caligiuri, who married in 2016, star in Get Rhythm – A Tribute to Johnny Cash & June Carter – performing crowd favourites like I Walk the Line, Folsom Prison Blues, Jackson and A Boy Named Sue.

Coinciding with the close-knit spirit of many other classic country acts, they are accompanied by Mark’s sons Chris (double bass) and Lucas (drums) and his cousin, Adam Prozzo (lead guitar).

The Caligiuris have toured Cash shows across Australia for fifteen years.

“I was actually a fan of the Carter family when I was in high school!” Joanne explained.

“I used to like old country music and I was also very familiar with Johnny Cash and I even remember the exact moment of learning of his death on TV when I was in high school.

“When the movie [Walk the Line] came out in Australia 2006 I was so excited and told Mark we had to go as I was a fan of Cash.

Joanne said it was after watching the movie together that Mark also became a fan of the music, after which they began to create their own Johnny Cash show.

“I actually already had some Cash CDs that I shared with Mark and he was hooked,” she said.

“That’s when we started to form the show and a year later we started it 2007.”

Years of touring helped shape what they wanted to express through their shows.

“We want people to get excited,” Mark said.

“[We perform] an energetic show and to . . . feel the connection with each other too as that was an important part to John and June.

“Getting everybody together and having a good time to some of the greatest country songs ever written and to take them on a Journey throughout the night.”

Outside of live performances, they are also building a sizeable online presence.

Their cover of Johnny Cash and June Carter’s “‘Cause I Love You” has racked up over 52,000 views on YouTube.

The show, which sold out when it played at Frankston Arts Centre on 30 April, will be taking place at Bunjil Place on Saturday 20 August at 8 pm.

Audiences can expect a fun-filled, high-energy show—with some audience participation. Tickets are available at the venue, by phone (9709 9700) or can be purchased online at tickets.bunjilplace.com.au/7253