> Ferry service between P.E.I. and Nova Scotia delayed until at least Wednesday Skip to content 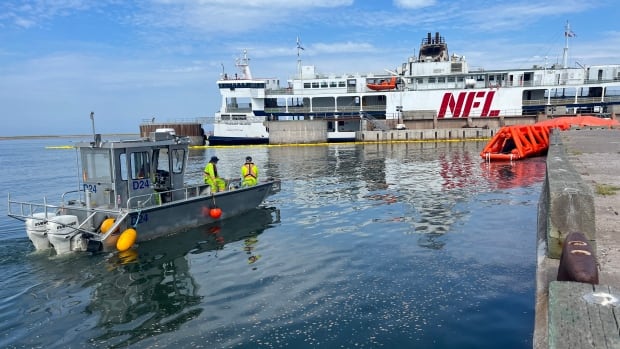 Ferry service between P.E.I. and Nova Scotia will not resume until at least Wednesday, according to officials with Northumberland Ferries Ltd.

Service has been suspended since Friday when a fire broke out on the MV Holiday Island. The boat is not expected to operate for the rest of the season.

The boat was listing Monday, and taking in some seawater.

“With the excessive heat that would’ve happened because of the fire, there’s probably piping that’s been compromised.  And that water can find its way into the ship,” said Don Cormier, vice-president of Northumberland Ferries.

Dive teams are working to repair the piping.

The other ferry, MV Confederation, can resume service once the situation with the Holiday Island is under control, Cormier said.

“We are aiming to resume service with MV Confederation on Wednesday.”

Northumberland Ferries is looking into getting another ferry to replace the Holiday Island, Cormier said. In the interim, the Confederation will make four round trips daily.

Meanwhile, Confederation Bridge officials are advising travellers there could be some delays Tuesday.

Insight Productions will be filming on the bridge from 6 a.m. to 3 p.m. The bridge will be operating with only one lane of traffic while the filming is taking place.

In a social media post, officials said that although it is always exciting when the Confederation Bridge and P.E.I. are featured on television, the shoot may cause delays to traffic.

About 80 per cent of the vehicles have been retrieved from the Holiday Island, Cormier said. There did not appear to be any visible damage. Northumberland Ferries is working to get the remaining vehicles back to its owners.

Margie Crown was relieved to be back her driver’s seat Monday.

‘The causes and factors of the accident are the main focus of the TSB, as well as … findings that could eliminate or reduce the risk,’ says Marie-Hélène Roy, manager of marine operations in Atlantic Canada for the Transportation Safety Board of Canada.

Virginia Clark Druhan said her car appears to be in good condition.

“It’s really nice to have my car back, because if I needed to get a new car, I wasn’t sure I’d be able to get a new car with the conditions out there for shopping for a vehicle.”