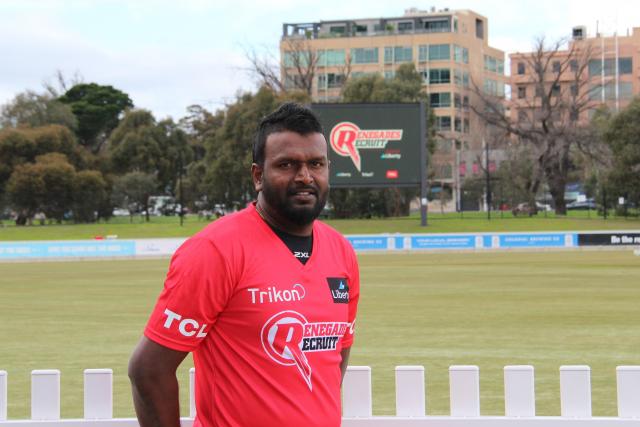 The St Albans cricketer is one of 12 local cricketers from across Victoria who are part of the television show that starts on Monday.

The cricketers will be whittled down to three before a public vote to decide the winner.

The winner will be invited to link up with the Renegades Academy squad, which will play matches in the lead up to the BBL season.

The winner will also receive prizes for themselves and their cricket club.

Janoda, who played first class cricket in Sri Lanka, said it was a good experience. He said his aim had been to make the top three.

“It’s one of the best opportunities I’ve had in Australia,” he said. “It was an excellent opportunity for me as a cricketer.

“The show was hard at times and there were some really good players.”

Janoda played in the Melbourne Renegades Champions League earlier this year and was named 12th man in the team of the competition.

The competition aims to increase the number of South Asian cricketers who progress from recreational cricket to professional cricket in Australia and to showcase the talented South Asian players and match officials living in Victoria.

He said it was that experience from the champions league that put him on the radar of the Renegades.

“I played in the champions league in India in 2011 and that’s the biggest cricket I’ve ever played,” he said.

“I was able to play in the Melbourne Renegades Champions League competition and I performed pretty well.

The show’s first episode screened on Monday and will run over three weeks.

Janoda’s focus is now on the upcoming Victorian Turf Cricket Association season with the Saints.

“I’m excited for the season ahead.”

Head coach Simon Helmot said it was a good opportunity to give local cricketers a chance to build on their careers.

“It was great spending a day with this group of players and to learn a bit about their cricket and life journeys,” he said.

“There’s no doubt we had some high-quality community cricketers involved, from various metropolitan and regional competitions.

“We had to make some really tough selection decisions – going from the starting 12, to the top six and then the final three.”