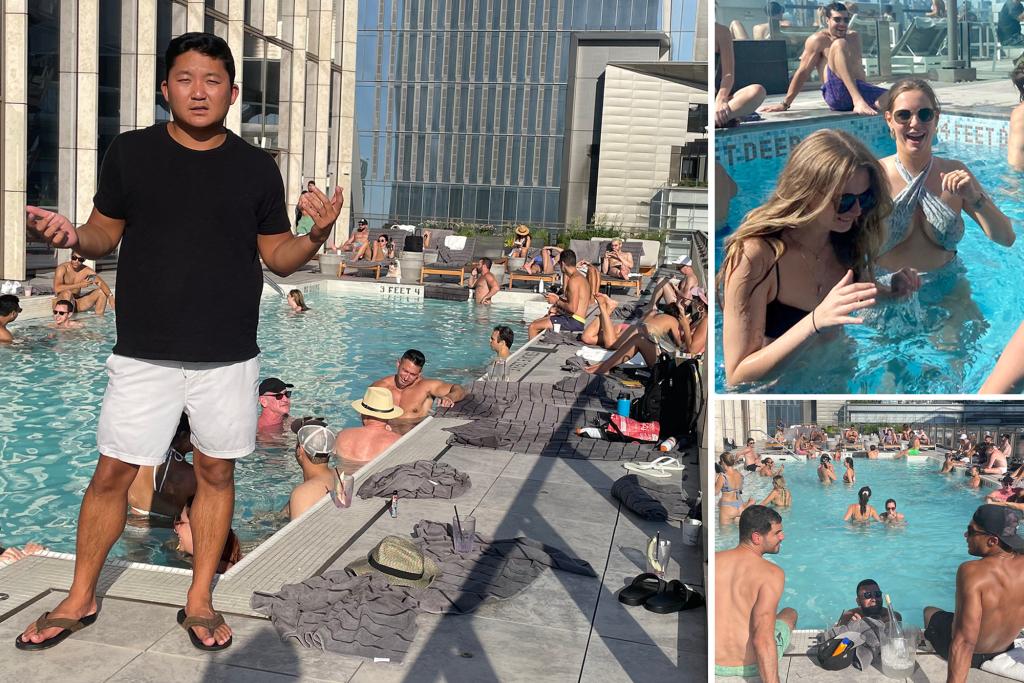 The city’s coolest pools are getting too hot to handle.

On a recent scorcher of a Saturday, the rooftop common area at One North Fourth, a luxury rental building in Williamsburg, was wall-to-wall party animals, bobbing and weaving to music so loud it threatened to puncture eardrums — or the Instagram-ready swan-shaped pool floatie bobbing about.

Kevin, 29, a resident in the building who works in real estate, had intended on having a serene pool day amid the recent heatwave, but he could barely find a chair, let alone dip a toe in the water. The deck was covered in sweaty bodies, some that didn’t seem to belong.

“It’s not just residents — it’s people who know there’s a pool and just walk up,” Kevin, who declined to give his last name, told The Post.

With temperatures rising and a spate of shark attacks making local beaches less attractive, New Yorkers are diving head first into private pools in luxe buildings this summer. But the tides aren’t calm: Overcrowding is sparking conflicts all over town as residents and interlopers looking to pool party go to war with those who want to enjoy calm waters and a pool area free of binge drinking and vomit.

“It’s a free-for-all,” griped Kevin of the pool he shells out $65-per-month to use, along with other building amenities like a yoga room. That’s on top of the $4,750 per month rent he pays for a one bedroom.

“The building is not cheap. You pay for a certain level of peace and quiet,” said Kevin, noting that he can’t even score a lounge chair on weekends before the bikini-and-bucket hat crowd descends.

At nearby 420 Kent, another luxury Williamsburg building, a trail of glass bottles from the day before littered the seventh floor outdoor terrace on a recent afternoon and another party was just getting started. Drunken behavior has become such an issue that building management recently had to send out a memo discouraging frat-house antics. An anonymous resident said they recently saw vomit in a public area, though it’s unclear if any swam into the pool.

“When people party irresponsibly and like, get too drunk and throw up. Then it gets in the way of everyone else’s fun,” the resident said, noting that they aren’t a total kill joy “I’m all for people being able to party — that’s what the pool is there for, and it’s summer.”

Even those who don’t live in a building with a pool are calling foul. Joseph Bonvouloir, 26, the founder and CEO of an asset management company, pays around $300 a month to access the sprawling pool area at Equinox Hudson Yards. So far, he’s been left cold by the crowding. “On the weekends, if I’m not there at the crack of dawn the wait time is about four hours just to get a chair,” he complained.

The wet and wild scenes are causing some prospective renters and members to cut and run, before signing any paperwork.

Last month, Dennis Shirshikov, 32, was apartment hunting on the Upper West Side.

He wanted a luxe building with a pool, but when he stepped foot inside the indoor pool area on a Thursday afternoon in one upscale West 87th Street building, he was shocked by what he saw. There was a mix of Gen Z and millennial-aged sunbathers shouting and splashing, leaving a trail of empty beer cans in their wake.

“The pool itself was unruly,” Shirshikov, a dad of three young children told The Post. “It was a frat party on a Thursday afternoon,” he said.

Shirshikov, a strategist at Awning.com, a real estate company for investors, knew he could never have his kids around the ruckus, and went on to the next listing.

Next month, he’ll move into a building near Lincoln Center, where he says things are more civilized.

“I’ll be doing laps after work, relaxing and sitting in silence,” Shirshikov said. “People stay in their own lane.”