Heatherwick Studio is taking part in this year’s Royal Academy Summer Exhibition with two retrofit projects in the United Kingdom: Broad Marsh in Nottingham and Parnham Park in Dorset. Titled “Ruins Reimagined“, the exhibition presents two different approaches to reusing existing architecture, from a Grade I-listed 16th century house to a partially demolished 1970’s shopping center, each offering a unique response in scale and heritage to the Summer Exhibition’s theme of ‘climate’. The models are on display in the Architecture Room until 21st August. This year, the Architecture Room is curated by Niall McLaughlin RA and Rana Begum RA, and will sit across two spaces, mixing art and architecture together. 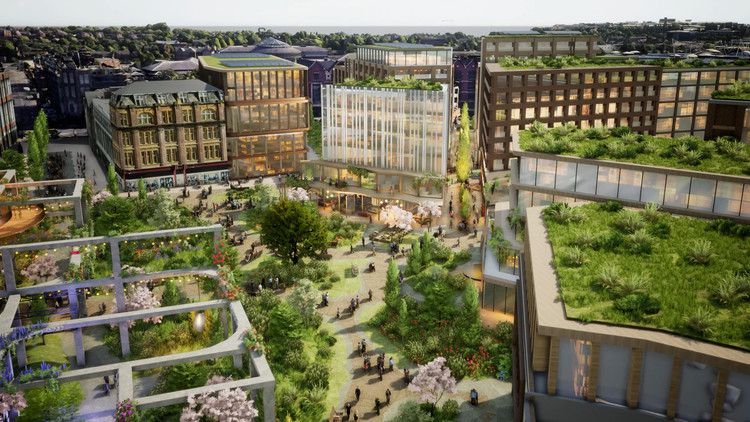 The projects come as a response to the fact that more than 50,000 buildings are demolished each year in the UK according to the Architects Journal. With that, finding ways to utilize embodied carbon instead of demolishing and rebuilding is now one of the essential contributions designers can make to help their clients and policymakers achieve net zero.

has been commissioned by businessman and entrepreneur James Perkins and his wife, Sophie, to reinvent a new future for Parnham Park estate in Beaminster, Dorset. Building on the success of Anyhoe Park, which became a leading hospitality venue, the 16th century Parnham House is now being restored as an events space. The design aims to improve its energy performance and futureproof the building, introducing new life into the heavily damaged western elevation. The models on show reveal a reimagined 9-meter Jacobean feature window for the Great Hall, designed to be opened in a variety of positions with cantilevered leaves of glass pivoting on a central point.

In parallel, the studio is currently working with the local council to revitalize a 20-acre site in Nottingham. The project includes salvaging and reusing the partially demolished shell of a 1970’s shopping mall to provide a new space for a variety of functions. The renovation is set to reduce the waste and carbon emissions from new construction, and provide space for a wide range of community uses including communal kitchens, theaters, learning spaces, and sports facilities, bridging the gap between generations, communities, and cultures in the city.

The challenge of what to do with the former Broadmarsh shopping center has been a chance to think about the failure of our city centers. They should be about bringing people together, not just about retail. Rather than demolish the structure, we are proposing to keep the frame and breathe new life into it, creating a place that can hold the diversity and vibrancy that is so lacking from many city centers. The aim is to bridge between generations, communities, and cultures so that the new Broad Marsh can reflect the true diversity of the city. – Thomas Heatherwick

In May, Google’s first ground-up campus, designed by BIG – Bjarke Ingels Group and Heatherwick Studios in collaboration with Google’s design and engineering teams, has opened in Silicon Valley. The campus’ mission is to create a human-centric design for the future of Google’s workplace and set new global sustainability standards for construction and office design, operating entirely on carbon-free energy by 2030.