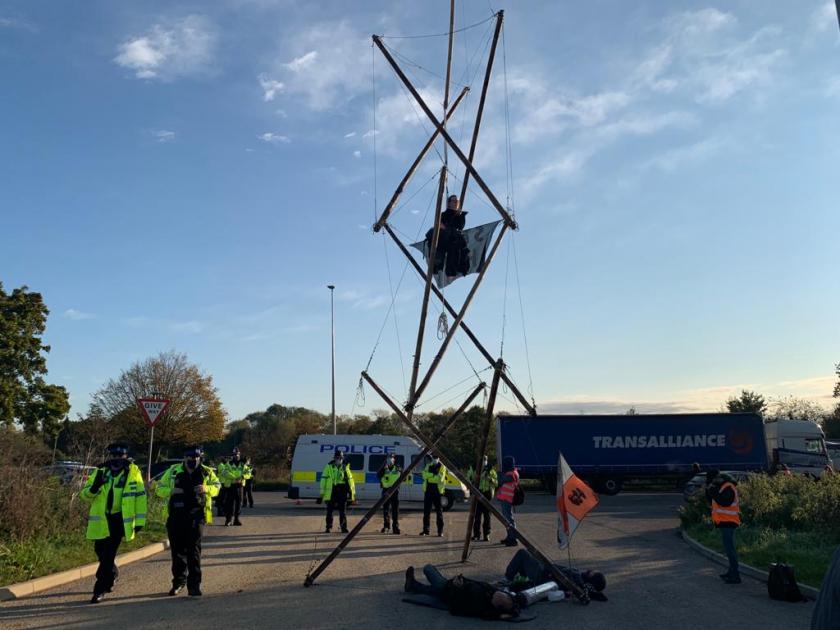 An injunction designed to block activists from carrying out “disruptive protests” on land along the entire route of the planned HS2 rail link has been granted by a High Court judge.

The line’s developers, High Speed Two Limited, backed by the Secretary of State for Transport, sought the “anticipatory” injunction to protect construction works along the first phase of the route from London to the West Midlands.

Areas of protest have included the HS2 depot in Maple Cross, at London Euston, in Wendover, Buckinghamshire, and further north.

Police officers stand guard at a protest at the HS2 site in Maple Cross in 2020. Image: Gareth Morris

Several protesters argued at a hearing in May that an injunction would obstruct “peaceful protest against illegal tree-felling and ‘wildlife crimes’”.

The order – granted by Mr Justice Julian Knowles on September 20 – prevents anyone from entering or remaining on HS2 land, deliberately obstructing or interfering with vehicles, equipment or people accessing the land, and interfering with any fence or gate at the perimeter.

It does not prevent anyone from accessing public rights of way or private rights on the land.

Read more: More bus services to be axed – but a major new service to be introduced

The judge said: “I have anxiously considered the geographical extent of the injunction along the whole of the HS2 route, and whether it should be more limited.

“I have concluded, however, given the plain evidence of the protesters’ intentions to continue to protest and disrupt without limit – ‘let’s keep f****** up HS2’s day and causing as much disruption and cost as possible. Coming to land near you’ – such an extensive injunction is appropriate.”

Environmentalists had pleaded for the court to refuse the injunction, with Victoria Lindsell telling the judge: “Every second that this work continues they are hammering another nail in the coffin of the climate crisis.

“These people and millions of others have every right to protest. This (HS2) is just a money-making project. We don’t need another rail line.”

An HS2 spokesperson said they “welcomed” the judgement, adding the line will “play a vital role in Britain’s economic recovery”.

They added: “We urge everyone who cares about our natural environment to support a project that is providing work across the UK today, and in the future will get people out of cars, off planes and on to zero-carbon rail travel.”

Have you got a story for us? You can contact us here.

To receive breaking news alerts or newsletters sign up here.

Check out our Watford crime and court Facebook page here.