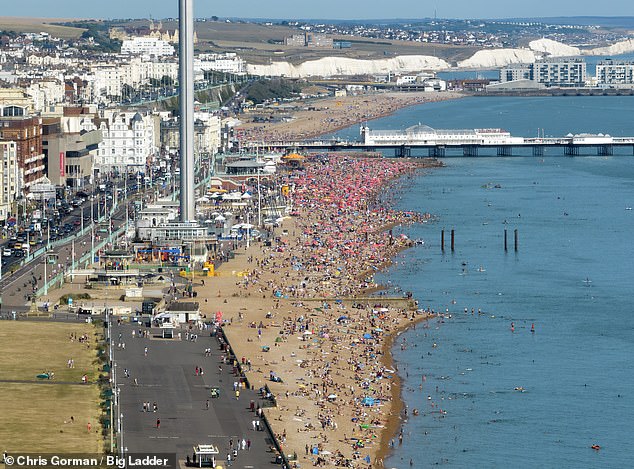 By Jamie Phillips For Mailonline

Police are searching for a gang of men ‘who followed girls and women into sea at Brighton beach before sexually assaulting them underwater’.

Lifeguards called police after receiving numerous reports that a group of men were ‘sexually assaulting and harassing women’ between 1pm and 5.30pm on Tuesday – the hottest day ever recorded in the UK.

The incidents are said to have taken place between Brighton Pier and a lifeguard hut to the east during a day in which thousands flocked to the popular beachfront.

A 32-year-old man from Hayes, London, has been arrested on suspicion of sexual assault of a female. He has been released on bail while detectives continue to investigate the incidents.

A spokesperson for Sussex Police said: ‘Detectives investigating a series of reported sexual assaults in Brighton are appealing for further victims and witnesses to come forward.

‘Around 6pm on Tuesday, police received a third-party report of a group of men sexually assaulting and harassing women and girls on the beach. 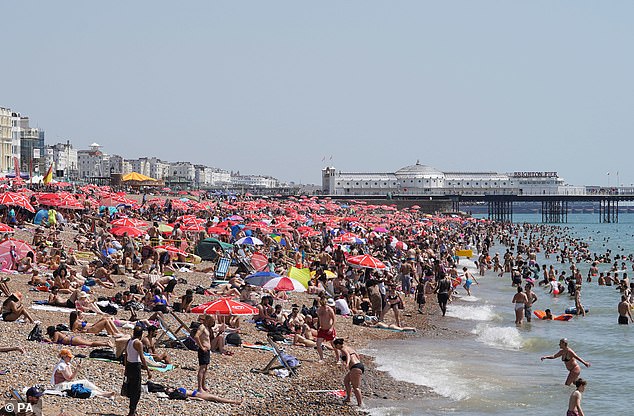 The alleged incidents took place between Brighton Pier (pictured) and a lifeguard hut to the east, police have said

‘Officers attended and were informed of multiple reports made to lifeguards involving the same group. This included following and touching girls in the water.’

Investigator Mark Taylor added: ‘These are concerning reports and we are urging anyone who was a victim to sexual, inappropriate or offensive behaviour on Brighton beach that day to come forward so we can establish the full circumstances of what happened.

‘The area was very busy at that time and so we believe a number of people will have witnessed this behaviour.

‘If you have any information at all, no matter how small, please get in touch with us.

‘We take reports of sexual assaults incredibly seriously and encourage people to report any incidents to us at the soonest possible opportunity, so we can identify any offenders but also support and safeguard any victims.’

The incident took place as the UK experienced its hottest day on record with temperatures soaring past 40C (104F), sending sunbathers flocking to the coast to soak up the rays and cool off in the sea.