> Is Roti the Next Sliced Bread? The Owner of Ultimo Cafe Roti Rebel by Kafe Kooks Hopes So Skip to content 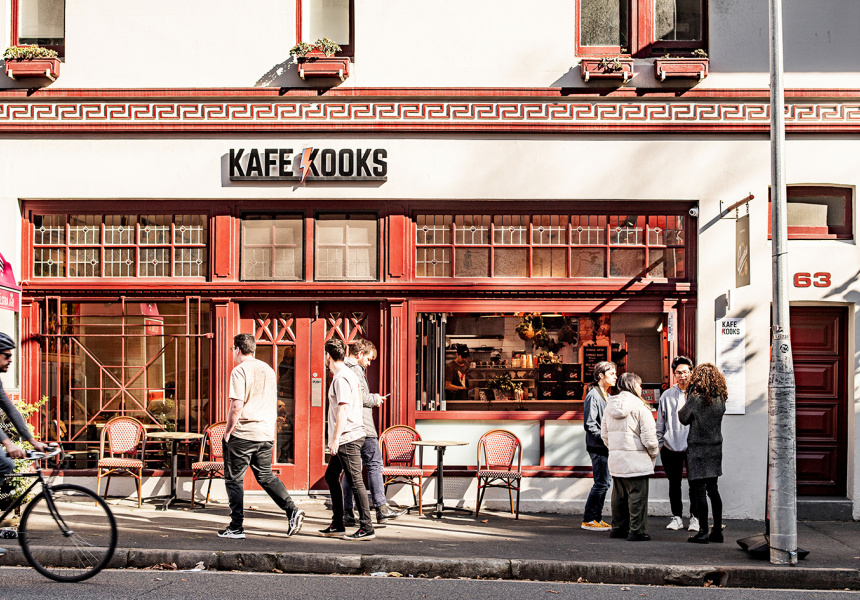 Roti is an indisputable staple of South Asian cuisines. For centuries, supple flatbread dough has been gracefully rolled and tossed before it puffs and speckles with char upon grilling, turning golden brown and sending its buttery aroma through the air in busy streets and restaurants. Eaten for breakfast, as a snack, or as an accompaniment to mains, sweet or savoury, roti can do no wrong.

Andrew Ray (ex-general manager for David Thompson’s Long Chim) is behind the operation. Inspired by his travels around Indonesia and Thailand, he wants to centre the beloved flaky flatbread. “I really think roti is the next burger bun or the next sliced bread,” Ray tells Broadsheet. And it shows in the menu, where roti is the star.

While roti recipes vary from country to country, Kafe Kooks’s roti master Suresh Rajandran favours a Malaysian style, and uses flour and condensed milk as the dough, leaving it to set with margarine and then cooking it in ghee.

The daytime menu, served until 4pm, includes breakfast roti paratha wraps with fried eggs and a choice of fillings. Or go for roti sarang burung, which means “bird’s nest roti”, a traditional Malaysian street food dish in which a fried egg is encased in a roti ring and served with sambal. There are also twists on the classics like eggs Benedict and smashed avo on discs of roti instead of sourdough toast or English muffins.

The influence of Ray’s travels to Thailand – where dessert roti is a common street food – is reflected in sweeter variations like fresh roti with banana and condensed milk, or apple crumble filling.

For drinks there are Strangelove sodas and Simon Says juices, as well as coffee by Genovese. Takeaways are served through a wide window out front. An indulgent iced coconut coffee is worth trying – topped with toasted coconut flakes, the sweet milk nicely balances out the acidity and bitterness of the coffee.

On Thursday to Saturday evenings there’s a menu of curries, including beef rendang and vegetable dal, plus snacks, as well as a pared-back bar offering a few spirits, Dainton Brewery beers and a couple of Aussie wines. It will become a convenient pre-performance option for anyone visiting the Kings Cross Theatre, opening soon on Broadway.

You may notice the cafe is a subtle homage to the late David Bowie. Ray says he always had a dream he’d meet the legendary artist in Bali. It never came to be, but the cafe’s design was a way for him to connect to Bowie. “When he died, I was [horrified], and I was at work and crying my eyes out.”

Roti Rebel takes its name from the Bowie song Rebel Rebel, while “Kooks” is a nod to the 1971 song of the same name from the famous Hunky Dory album. Kafe is the Indonesian word for coffee.

The space is decorated with colourful cushions and stacks of books with Bowie’s face, while a whole-wall collage by artist Greg Paton depicts a colourful array of plants and animal cut-outs inspired by the track Moss Garden from Bowie’s 1977 album Heroes. Other elements, such as plants growing out of an old phone box and cat-shaped porcelain vases, complete the look.

“I’m not trying to be a Bowie cafe, [but] when you hear the song [Kooks] it’s … about being kooky and different and that’s what we are,” says Ray.