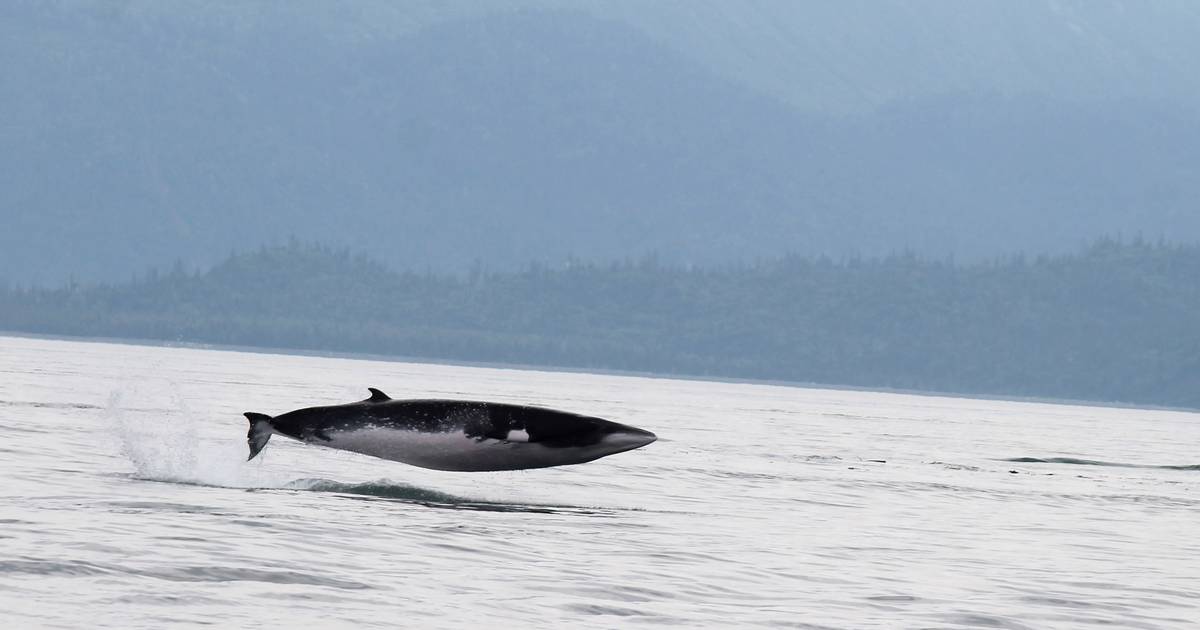 Brian Herbst had a banner Alaska vacation. He caught rockfish and halibut, saw moose and bears, stayed in a yurt — and in a moment of perfect timing, managed to snap a photo of a minke whale mid-breach, suspended above the waters of Kachemak Bay.

The snapshot shows the whale parallel above the water almost as if it’s competing in belly-flop contest, doing a midair plank or floating across the bay like a hovercraft.

On July 12, Herbst was on the Danny J Ferry heading to lunch at The Saltry Restaurant in Halibut Cove when the captain announced that a whale was off in the distance. Using his daughter’s high school yearbook camera and a borrowed lens, he started snapping photos.

As the boat turned, the whale began swimming toward him.

“I was like front row on this, and I was like, ‘I’m gonna get this thing, chah chah chah chah,’ ” Herbst said, reenacting the moment during a video interview from his North Carolina home on Thursday morning.

[A killer whale was headed toward a sea otter in Kachemak Bay. Then the otter hopped on a boat — and stayed there.]

Afterward, Herbst sent the photo to The Saltry, which posted the image to its social media page. From there, the photo began to circulate online, garnering thousands of likes with captions like “L E V I T A T E” and “minke whale goes vroom.”

A minke whale breaching is rarely captured on camera, said Marc Webber, a marine mammal research scientist and instructor at the Kachemak Bay campus of the University of Alaska Anchorage.

He said it’s a “remarkable photograph.”

In the photo, the whale’s sharp dorsal fin can be seen on top of its body as well as a white band on its flipper — a defining characteristic of minke whales, according to Webber. While the whale is parallel to the water, it’s actually tilted slightly away, showing off its light underbelly.

It’s not known why the whales breach, powering up out of the water and flying into the air, Webber said. It could be a way to signal to other whales by making a loud reentry into the water, or “some heightened state of excitement or demonstration of exuberance,” he said — but that’s just speculation.

Webber has even received reports of minke whales in which people said they’d seen a large dolphin, not knowing it was a minke and unable to gauge its size. Herbst initially thought the whale he saw was a dolphin, based on what he’d seen in North Carolina.

Minke whales are shy most of the time, ignoring and avoiding boats, so they aren’t often glimpsed by people.

[A creeping mass of insect larvae near a Denali lodge raises the question: ‘Am I hallucinating?’]

The minke whale is the smallest baleen whale in Alaska waters. They weigh up to 20,000 pounds and typically measure 25 to 30 feet long as adults, far smaller than their gargantuan counterparts, like humpback, blue and gray whales.

And they’re fast, Webber said. Minke whales eat by making high-speed rushes to groups of smaller fish like herring and anchovies, gulping large mouthfuls. They then strain the water out through their baleen, a fingernail-like structure that hangs down in pieces and acts like a sieve, he said.

Back in Kachemak Bay, the minke whale’s breach was followed by a lunch of halibut tacos for Herbst and his family, who were in Alaska for his mother’s 85th birthday. They made it to Homer right as the weather began to turn windy and cold.

“We just hit it so perfect,” he said. “It was just made to happen.”