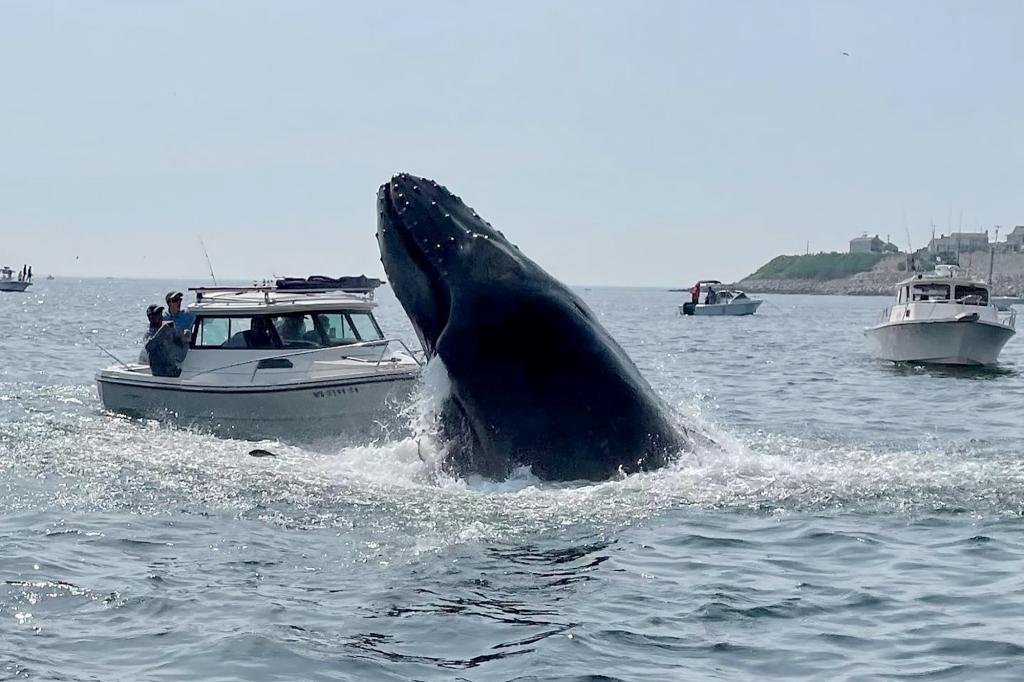 It was not a whale-come experience!

A humpback whale caused quite a splash Sunday by landing on a boat near the coast of Plymouth, Massachusetts.

Footage shows the aquatic creature jumping out of the water and landing on a 19-foot boat around 10 a.m. near White Horse Beach, NBC10 reported.

“All of a sudden, full breach, 10 feet out of the water, slams on top of this guy’s boat, like his bow goes down, basically, into the water, engine out, full thing pops off, whale rolls over the side of it, totally fine, but his boat was messed up,” witness Ryder Parkhurst told the outlet.

“It was insane, the guy was just in the wrong place at the wrong time, that’s all. Pops up, bang … right on the bow of the guy’s boat.”

Plymouth Harbormaster Chad Hunter said no one was injured by the whale.

“This could have been much worse for all involved,” added Hunter.

“Children like to lean over the side of the boat to watch the fish so it is very lucky that nobody got hurt here. An incident like this is pretty rare but very dangerous to boaters.”

Harbor officials had been monitoring whale activity in the area since Friday after a boat accidentally hit a whale.

“They’ve been out there for the last three days continuously so there’s a lot of whales, but they’re also attracting a lot of boaters, which creates a problem obviously after today,” said boater Chris Grant.

“They’re beautiful creatures but you know, you gotta keep their distance, they are still animals, you know?”

Officials have stated that with an increase of bait fish, more whales have been attracted to the coastline. Boaters have also been reminded that under the Marine Mammal Protection Act, they are required to stay a minimum of 100 feet away from the mammals.

Plymouth Harbor officials have said that as of now, there is no obvious breach of the act.