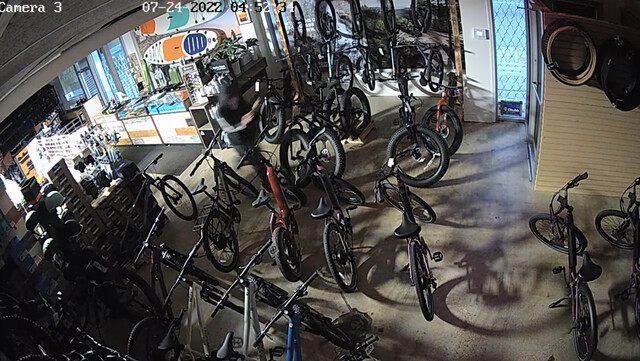 The owner of Mountain Lifestyle Outlet in Rutland says he is both frustrated and disheartened after a break and enter at the store early Sunday morning that resulted in $40,000 of damage to equipment and bikes.

He says this is the third time his shop has been broken into this year.

Clarke says an individual came in through a window.

“They threw all of the bikes off of a rack, went through the store. That bike was actually chained up in the store so they went back and got some cable cutters to cut the lock and grabbed the bike. They tried to get out of the store a few different ways. They then realized they had to go back through the hole and then when they were almost back to the window the police showed up and scared them away.”

Clarke says no arrests were made and the Kelowna RCMP are currently investigating.

“The amount of damage is a pretty big kick in the pants. I don’t know whether it is the area of town we are in because we are on a major road that we have issues with. What I learned after the last break-in is that the bicycle theft industry is humongous in Kelowna,” Clarke added.