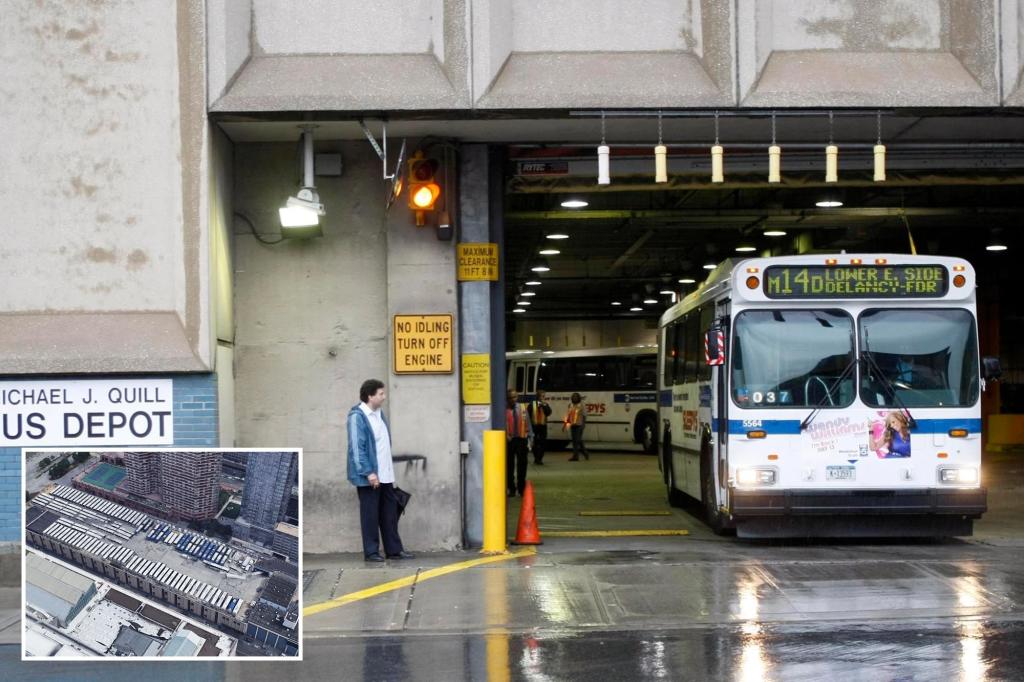 The roof of the city’s largest bus depot is at risk of collapsing and must close for months in order to make repairs — creating a potential traffic nightmare.

Renovations at the Michael J. Quill Depot on Manhattan’s West Side are expected to begin next year, The Post has learned, as the MTA scrambles to find space to store the 120 buses currently parked there, it was revealed on Tuesday.

The repair work is two years delayed despite being flagged by the state Department of Labor earlier this year as potentially compromised, according to internal documents obtained by The Post.

“The Department of Buses was supposed to have addressed the conditions of the roof over [one-and-a-half] years ago and… nothing has been done or addressed,” DOL inspector Kwo Lam informed bus officials in March.

Lam warned that a “large amount of cracks” are “spreading” across the roof, and water continues to leak onto the floor below.

“It is not a matter of time but when can a cave-in hazard occur,” his email said.

A subsequent analysis conducted by an MTA staff engineer concluded that the structure is currently not in danger of collapse, but said “water intrusion” had caused cracks in the rooftop’s foundation that “eventually… will affect the [integrity] of the system.”

“The short term fix has been to fill cracks,” according to a summary of the engineer’s findings. “If the damage is left unattended, the problem can carry further to the post tension strand/cables and compromise the structure.”

The roof of the depot holds up to 120 buses at any given time. MTA officials are struggling to find space to make up for the lost storage capacity during the repair work, sources said.

Officials are considering streets and lots as far away as Harlem, internal documents show – including nearby Javits Center, curbside spots on 40th and 41st streets, the Sanitation Department’s garage at 57th Street and surface lots at 30th Street and 126th Street.

An MTA official confirmed the depot will undergo “partial closures” of undetermined length over the course of the 12-month project, but insisted that the roof is structurally sound.

MTA Spokesperson Joana Flores said that “MTA Professional Engineers evaluated the roof and determined it to be structurally in a state of good repair, recommending repairs to maintain it in safe condition.”

The transit authority is working with the city Department of Transportation to find storage space and study possible traffic impacts on the neighborhood, the official said.

“The project will take about one year to complete and will be done in phases to minimize disruption to the depot and the public,” they said. “The roof will not be closed for the entire year.”

Internal MTA documents indicate the closure could last anywhere from three weeks to four months — the prospect of which sends chills down the spines of local leaders.

The Quill depot sits across West 41st Street from two luxury apartment towers — whose residents can now expect “noise” and “dust” as a result of the year-long renovation, sources said.

Community Board 4 Transportation Chair Christine Berthet said the area has been “overwhelmed with buses for a long time,” and questioned the value of the MTA seeking locations for bus storage without consulting the community.

“You can’t put 100 buses on the streets without impacting the neighborhood,” Berthet said.

“It’s going to be important that the MTA engage with us as soon as possible. Obviously, MTA doesn’t work like that most of the time, but I’m sure they are capable of doing it.”

A state Department of Labor rep said the agency does not comment or confirm ongoing investigations.