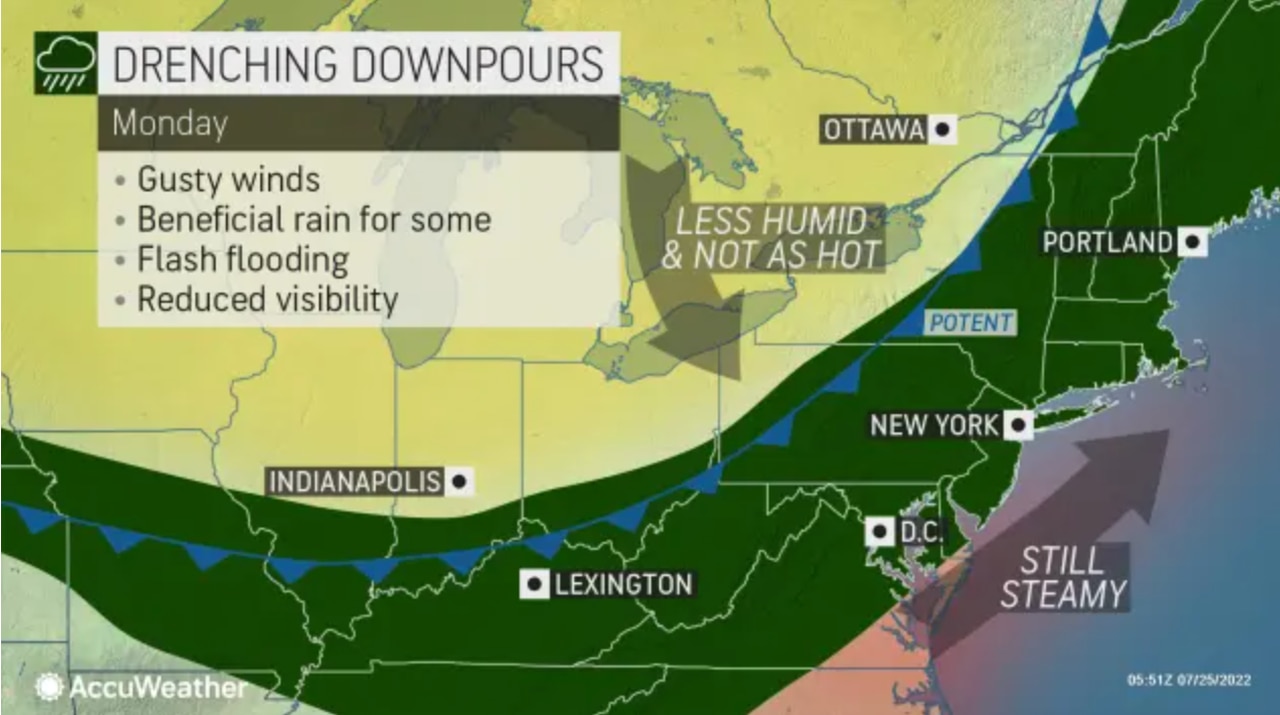 The final day of a more than week-long heat wave across most of New Jersey is expected to bring potentially severe thunderstorms and gusty winds to the state Monday afternoon and evening, forecasters say.

Storms could fire up as early as noon in northwestern New Jersey before working their way southeast and hitting southern Shore counties after 6 p.m, the National Weather Service said Monday.

Interior portions of the state are likely to be see rain starting sometime between 3 and 6 p.m.

While the rain will bring “significant relief,” from the eight-day heat wave, forecasters caution that local flooding is possible and that some of the storms could be severe.

Ahead of the storms, we’ll have one more day of extreme heat with temperatures climbing into the low 90s and the heat index reaching as high as 101 in parts of South Jersey.

The heat wave has likely already ended in northwestern New Jersey where forecasted highs on Monday will top out in the mid to upper 80s. Morris, Sussex, Warren, western Passaic and western Bergen counties are no longer under a heat advisory.

The hottest temperatures and heat indices Monday will generally be in Burlington, Camden, Mercer and northwestern Burlington, where an excessive heat warning is in effect until 6 p.m.

Once the storms move out, temperatures will drop — overnight lows will range from the low 60s in Sussex County to the upper 60s to low 70s in the rest of New Jersey.

Temps on Tuesday return to closer to normal for later July with highs in the upper 80s. There’s a chance of showers and thunderstorms in South Jersey, but most of the state should stay dry, the weather service said.

Sunday brought record-breaking heat to Newark as the temperature reached at least 100 for the fifth straight day. The high of 102 broke the previous record of 99 established in 2010.

A handful of other locations in New Jersey also reached 100 or higher, according to the state climatologist’s office, including Hillsborough and Berkeley, where highs reached 102.

Our journalism needs your support. Please subscribe today to NJ.com.

Jeff Goldman may be reached at jeff_goldman@njadvancemedia.com.