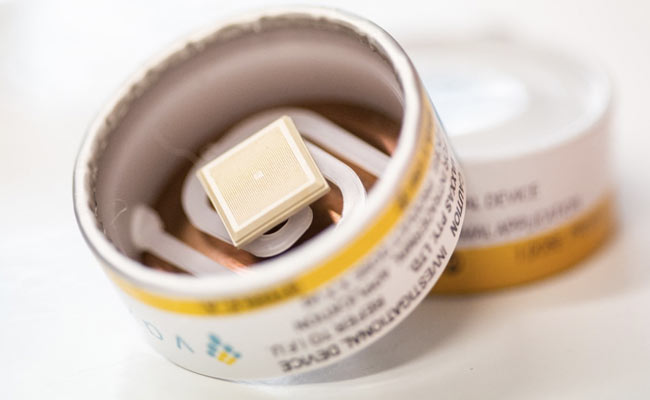 Patches measuring one square centimeter were dotted with over 5,000 microscopic spikes.

Effective vaccines without a needle: Since the start of the Covid pandemic, researchers have doubled efforts to create patches that deliver life-saving medicines painlessly to the skin, a development that could revolutionize medicine.

The technique can help save children’s tears from doctors and help people who have a phobia of syringes.

In addition, skin patches can help with distribution efforts because they have no requirements for the cold chain – and may even increase the effectiveness of the vaccine.

A new museum survey in the area, published in the journal Science Advances, showed promising results.

The Australian-American team used patches measuring a square centimeter dotted with more than 5,000 microscopic spikes, “so small you can’t actually see them,” David Muller, a virologist at the University of Queensland and co-author of the paper, told AFP.

These tips have been coated with an experimental vaccine and the patch is clicked on with an applicator resembling a hockey puck. “It’s like you get a good flick on the skin,” Muller said.

The researchers used a so-called “subunit” vaccine that reproduces the tips that dot the surface of the coronavirus.

Mice were injected either via the patch within two minutes or with a syringe.

The immune system of those who received the patch produced high levels of neutralizing antibodies after two doses, including in their lungs, essential for stopping Covid, and the patches performed better than syringes.

The researchers also found that a subgroup of mice that received only one dose of vaccine containing an additional substance called an adjuvant used to stimulate the immune response “did not get sick at all,” Muller said.

What makes them more effective?

Vaccines are usually injected into our muscles, but muscle tissue does not contain as many immune cells as are needed to respond to the drug, Muller explained.

In addition, the tiny spikes cause localized skin death, which warns the body of a problem and triggers a major immune response.

For the scientist, the logistical advantages could not be clearer.

First, when dry coated on a patch, the vaccine is stable for at least 30 days at 25 degrees Celsius (77 degrees Fahrenheit) and one week at 40 C (104F), compared to a few hours at room temperature for Moderna and Pfizer vaccines. .

This is a great advantage, especially for developing countries.

Burak Ozdoganlar, Professor of Engineering at Carnegie Mellon University in the US city of Pittsburgh, has also been working on the technology since 2007.

He sees another benefit: “Smaller amount of vaccine delivered precisely to the skin can activate an immune response similar to intramuscular injection,” he told AFP. This is an important factor as developing countries are struggling to get enough Covid vaccine.

Ozdoganlar can produce around 300-400 patches a day in its laboratory, but has not been able to test them on mRNA vaccines that have come to the fore during the pandemic because it has not been approved by Pfizer or Moderna.

The patch used in the study, which was published last Friday, is made by the Australian company Vaxxas, which is at the forefront. Human trials are scheduled for April.

Two other US companies are also in the race: Micron Biomedical and Vaxess.

The latter, founded in 2013 and based in Massachusetts, is working on a slightly different type of patch, with microneedles that dissolve in the skin.

They say that this approach has the advantage of requiring fewer peaks per. plasters – only 121 – made of a protein polymer that is biocompatible.

“We are working on a seasonal Covid and influenza combination product that will be shipped directly to patients’ homes for self-administration,” CEO Michael Schrader told AFP.

The Covid vaccine they use is produced by the company Medigen, which is already approved in Taiwan.

Vaxess has just opened a factory near Boston with support from the US National Institutes of Health. They aim to produce enough patches to vaccinate 2,000 to 3,000 people in clinical trials to be launched next summer.

The biggest challenge right now is production, where no manufacturers are yet able to make enough patches galore.

“If you want to launch a vaccine, you have to produce hundreds of millions,” Schrader said. “We do not have that scale today – no one really has that scale.”

But the pandemic has given a boost to the budding industry, which is now attracting more investors, he added.

“This is the future, in my opinion it is inevitable,” Schrader said. “I think you’ll see over the next 10 years that this (will) quite dramatically reshape the way we get vaccines around the world.”

(With the exception of the headline, this story has not been edited by NDTV staff and is published from a syndicated feed.)