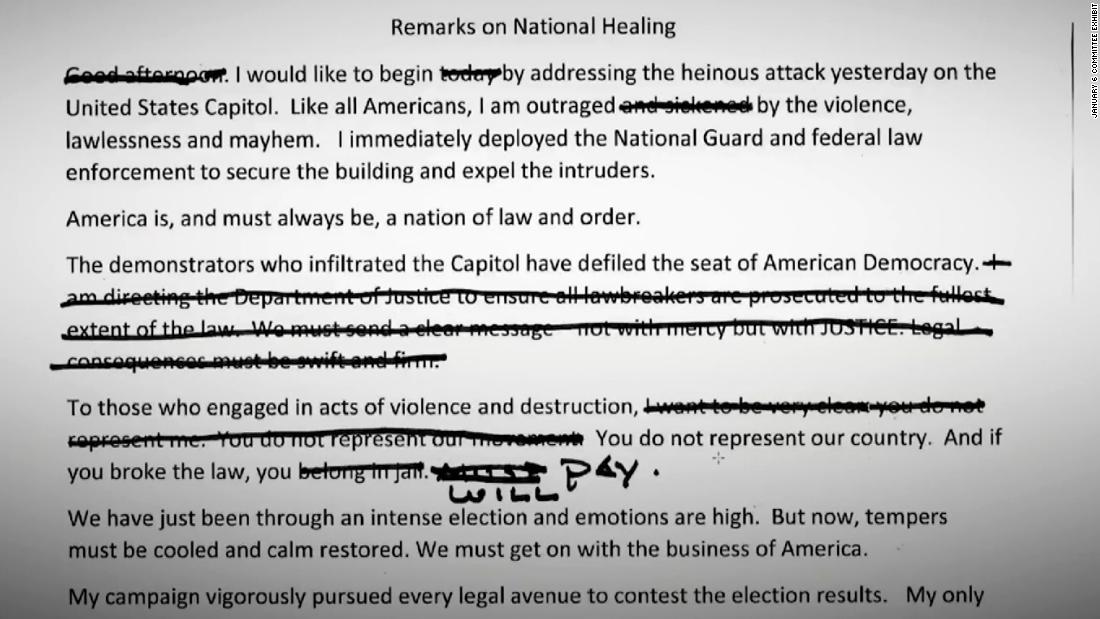 Democratic Rep. Elaine Luria of Virginia released the new video Monday on Twitter. The video includes clips of interviews with Trump’s son-in-law Jared Kushner and others stating that they believed Trump needed to make a statement on January 7.

“We felt like it was important to further call for de-escalation,” said Kushner, who helped write the draft of the January 7 speech.

The video shows the draft with lines crossed out. Trump’s daughter Ivanka, in an interview with the committee, identified handwriting on the document as her father’s. On the draft, a line that said those who broke the law “belong in jail” was crossed out and someone wrote by hand “will pay.”

According to the committee, other lines that were crossed out read: “I am directing the Department of Justice to ensure all lawbreakers are prosecuted to the fullest extent of the law. We must send a clear message not with mercy but with JUSTICE. Legal consequences must be swift and firm.”

The other line crossed out referred to the rioters who stormed the Capitol: “I want it to be very clear you do not represent me.”

When asked about why Trump wanted the lines crossed out, Kushner said: “I don’t know.”

Trump’s former White House Counsel Pat Cipollone told the committee: “In my view, he needed to express very clearly that the people who committed violent acts, went into the Capitol, did what they did, should be prosecuted and should be arrested.”

Trump’s former director of the presidential personnel office, John McEntee, testified to the committee that Kushner had told him to help “nudge this along” if Trump asked about the January 7 speech.

“He knew since I’m always with him that, ‘Hey, if he asks your opinion, you know, try to nudge this along. This will help cool everything down,'” McEntee said.

McEntee said he understood Trump to be reluctant to give the speech because of “the fact that somebody has to tell me to nudge it along.”

Former Trump White House aide Cassidy Hutchinson said she understood that the people around Trump believed he needed to make a statement on January 7, 2021, in order to quell talk of the 25th Amendment from being invoked.

“From what I understood at the time, and for what the reports were coming in, there was a large concern of 25th Amendment potentially being invoked, and there were concerns about what would happen in the Senate if the 25th was invoked.” Hutchinson testified to the committee.

In addition to those feeling that Trump needed to do more to condemn the violence that occurred on January 6, Hutchinson said that some people in the White House were worried about what would happen to Trump in the final 15 days of his presidency if he didn’t make a statement, and therefore needed this speech “as cover.”