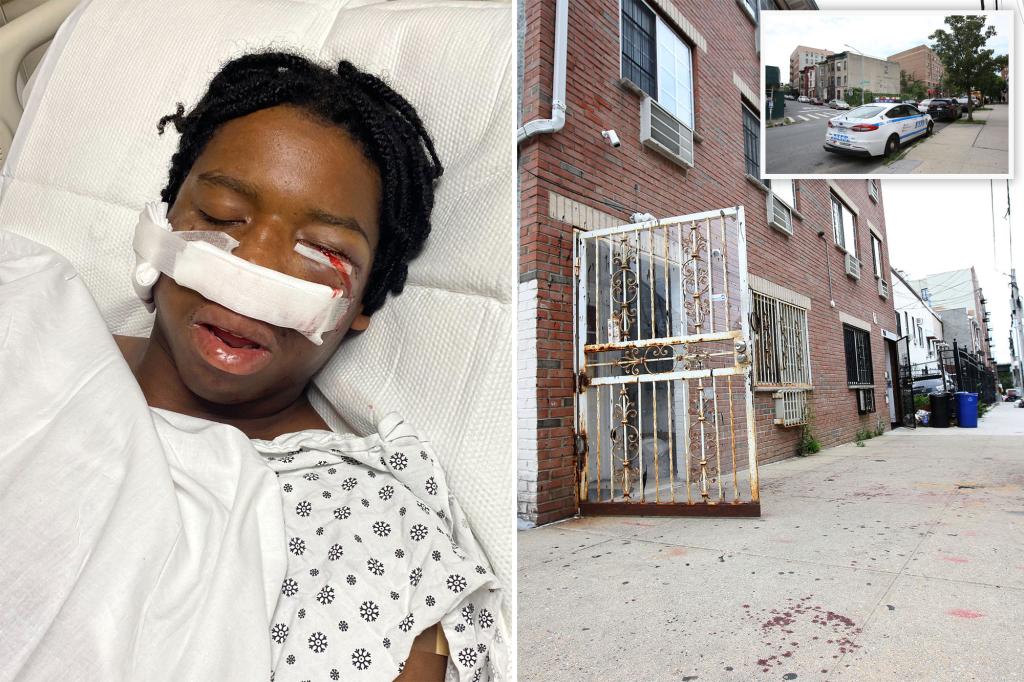 A 16-year-old boy shot along with a 12-year-old girl in The Bronx told The Post on Tuesday how the bullet lodged in his head — and their kin and pals blasted city officials over the Big Apple’s spiraling crime crisis.

“I only heard one shot, and my chin started hurting, and I started bleeding from my mouth and my nose. … I was bleeding a lot,” said teen Denzel Gamboa from his bed at Harlem Hospital.

Gamboa said he was hanging out on Rev. James A. Polite Boulevard near East 163rd Street in Woodstock around 11:30 p.m. Monday near the girl when both were shot by someone who rolled up in a car.

Cops have yet to reveal a motive for the shooting that injured the kids, whose families said didn’t know each other.

“The mayor and the police commissioner, they need to do better,” said Emely Victoriano, adding that her 12-year-old daughter was with her best friend for a sleepover when the girl was struck in the arm and side by gunfire as the pair walked along the street.

“They need to get these kids with guns off the streets,” the mom said.

“[My daughter] said they were just walking home, and a black car pulled up, and two guys were asking if they were from around here, and when my daughter and her best friend looked at each other confused, they pulled out a gun and started shooting,” Victoriano said.

“She’s stable, she’s fine. She’s going to be OK,” she said of her daughter, who is recovering at Harlem Hospital. “She’s going to make a full recovery, they told me she got hit in the left arm and in her side and it wasn’t straight in, it was like a graze.”

Victoriano recalled how “brave” her daughter was after getting shot on a particularly violent summer night, which saw a total of seven shooting victims across the city in the span of an hour.

“She just kept trying to calm me down,” Victoriano said.

Denzel said the bullet that hit him traveled through his chin and up to his eye socket, where it’s now lodged.

“When I got shot, we were just talking standing in front of the high school. It all happened really quick,” said Gamboa, who’ll undergo surgery on Thursday to remove the bullet.

Gamboa said he began screaming, “Help! Help!” and then ran to the nearby house of a friend, who called 911.

The pal told The Post, “I was just inside when I heard the shots.

“I ran downstairs and asked my mother for a towel. I was using it to stop his bleeding. You can see he was bleeding all over the place.

“I wrapped him and waited with him for the ambulance. The ambulance came fast. He wasn’t doing anything. … He was just chilling.”

Ashley Guity, the mother of one of Gamboa’s best friends, said the NYPD should bring back its controversial “stop and frisk” policy to tamp down on gun violence.

“They got to bring back that friskin! Y’all have to stop these kids. Check them, I don’t care who they are, check them!” said Guity, 32.

“They should do that. That should be the main thing.

“That’s it for my son! When the sun goes down, he’s inside! No more going out.”