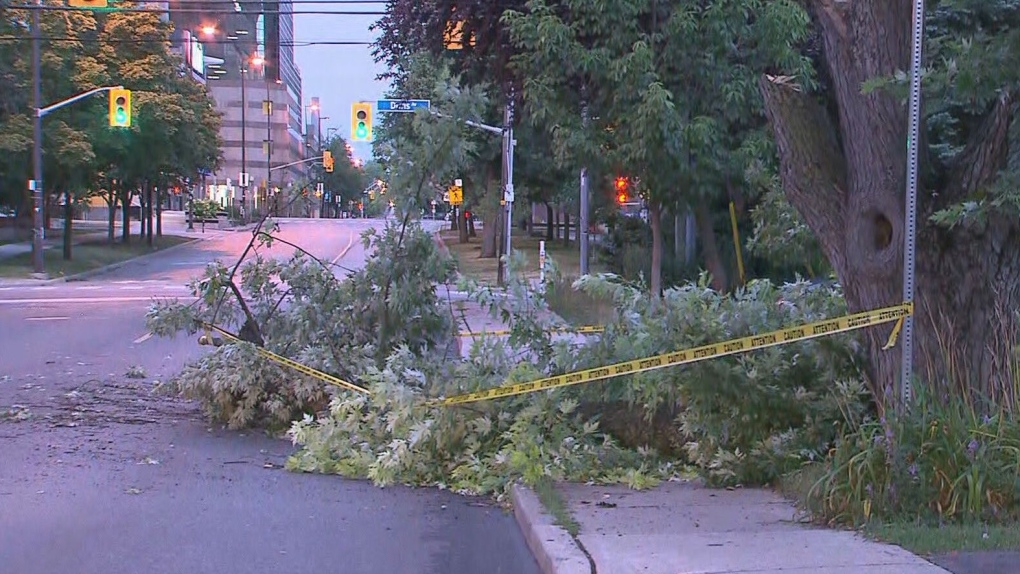 The clean up is now underway following series of strong thunderstorms that struck much of southern Ontario late Sunday evening knocking down trees and power lines.

Hydro One said the severe weather, at one point, saw more than 26,000 customers left in the dark.

At this time, Toronto Hydro is reporting one outage of note affecting up to 500 customers in Scarborough’s South Cedarbrae area, north of Eglinton Avenue East and east of Bellamy Road North.

There are also a few minor localized outages in the city affecting up to 100 customers.

There are also some mostly smaller outages in communities across southern Ontario.

Sunday night’s thunderstorm knocked down this tree at the intersection of Doris and Empress avenues in North York.

Havelock, Marmora, Madoc and Tweed, which are all east of Peterborough and north of Belleville, were hit hard by the severe weather. A few thousand people in those areas are still without power.

On Sunday night, Environment Canada issued a severe thunderstorm warning for Toronto and much of the Greater Toronto Area. The national weather agency said the GTA could see between 50 and 75 millimetres of rainfall and wind gusts of up to 70 km/h.

All alerts ended for the GTA shortly before 11 p.m.

The strong storms, which included bursts of lightening and intense rainfall at times, followed days of intense heat and humidity across southern Ontario.

Today’s weather is calling for pleasant, breezy conditions throughout the GTHA with mostly sunny skies.

-with files from Joshua Freeman