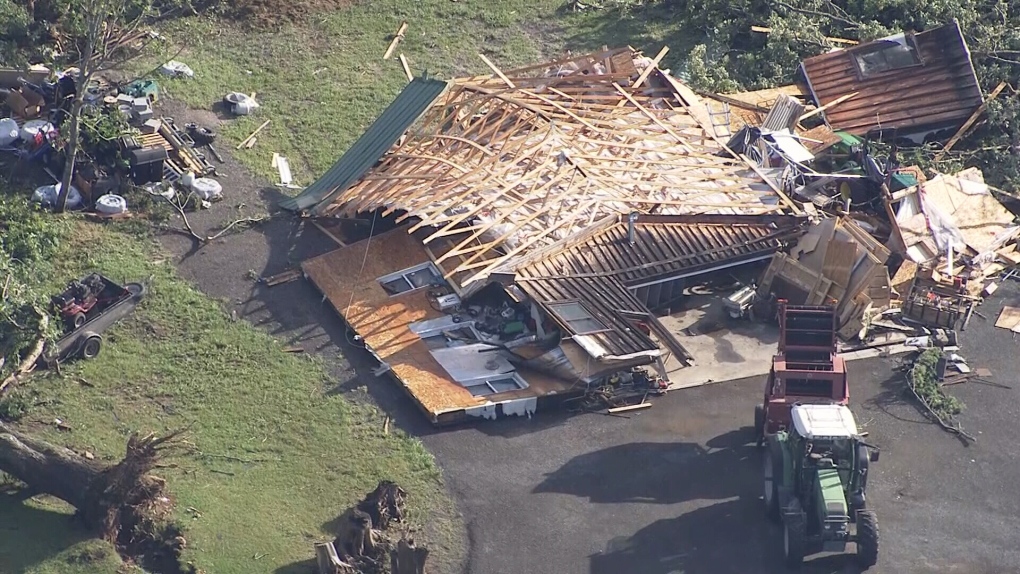 An investigation is now underway to determine whether a tornado may have touched down east of Peterborough on Sunday night.

Environment Canada says that two of its crews as well as two crews from Western University’s Northern Tornadoes Project will be surveying an area spanning from Malmora in the west to Brockville in the east today as they work to determine whether an “extensive area of damage” could have been caused by a tornado.

“It is quite possible we could have had one or two tornadoes, maybe more, this was a particularly long lived rotating thunderstorm that we call a super cell thunderstorm and when you look at the map and the length of time this was a rotating storm, the total distance is an incredible 140 to 150 kilometres from initial reports in the Madoc and Tweed areas all the way to areas northwest of Brockville,” Meteorologist Geoff Coulson told CP24. “It is quite an extensive area of potential damage for the surveyors to look at.”

Storm damage around the town of Actinolite is seen from the CTV News Toronto helicopter.

Coulson said that Sunday night’s active weather began at around 7:45 p.m. and lasted until 9 p.m.

Environment Canada says that there were widespread reports of damage following the storms, including reports of a flipped trailer in Rockdale, downed trees and hydro wires in Tweed and Madoc and numerous homes damaged in Marmora.

In the wake of the damage, the municipality of Tweed has formally declared a state of emergency.

“We are looking at a very long track of damage and that is why we think four teams is going to be needed to get a true sense of how significant this particular event was,” Coulson said.

Hydro One said the severe weather, at one point, saw more than 26,000 customers left in the dark.

At this time, Toronto Hydro is reporting one outage of note affecting up to 500 customers in Scarborough’s South Cedarbrae area, north of Eglinton Avenue East and east of Bellamy Road North.

There are also a few minor localized outages in the city affecting up to 100 customers.

There are also some mostly smaller outages in communities across southern Ontario.

Havelock, Marmora, Madoc and Tweed, which are all east of Peterborough and north of Belleville, were hit hard by the severe weather. A few thousand people in those areas are still without power.

On Sunday night, Environment Canada issued a severe thunderstorm warning for Toronto and much of the Greater Toronto Area. The national weather agency said the GTA could see between 50 and 75 millimetres of rainfall and wind gusts of up to 70 km/h.

All alerts ended for the GTA shortly before 11 p.m.

The strong storms, which included bursts of lightening and intense rainfall at times, followed days of intense heat and humidity across southern Ontario.