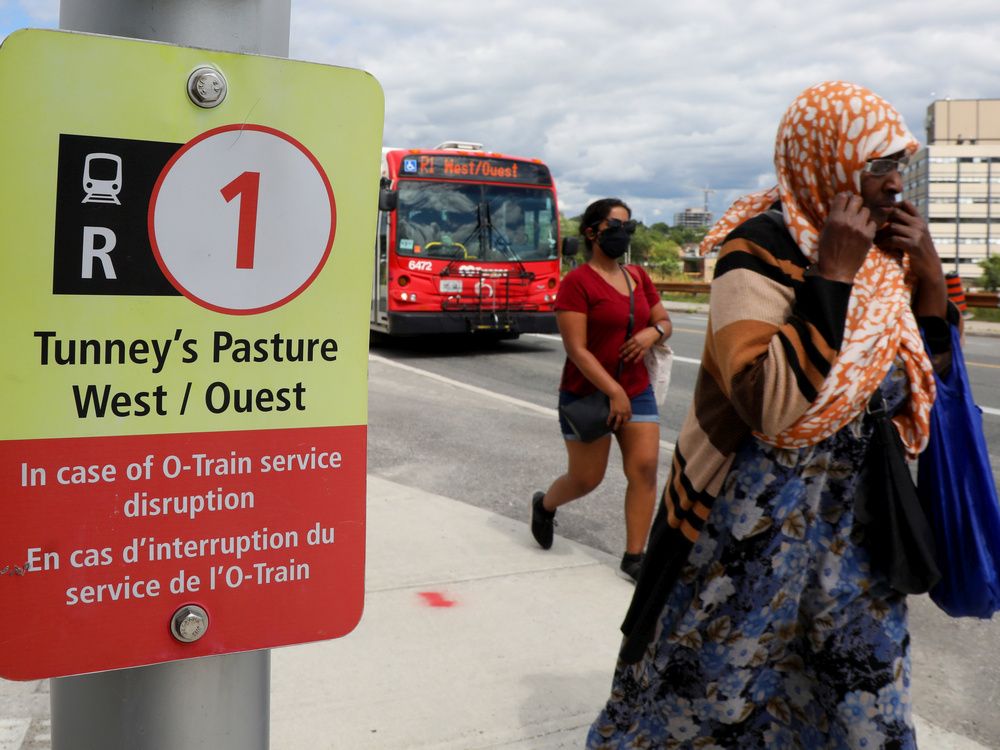 LRT officials said Tuesday the full 12.5-kilometre LRT line might not be running until Friday as workers repair storm damage, but they could face bigger questions about the premature breakdowns of wheel components on the Alstom Citadis Spirit trains.

Mario Guerra, the CEO of Rideau Transit Maintenance (RTM), said during a press briefing his “best estimate” was that the LRT system would be fully operational by Friday as workers replace about 900 metres of overhead wire damaged by a lightning strike on Sunday night between Lees and uOttawa stations.

A train carrying about 30 passengers safely stopped around uOttawa Station when the system lost power at 11:15 p.m. on Sunday during the thunderstorm. Transit staff transferred the passengers to another train.

The train will require a full inspection at the maintenance facility and officials hoped to send another train to tow it on Tuesday night. RTM cleared debris on the other track to get trains to the western leg of the railway.

The LRT system has “lightning arresters” to protect the power, but the direct lightning strike damaged infrastructure.

Guerra said lightning strikes happen on transit systems across the world, but this was the first time he’s seen a direct strike in his 40 years of experience.

Guerra said RTM will check to make sure the LRT system responded appropriately to the power loss, but he said “there’s not much we can do” about a lightning strike.

More worrisome might be the unrelated, ongoing struggle with train wheels. On Saturday, the city announced RTM removed 20 train cars from service after finding a fractured wheel hub on a vehicle that was flagged by an operator who noticed vibrations.

Guerra said RTM decided to pull any vehicle with over 175,000 kilometres of service for inspections. The hubs will be replaced with new ones and the old hubs will go through non-destructive testing, he said. In total, RTM is changing hubs on four axles per vehicle. Guerra estimated that two vehicles per day could be processed.

As of Tuesday afternoon, RTM had completed inspections on two of the 20 vehicles and Guerra anticipated having another two vehicles done on Wednesday morning. Guerra said a lab analysis would help determine the cause of the fractured hub.

The Transportation Safety Board is also investigating.

The most recent information provided to the transit commission in June on the LRT fleet size indicated there were 36 vehicles available for service. Rideau Transit Group (RTG) has been adding trains to the fleet as it prepares for Stage 2.

RTM and the city have said the latest wheel problem isn’t linked to the wheel bearing assembly breakdown in the August 2021 derailment near Tunney’s Pasture Station.

“It’s a different failure. We believe it may be fatigue-related, but we’re not 100 per cent sure yet until we have further testing through the lab,” Guerra said.

“This issue will be a lot easier to determine,” Guerra said.

The latest wheel mystery is so concerning that Alstom summoned experts from Europe to help with the investigation in Ottawa.

RTM doesn’t know yet if it’s simply a bad batch of hubs, or if it’s a larger issue.

Transpo general manager Renée Amilcar said the root-cause analysis of the latest wheel problem will lead to a final resolution.

“We want to make sure the service is safe. When we do believe there’s a risk, we’re simply removing the cars and trains from service,” Amilcar said.

One of the key allegations made by Alstom during the ongoing provincial LRT inquiry was that the rail infrastructure wasn’t built to the specifications it expected, placing extra loads on the train wheel components.

The LRT inquiry commission is paying attention to what has been happening in Ottawa this week, but it’s unlikely that anyone will be asked to testify about this week’s partial shutdown of the system or the wheel inspections.

A spokesperson for the commission said on Tuesday that it doesn’t expect to call further evidence.