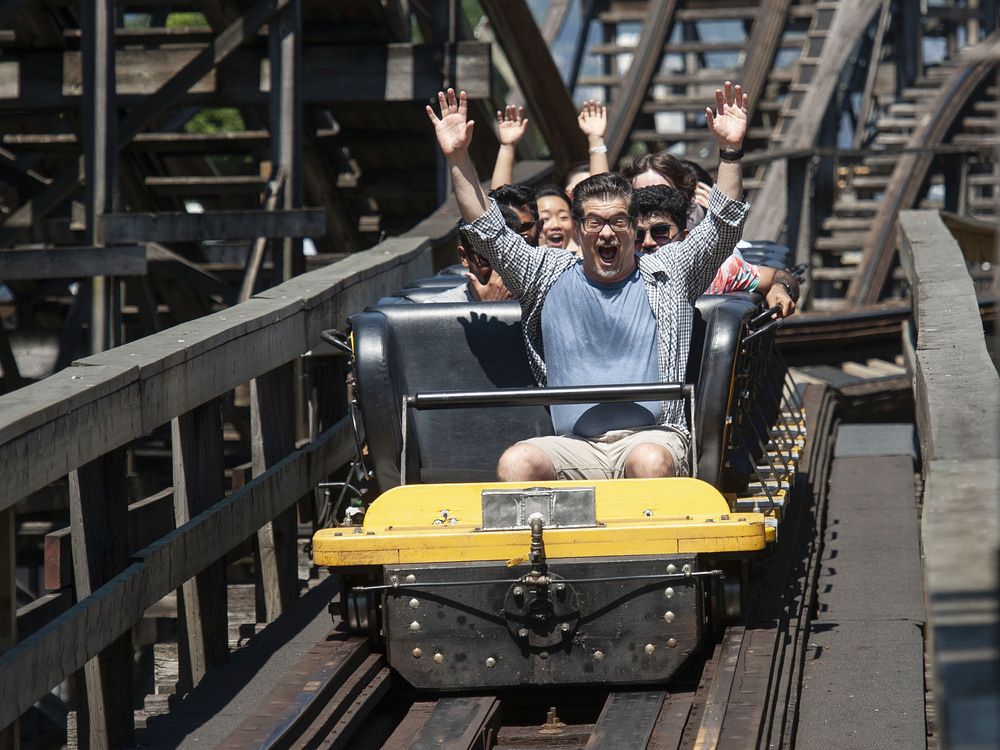 Seatbelts are the most noticeable new addition to Playland’s old wooden Coaster at the PNE following a $1-million, 18-month restoration.

The addition might disappoint wooden roller-coaster purists, but it did help me quell the stomach-churning sense you could be hurled out over the ride’s foam-padded steel lap bar at its first steep drop.

Riding is the only way to test the results of the most extensive one-time renovation the PNE has given the Coaster, so I agreed to give it a go for its first official week back in action — just in time to be in service for the park’s signature exhibition.

And it hasn’t lost any of the bone-rattling, heart-stopping, Old West-runaway-train ambience it has been famous for over its 64-year history.

“I was, like, the only thing that was holding me on that ride is the seatbelt,” said first-time rider Manish Choudhari, who lined up to take the newly re-opened ride at the same time. “I was falling from the top, and then you are just jumping from one (hill) to another one. So yeah, it was scary.”

Well, scary with an adrenalin-induced smile on your face kind of scary, as Choudhari’s wobbly kneed friend Thaminda Karunanayake attested.

“From the outside, it doesn’t look like it’s that scary,” Karunanayake said, “but I think the roughness of the ride … added to the excitement.”

True. The ride starts with a slow, almost gentle ride up the first incline, the chain clanking along as you are pulled to the first peak to look out at the North Shore mountains and downtown skyscrapers as the view opens up.

Even the first dip doesn’t feel that threatening, but gravity takes over to throw you down the first steep pitch, then thundering back up into the first sharp curve, with G forces alternatively trying to lift you out of the car then slam you to the side.

You rattle through three spiralling loops of inclines, followed by steep pitches and sharp curves on its turns around the ride’s route, generating plenty of “air time.”

The shuddering roar of Coaster’s wheels against rails echoes through the wood, making it hard to hear more than the screams of the riders behind you, especially the double hill on the final loop where you’re straining against the lap belt holding you in place.

“I was expecting a bit, like, a more smoother ride because I’ve (ridden) bigger ones,” Karunanayake said. “But this one, even the sound adds to it.”

“Scarier than I thought, but it’s fun,” he added after it was over.

The friends, relatively new to Vancouver, were drawn to the Coaster during their first visit to the park for its reputation as Playland’s signature, most-authentically antique ride, which was the reason there was no question it would get this mid-life restoration, according to PNE spokeswoman Laura Ballance.

“For us, we recognize that the Coaster is a jewel,” Ballance said. “It is the last of its kind in the world, in that it is the last remaining Walker LeRoy, Carl Phare ride in the world,” referring to the legendary head of construction and designer of the ride.

“It is consistently raised as one of the top few coasters of its kind in the world,” Ballance added.

The extensive renovation is something the PNE had been planning for a while, Ballance said, but the COVID pandemic that closed the fair for two years presented an opportunity to do the work.

PNE officials hired Quebec-based Martin and Vleminckx Rides as lead engineers for the restoration. It involved the replacement of 1,200 structural-grade Douglas fir timbers, which stand out in a pale, pressure-treated green in the otherwise weathered structure.

Ballance said maintenance crews regularly replace timbers to help keep the “living ride” in shape from year to year. First opened in 1958, it has seen several “major projects,” totalling maybe $200,000 at a time.

“It’s just a part of the fabric of our province, and I think that our goal was always to maintain it,” Ballance said.