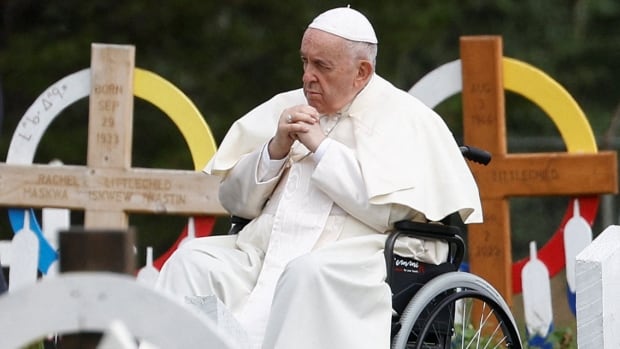 Thousands of Indigenous people have converged on the small Alberta prairie community of Maskwacis to hear a long-awaited apology from Pope Francis.

Francis arrived Monday morning at the site of the former Ermineskin Indian Residential School, where he is expected to apologize for generations of abuse and cultural suppression at Catholic residential schools across Canada.

During his visit to Maskwacis, Francis will speak in a large open area to school survivors, their relatives and other supporters.

Francis is expected to speak after 10 a.m. MT. You can watch his remarks here.

A number of live stream interpretation feeds, including in 12 Indigenous languages and American Sign Language, will be available on the official website of the Pope’s visit.

Arriving under a steady drizzle, busloads of school survivors, Indigenous elders and their family members were helped to find seats under tents near the site of the former residential school, now largely torn down.

One of the hosts of the event, Chief Randy Ermineskin of the Ermineskin Cree Nation, waited for the Pope in a nearby parking lot and took stock of the historic import of the day.

“I know they’re with me, they’re listening, they’re watching.”

Five teepees are set up at the site, with one of them representing the entrance to the former school.

In the afternoon, Francis is set to speak with Indigenous people and parish members at the Sacred Heart Church in Edmonton.

Later in the week, the Pope plans to host a large outdoor mass at Commonwealth Stadium in Edmonton and take part in a pilgrimage in nearby Lac Ste. Anne, before travelling to Quebec City and Iqaluit.

Francis arrived in Canada on Sunday for a six-day trip that is aimed at reconciliation with Indigenous people.

Francis committed to the Canadian tour on April 1, after meetings over several days with First Nations, Inuit and Métis groups at the Vatican. At the time, Francis apologized for the deplorable conduct of some church members involved in residential schools and promised to visit Canada.

An estimated 150,000 Indigenous children were forced to attend residential schools in Canada, where neglect and physical and sexual abuse were rampant. More than 60 per cent of the schools were run by the Roman Catholic Church.

The school in Maskwacis was one of the largest residential schools in Canada.

The Pope told reporters before his plane landed in Edmonton that the visit must be handled with care.

“I hope, with God’s grace, that my penitential pilgrimage might contribute to the journey of reconciliation already undertaken. Please accompany me with prayer,” said a message on the Pope’s Twitter account.