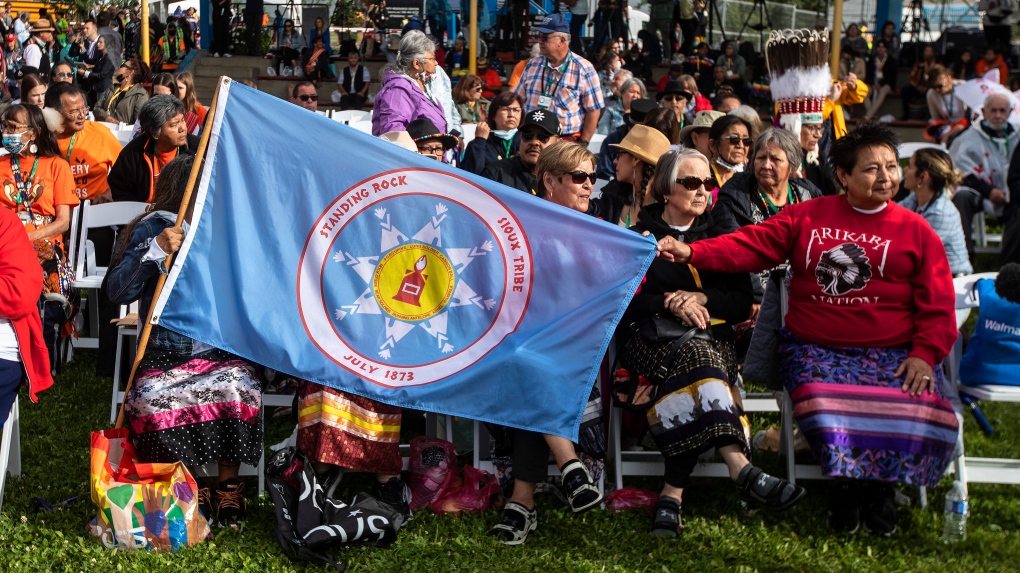 
Pope Francis is expected to speak publicly for the first time on his Canadian visit at a meeting Monday morning with First Nations, Inuit and Metis peoples in a community south of Edmonton.


The day’s events are to begin with a trip to Maskwacis, Alta., where the pontiff was to see the former site of the Ermineskin Indian Residential School, which was one of the largest institutions in the country.


It is expected that this is where the Pope will issue an apology to Indigenous residential school survivors and their families for the role the Roman Catholic Church played in the system.


Francis is scheduled arrive in Maskwacis at the Our Lady of the Seven Sorrows church, where he is to be greeted by a pastor of the community, Indigenous priest Gary Laboucane, as well as a small group of elders and local parishioners.


He is to then visit the Ermineskin Cree Nation Cemetery for a moment of silence, prayer and reflection. Organizers say there are likely remains of residential school students among the graves.


The Pope will then go to the site of the former residential school. Five teepees have been set up at the location — four representing the nations of the land and the fifth as symbol of the entrance to the former school.


It is then planned for Francis to head to an area known as Bear Park, or Maskwa Park, which is often used for powwows. Thousands of survivors, elders and their family are to be in attendance.


There is to be a traditional grand entry of chiefs before the Pope is welcomed by Chief Wilton Littlechild, who attended residential school for 14 years.


Prime Minister Justin Trudeau and Gov. Gen. Mary Simon, as well as other political and Indigenous leaders, are scheduled to attend.


Francis is expected to speak in Spanish, his first language, which will be translated into English by a priest.


Organizers say that a sacred fire will be burning in communities throughout the country in solidarity.


An estimated 150,000 Indigenous children were forced to attend residential schools in Canada, where neglect and physical and sexual abuse were rampant. More than 60 per cent of the schools were run by the Catholic Church.


Francis is set to speak later Monday with Indigenous Peoples and parish members at the Church of Sacred Heart in Edmonton.


Later in the week, the Pope plans to host a large outdoor mass at the city’s football stadium and take part in a pilgrimage in nearby Lac Ste. Anne, before travelling to Quebec City and Iqaluit.


Francis arrived Sunday for the six-day trip that is aimed at reconciliation with Indigenous Peoples.


A small crowd of dignitaries at the Edmonton airport included Trudeau, Simon and Indigenous leaders. The Pope made brief private remarks with organizers saying he has reserved public statements for Monday’s events.


Treaty 6 Grand Chief George Arcand Jr. said many people in the Indigenous community are skeptical and hurt, but an apology could be the start of a new journey.


“Many people have always felt that an apology was nothing but hollow words. But when the Pope made an announcement to come to Alberta and talk to our people, people started feeling like there was a sense of hope,” he said.


Arcand Jr. said an apology doesn’t erase the past but sets the way for communities to rebuild and work with the church, if necessary.


Indigenous leaders have said they are concerned the visit will open old wounds. Arcand Jr. called for more mental health supports to be put in place.


“I hope that when we hear an apology, we have the tools and the support necessary to help put people back together again.”


This report by The Canadian Press was first published July 25, 2022.