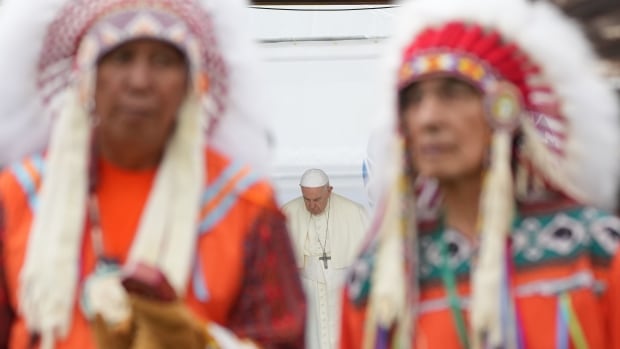 Thousands of faithful are expected to congregate inside an Edmonton football stadium Tuesday as Pope Francis holds a public mass.

The pontiff is expected to speak, and offer blessings, during a mass at Commonwealth Stadium where more than 65,000 people are expected to attend.

The mass will include Indigenous music and symbolism — and Indigenous community members from across Alberta and the Prairies will take part in various parts of the ceremony.

Francis is expected to arrive around 9 a.m. and begin a “Tour Among the People” in the Popemobile. This procession, accompanied by the sound of Indigenous drumming, will begin at Clarke Field before moving inside the open-air stadium.

Francis will prepare for his address inside a specially-prepared vestry room known as a Sacristy before delivering Holy Mass around 10:15 a.m. MT.

The mass is expected to include a Homily by the Holy Father and an address by Archbishop Richard Smith. The First Reading will be proclaimed by an Indigenous woman from the Enoch community, Pam Kootnay.

The mass is being held on July 26, the Feast of St. Anne, grandmother of Jesus, a day organizers say is a day of particular reverence for Indigenous Catholics.

An overflow viewing space at the adjacent Clarke Field has been set up to accommodate an additional 5,000 people.

Later in the day the pontiff is expected to travel to Lac Ste. Anne, northwest of Edmonton, to take part in the community’s annual pilgrimage.

The annual Lac Ste. Anne pilgrimage has been held for more than a century — though it was paused due to COVID-19 — and has long held significance for Indigenous Christians. The Pope is expected to spend about an hour at the site on the first day of the four-day pilgrimage.

Francis’s participation in the proceedings is expected to begin around 5 p.m. MT.

Francis began his week-long visit to Canada with a public address in Maskwacis, Alta. on Monday, where he asked for forgiveness for the role of Christians in residential schools.

Francis travelled to the lands of four Cree nations to pray at a cemetery.  Four chiefs then escorted the pontiff in his wheelchair to powwow ceremonial grounds where he delivered a long-sought apology and was given a feathered headdress.

Francis said the forced assimilation of Indigenous peoples into Christian society destroyed their cultures, severed their families and marginalized generations in ways still being felt today.

“I am deeply sorry,” Francis said, to applause from school survivors and Indigenous community members gathered at the former residential school south of Edmonton.

The Pope said his apology is only the first step in making amends with Indigenous people in Canada and that a serious investigation must be done into the facts of what occurred in the past.

“I humbly beg forgiveness for the evil committed by so many Christians against the Indigenous peoples,” Francis said near the site of the former Ermineskin Indian Residential School, now largely torn down.

His words went beyond his earlier apology for the “deplorable” acts of missionaries and instead took responsibility for the church’s institutional cooperation with the “catastrophic” assimilation policy, which Canada’s Truth and Reconciliation Commission said amounted to a “cultural genocide.”

More than 150,000 Indigenous children in Canada were forced to attend state-funded Christian schools from the 19th century until the 1970s in an effort to isolate them from the influence of their homes and culture.

On Wednesday, Francis will depart Alberta for Quebec City before travelling to Iqaluit.