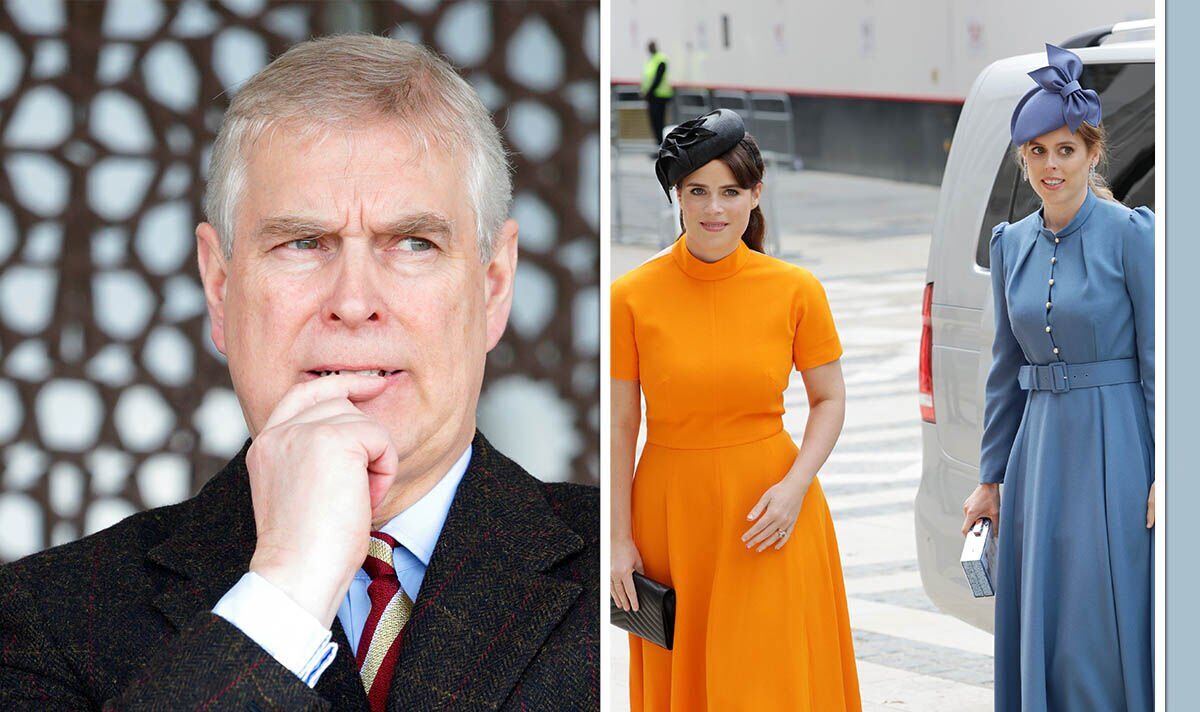 Taking to his YouTube account, Mr Sean said: “Andrew wants to make a return which he thinks could be achieved by his daughters carrying out charitable work.”

Princesses Eugenie and Beatrice were never granted an official role within the Royal Family.

While, as grandchildren of the sovereign, they have HRH styles and royal titles, they have crafted their own paths far from the Firm.

After earning their university degrees, Eugenie went on to work in an art gallery while Beatrice is employed by a US-based technology company.

And, on the last day of celebrations, they even headed to a street party to take part in activities and meet royal well-wishers.

Candidly showing her love for Her Majesty, Princess Beatrice was caught on camera telling one of the party attendees she is “very, very lucky” to have the Queen as her grandmother.

Beatrice and Eugenie have also made a name for themselves for their charitable work, as they back several organisations supporting causes close to their heart – including fighting teenage cancer and improving literacy – and have launched their own initiatives.

In June, Eugenie launched on his Instagram account the Advocate Ocean Series, with the aim to raise awareness of the importance of protecting the oceans in the run-up to the UN conference in Lisbon focused on this issue.

Andrew’s desire to return comes after he announced in mid-November 2019 he was temporarily stepping down from public duties.

This decision was taken just days after his disastrous interview with Newsnight’s Emily Maitlis, entirely focused on his association with convicted sex offender Jeffrey Epstein.

In January, just hours after a New York judge ruled against Andrew’s lawyers’ request to throw out the civil lawsuit that had been launched against the royal in August 2021 by Virginia Giuffre, the Duke of York returned to the Queen his royal and military patronages.

At the time, it was reported Prince Charles and Prince William had been “heavily involved” in Her Majesty’s decision to strip Andrew of his patronages.

A few weeks later, the Duke – who has strongly denied any wrongdoing since Ms Giuffre first launched allegations against him – settled the civil lawsuit out of court, in a move which did not represent any admission of liability on Andrew’s behalf.

Prince Andrew has since made only one appearance at an official event, as he accompanied the Queen to Westminster Abbey in March to attend the service of remembrance for Prince Philip.

Last month the Duke did not attend any event linked to the celebrations of the Platinum Jubilee as he tested positive for Covid just hours before the long bank holiday weekend began.

He had been tipped to attend the Order of the Garter service held in mid-June at St George’s Chapel.

The Duke of York’s name was included in the service’s programme as one of the royals taking part in the procession from Windsor Castle to the chapel.

However, shortly before the beginning of the service, it was said Andrew would no longer attend the public event despite remaining a Knight of the Garter.

While his absence was described as a “family decision”, one source quoted in the Evening Standard suggested Prince William had much to do with the decision as he reportedly launched an ultimatum, saying he would not attend the service alongside his uncle.

Mr Sean claimed Prince Charles and Prince William’s stance against the Duke’s return to public life has had an impact on the relationship between the two senior royals and Andrew’s daughters.

He said on his YouTube channel: “According to very good sources, Princesses Eugenie and Beatrice are seemingly struggling to remain cordial with Prince William, Catherine, and Charles.

“It stems from the deal organized by William, the Queen, and Prince Charles to remove their father Prince Andrew from royal duties following his disgrace in recent years.

“The thawing between the two families has been difficult.

“Prince William and Charles are doing this for the benefit of the monarchy.

“They are reading the public mood, which is saying that Andrew should permanently retire from public life.”