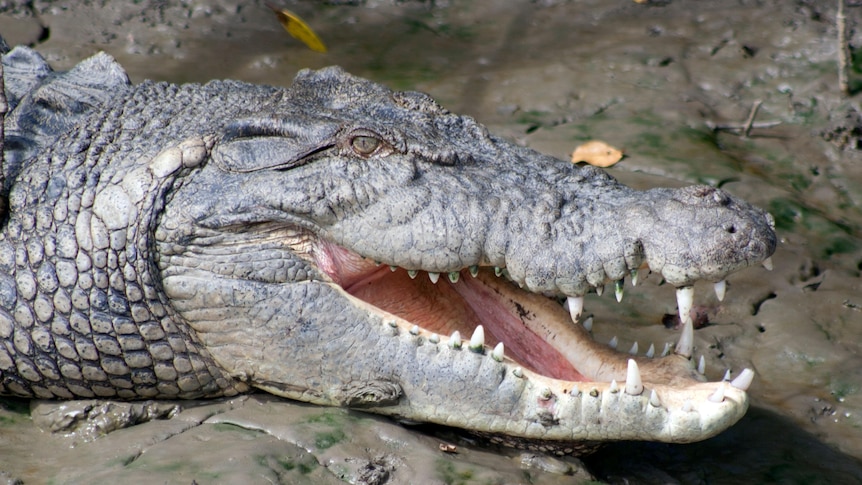 Large saltwater crocodiles in the Whitsunday region will soon be monitored in an effort to determine their movements in relation to nearby popular tourism areas.

The Proserpine River inlet, less than 25 kilometres south of Airlie Beach, includes a section of river that is home to some of the largest crocodiles in Queensland, according to Department of Environment and Science [DES] program coordinator Matthew Brien.

Dr Brien said there was not a lot of habitat in the area for them to occupy.

“There’s a lot of crocs, a lot of big crocs, in a short area of the Proserpine [River],” he said.

“We’re only talking about roughly 15 to 20 kilometres that these animals are in.

In addition to their size, Dr Brien said the department was particularly conscious of the high number living in such a concentrated area.

“The Proserpine River has the highest density of crocodiles anywhere in Queensland,” he said.

“It’s got five-and-a-half crocodiles per kilometre.

“The average in Queensland is one per kilometre, and the next highest is about three-and-a-half per kilometre, which is up in the north-western Cape [Peninsula].

“It’s unusual to have such a high density of crocodiles so far south.

“It is quite an anomaly.”

Satellite tracking to be used

The department plans to begin a monitoring program in October or November this year, which Dr Brien said would not only be used for tracking, but also to learn more about the behaviour and social hierarchy of adult males coexisting in such a dense population.

“They’re living together side by side, and how they do that, I guess, is the next question,” he said.

“We’re looking at answering that question by putting satellite trackers on some of those animals to get a better understanding of movement and how they interact with each other.”

Dr Brien said overnight traps would be used to attach half a dozen trackers to the nuchal shield on the neck of each animal, which typically remain in place for one-to-two years, and gather data.

It will be the first time satellite tracking is used on crocodiles in the Proserpine River by DES, with Dr Brien citing public safety as a key motivator.

“Whatever we do in that research space — monitoring the numbers, looking at the genetics of the population and the tracking — it’s all geared towards informing for management,” Dr Brien said.

“Obviously, the Proserpine [River] is on the doorstep of some pretty important tourist destinations.”

But the Proserpine River is one of those tourism attractions.

Steve Watson has been running crocodile tours on the Proserpine River for more than 20 years and said he was nervous about the impact of the initial trapping.

“My main concern with that is that if they happen to choose to catch and fit devices to crocs that we see regularly, I’m really concerned about their future behaviour in relation to what we’re going to see on a cruise,” he said.

“On a good day, we’ll see probably upwards of a dozen large animals.

“These crocs are actually the ones that we identify with and have recognised their normal behaviours, so I’m expecting that if they are captured or interfered with, then that’s going to change altogether.”

“Quite often people will make a comment at the end of the day that they just didn’t realise the roles that the crocodiles have in the environment,” Mr Watson said.

“They just saw them as a fierce predator that was feared.”

Where do the crocodiles go?

While crocodiles are rarely sighted in nearby Whitsunday tourism hotspots, Dr Brien argues it is important to know if larger males are moving from their habitat.

“At this stage we’ve had very little to no indication that crocodiles are venturing out onto the islands and into places like Airlie Beach, or not very often,” Dr Brien said.

“[But] there are a number of big animals in a small area so [we need to] understand what’s happening now and what may happen in the future so that we can manage that and minimise the threat to public safety.”

It is hoped the findings will add another layer of data to crocodile numbers in the Proserpine River, which are recorded by DES every few years through night-time spotlighting and aerial surveys.