> Rolling Down to Old Ma-rtins: Sea shanty festival kicks off Skip to content 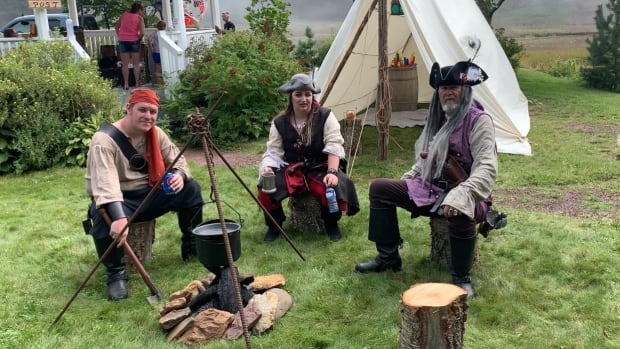 It’s taken over a year of work and working through two viral sensations — one literal — but St. Martins’ first annual Fundy Sea Shanty Festival is happening this weekend in the Bay of Fundy community.

The three-day festival features 11 acts from across the world, as well as lectures, whisky tasting and a pirate parade.

And all it took was the revitalization of the art form brought about by boredom during the coronavirus pandemic, prompting the songs to themselves go viral on Instagram and TikTok.

Gary Caines is the festival’s organizer. He also performs in the shanty group Before the Mast.

“When TikTok went crazy with The Wellerman, there was a lot of excitement and interest in sea shanties,” said Caines.

“I was interviewed by a number of newspapers and radio broadcasts about sea shanties. I took that as a sign, maybe it is time for a festival.”

There’s a lot of history to the songs, some of which are hundreds of years old.

While many of them may be considered drinking songs, with their proper place a pub, their origin was much less laid-back.

“They were work songs,” said Caines.

“Most people don’t know that. They think sea shanties are something that you sing in the pub … but these were actual work songs. They served a purpose and they need to be respected because they were sung by the people who helped forge nations as we know them today.”

Chris Ricketts, who is from the U.K. and is one of the festival’s performers, said it’s nice to be back on tour again after COVID-19 pandemic restrictions. He said this is his first sea shanty festival in four years.

“It’s been a really challenging few years with the pandemic, but it’s just nice to be back out singing in front of real life humans again,” said Ricketts.

While many people fell in love with sea shanties during the pandemic, Ricketts’ appreciation goes back to his university days.

“We were told we had to sing songs from where we’re from and I was from Portsmouth, a seaside town,” said Ricketts.

“I was trying to be a bit rebellious … and sang a load of sea shanties as part of my recital at the end of that. And needless to say I failed.”

After a lifetime of love, and over a year of planning, Caines said he’s looking forward to connecting with shanty lovers.

“I’m looking forward to looking out at the audience and seeing them tapping their toes and nodding their heads, saying, ‘Wow, this is cool,'” said Caines.