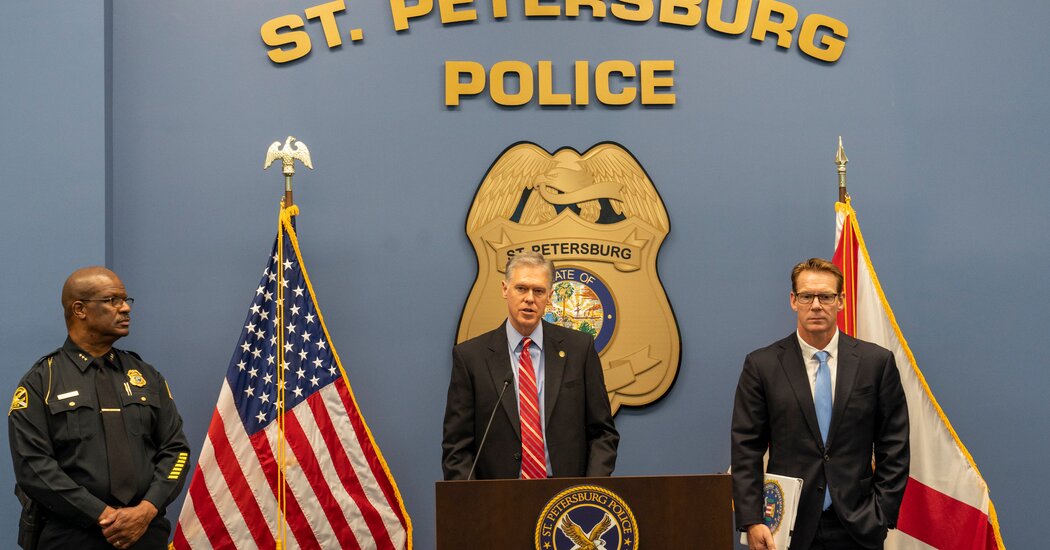 MIAMI — The Russian man with a trim beard and patterned T-shirt appeared in a Florida political group’s YouTube livestream in March, less than three weeks after his country had invaded Ukraine, and falsely claimed that what had happened was not an invasion.

“I would like to address the free people around the world to tell you that Western propaganda is lying when they say that Russia invaded Ukraine,” he said through an interpreter.

His name was Aleksandr Viktorovich Ionov, and he described himself as a “human rights activist.”

But federal authorities say he was working for the Russian government, orchestrating a yearslong influence campaign to use American political groups to spread Russian propaganda and interfere with U.S. elections. On Friday, the Justice Department revealed that it had charged Mr. Ionov with conspiring to have American citizens act as illegal agents of the Russian government.

Mr. Ionov, 32, who lives in Moscow and is not in custody, is accused of recruiting three political groups in Florida, Georgia and California from December 2014 through March, providing them with financial support and directing them to publish Russian propaganda. On Friday, the Treasury Department imposed sanctions against him.

David Walker, the top agent in the F.B.I.’s Tampa field office, called the allegations “some of the most egregious and blatant violations we’ve seen by the Russian government in order to destabilize and undermine trust in American democracy.”

In 2017 and 2019, Mr. Ionov supported the campaigns of two candidates for local office in St. Petersburg, Fla., where one of the American political groups was based, according to a 24-page indictment. He wrote to a Russian official in 2019 that he had been “consulting every week” on one of the campaigns, the indictment said.

“Our election campaign is kind of unique,” a Russian intelligence officer wrote to Mr. Ionov, adding, “Are we the first in history?” Mr. Ionov later referred to the candidate, who was not named in the indictment, as the one “whom we supervise.”

In 2016, according to the indictment, Mr. Ionov paid for the St. Petersburg group to conduct a four-city protest tour supporting a “Petition on Crime of Genocide Against African People in the United States,” which the group had previously submitted to the United Nations at his direction.

“The goal is to heighten grievances,” Peter Strzok, a former top F.B.I. counterintelligence official, said of the sort of behavior Mr. Ionov is accused of carrying out. “They just want to fund opposing forces. It’s a means to encourage social division at a low cost. The goal is to create strife and division.”

The Russian government has a long history of trying to sow division in the U.S., in particular during the 2016 presidential campaign. Mr. Strzok said the Russians were known to plant stories with fringe groups in an effort to introduce disinformation into the media ecosystem.

Federal investigators described Mr. Ionov as the founder and president of the Anti-Globalization Movement of Russia and said it was funded by the Russian government. They said he worked with at least three Russian officials and in conjunction with the F.S.B., a Russian intelligence agency.

But leaders of the Uhuru Movement, which is based in St. Petersburg and part of the African People’s Socialist Party, said that their office and chairman’s home had been raided by federal agents on Friday morning as part of the investigation.

“They handcuffed me and my wife,” the chairman, Omali Yeshitela, said on Facebook Live from outside the group’s new headquarters in St. Louis. He said he did not take Russian government money but would not be “morally opposed” to accepting funds from Russians or “anyone else who wants to support the struggles for Black people.”

The indictment said that Mr. Ionov paid for the founder and chairman of the St. Petersburg group — identified as Unindicted Co-conspirator 1 — to travel to Moscow in 2015. Upon his return, the indictment said, the chairman said in emails with other group leaders that Mr. Ionov wanted the group to be “an instrument” of the Russian government, which did not “disturb us.”

“Yes, I have been to Russia,” Mr. Yeshitela said in his Facebook Live appearance on Friday, without addressing when he went and who paid for his trip. He added that he has also been to other countries, including South Africa and Nicaragua.

In St. Petersburg, Akilé Anai of the Uhuru Movement said in a news conference that federal authorities had seized her car and other personal property.

She called the investigation an attack on the Uhuru Movement, which has long been a presence in St. Petersburg but has had little success in local politics.

“We can have relationships with whoever we want to,” she said, adding that the Uhuru Movement has made no secret of backing Russia in the war in Ukraine. “We are in support of Russia.”

Mr. Ionov is also accused of directing an unidentified political group in Sacramento that pushed for California’s secession from the United States. The indictment said that he helped fund a 2018 protest in the State Capitol and encouraged the group’s leader to try to get into the governor’s office.

And Mr. Ionov is accused of directing an unidentified political group in Atlanta, paying for its members to travel to San Francisco this year to protest at the headquarters of a social media company that restricted pro-Russian posts about the invasion of Ukraine. Mr. Ionov even provided designs for protest signs, according to the indictment.

After Russia invaded Ukraine in February, the indictment said that Mr. Ionov told his Russian intelligence associates that he had asked the St. Petersburg group to support Russia in the “information war unleashed” by the West.