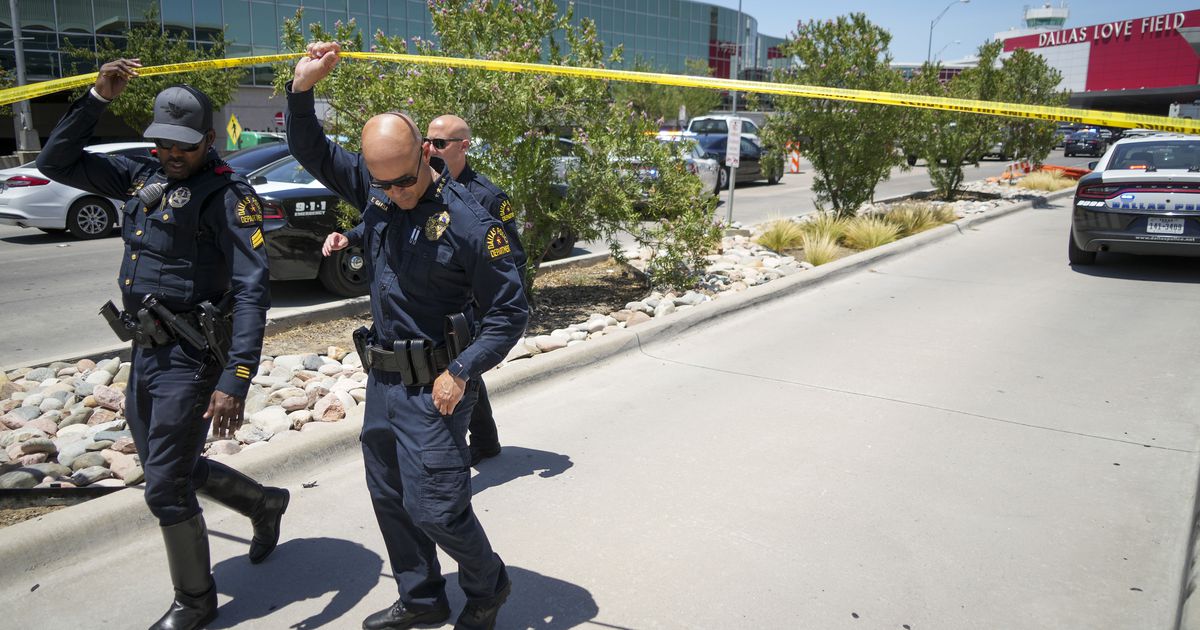 As recently as last summer a Dallas County judge found the woman accused of opening fire inside a terminal at Dallas Love Field airport was not a danger to others, Dallas County records show.

Portia Odufuwa, 37, was shot by police Monday after she pulled out a gun at the airport, aimed it toward the ceiling and fired several times, Dallas police said. No one else was injured. Odufuwa was struck in the lower body and hospitalized, police said. The extent of her injuries was unknown.

Dallas County Judge Kristin Wade found Odufuwa incompetent to stand trial in a June 2021 misdemeanor case and referred her to outpatient mental health services. Odufuwa was accused of pulling a fire alarm when there was no threat. Wade could not be reached for comment and Odufuwa’s mental status could have changed since then.

On Monday, Dallas police said Odufuwa was dropped off at the airport about 11 a.m., where she went inside the bathroom and came out wearing a hoodie before the shooting.

Court records show she has previously faced charges including arson, robbery, criminal trespass and false reporting — all filed in cities across North Texas over the past several years. The outcomes of some cases were unclear Monday though several were dismissed. Court records show she has previously told police she is married to celebrity Chris Brown and that she is “God’s prophet.”

It was unclear Monday what mental health diagnoses Odufuwa has that led to her being found incompetent to stand trial. Being found incompetent means defendants can not assist in their own defense or identify participants in the courtroom such as the judge. They then undergo counseling and sometimes medication to restore them to competency.

It was unclear whether Odufuwa had an attorney. An attorney listed in court records on the arson charge said Monday he doesn’t currently represent her. She was most recently appointed a lawyer from the county public defender’s mental health unit. That attorney could not be reached for comment.

A woman who answered the door for a home listed for Odufuwa in public records declined to comment. The red-bricked home is located in a quiet community of townhomes in Wylie, about 25 miles northeast of downtown Dallas. Odufuwa’s family declined to comment.

What we know about the shooting at Love Field airport

In the case where Odufuwa is accused of pulling the fire alarm, Mesquite police said Monday she was arrested April 25, 2021.

Police said Odufuwa was staying at a hotel in the 4000 block of Towne Crossing, and was refused an extension to her stay. Odufuwa became upset and pulled the fire alarm in front of the clerk, police said.

In that case, Odufuwa gave the address for Brown’s mansion as her home.

That filing a false report case was dismissed by Wade, the judge, in November 2021 even though Odufuwa “did not successfully complete the program” when she was found incompetent to stand trial, according to Dallas County court records. She was expected to continue mental health services elsewhere.

In court records for that case, “homeless” is typed as Odufuwa’s address. Odufuwa appears to have written “not homeless just a situation” beside it.

One of the most serious cases stemmed from a 2019 arson arrest in Mesquite. The Dallas County District Attorney’s office rejected the arson case because of a lack of scientific evidence, District Attorney John Creuzot said. Creuzot said he did not immediately have additional details.

Odufuwa was standing outside, watching it burn, and requested to speak with a police officer. She told the officer she was “responsible for the fire,” according to an arrest-warrant affidavit.

Odufuwa told police that she previously lived inside the house and returned because “it never fully burned down,” according to the affidavit. She said the home had been burned down twice before and the officers wouldn’t understand why she burned it down, the affidavit said.

Neighbors also confirmed to police Odufuwa lived at the home in the past and started fires there, according to the affidavit.

Odufuwa said she walked to the home from “the other side of town,” the affidavit said. She told police she’s originally from California and planned to go back there.

She refused to give more information until she could speak with her husband, whom she identified as Brown, police wrote in the affidavit. She was not married to Brown.

In the arson case, the owner of the home told investigators he wanted to pursue charges, the affidavit said. Police wrote in the affidavit no one else was suspected to be inside the home “as the property was in a state of disrepair due to the previous fires.”

Odufuwa was also accused of robbing a bank in Wylie on April 5, 2019.

Wylie police said Odufuwa entered the Bank of America in the 1300 block of West FM544 and displayed a note demanding an undisclosed amount of money. Customers were moved to a safe location, and responding officers found Odufuwa nearby as she tried to flee, police said at the time.