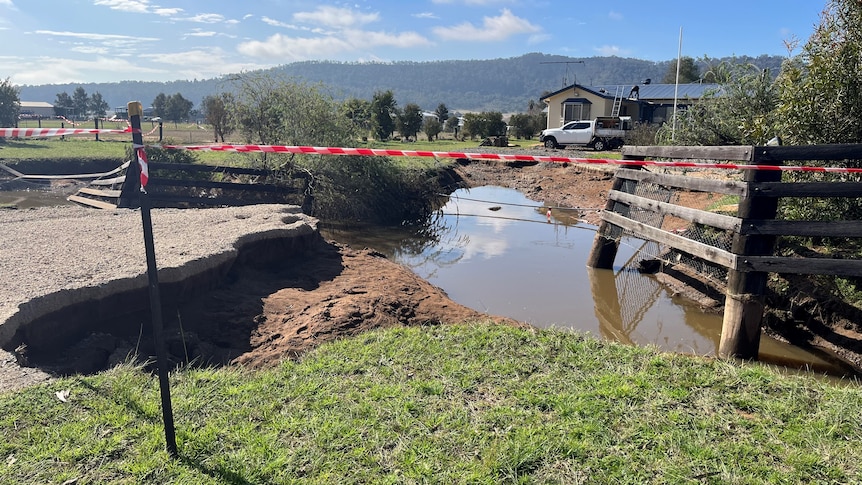 Dozens of sinkholes have appeared in the rural Hunter Valley community of Broke in the aftermath of flooding rains.

Residents have told the ABC there are at least 30 sinkholes, also called erosion holes.

Angela Andonopoulos has been coordinating a community-driven flood recovery response and said sinkholes were the last thing that people needed.

“Some of these sinkholes are massive and the size and the depth of a swimming pool,” she said.

“It’s not just that they are refilling with water constantly, it is also the contamination factor. With floodwater there is also the issue with the collection of sewage.”

The ABC visited the village on Monday and the stench from that sewage was suffocating.

Singleton Shire Council said it was currently liaising with Public Works Advisory to investigate possible solutions to sinkholes within the township.

Police are coordinating the response, cordoning off impacted areas.

The sinkholes have appeared in driveways, under houses, in front and back yards, and in paddocks.

Caravans and vehicles have been swallowed up, as have fences.

The council is urging people to be cautious around the dozens of sites impacted.

The sinkholes are not the only cause from for concern.

Ms Andonopoulos took to social media to thank the community for rallying together.

“The entire contents of many homes are currently waiting out on the roads for insurance assessors and council removal,” she said.

“The clean-up and rebuilding mission will continue over the upcoming weeks and months, and we ask for your patience.”

Get local stories told by the people who are living them with the Newcastle Hunter Catch Up podcast.