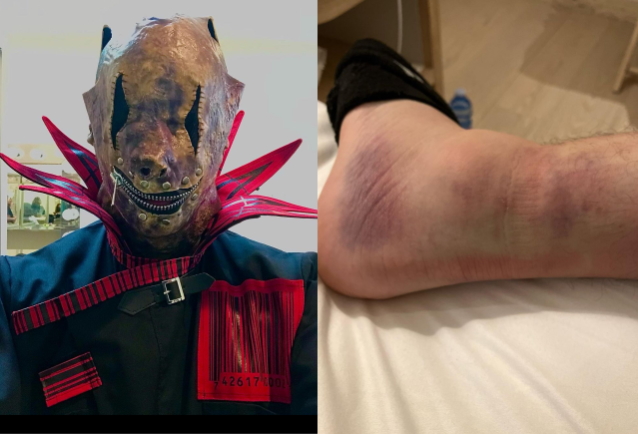 SLIPKNOT‘s latest recruit, the multi-instrumentalist nicknamed Tortilla Man, has injured his ankle. It’s unclear when the incident took place, but Michael Pfaff shared an Instagram photo on Sunday (July 24) of his bandaged left leg, and he included the following caption: “SLIPKNOT….if you don’t get hurt once in a while, you’re probably not doing it right. See you Tuesday, VERONA”.

SLIPKNOT performed in Athens, Greece on Saturday (July 23) and is next scheduled to play Verona, Italy tomorrow (Tuesday, July 26).

SLIPKNOT kicked off its summer 2022 European tour on July 20 at Romexpo in Bucharest, Romania. Support on the trek is coming from JINJER and VENDED, the band fronted by Griffin Taylor, son of SLIPKNOT singer Corey Taylor.

SLIPKNOT officially confirmed Pfaff‘s identity in March. Pfaff previously played keyboards with SLIPKNOT‘s Shawn “Clown” Crahan in the band DIRTY LITTLE RABBITS and is also a member of the Iowa-based duo THE SNACKS.

Tortilla Man joined SLIPKNOT in May 2019, when he was first featured in the video for comeback single “Unsainted”. Since then, there has been much speculation about his name, with some SLIPKNOT fans getting quite obsessed with trying to work out the real identity of the band’s latest recruit.

In February 2020, several photos were posted to the Postojna Cave Facebook account supporting the theory that Pfaff was Tortilla Man.

Pfaff‘s name was first brought up in relation to Tortilla Man in August 2019 when SLIPKNOT guitarist Jim Root gave an interview to “The Art And Span Show” in which he described the mystery man as “a world-class pianist” and “a great percussionist” who is “schooled in music.”

Pfaff was apparently introduced to Crahan years ago by SLIPKNOT‘s resident DJ Sid Wilson, which may explain why Tortilla Man has such good onstage chemistry with Sid and Clown. In addition, Pfaff has a similar build and height as Tortilla Man, and Redditors have found that Pfaff‘s family members are following “#tortillaman” and other hashtags on social media related to the newest member of SLIPKNOT.

Crahan refused to reveal the identity of the band’s mysterious new ninth member in an interview with Kerrang! magazine, saying it was “nobody’s fucking business.”

SLIPKNOT‘s previous percussionist, Chris Fehn, sued the band in March 2019, claiming he hadn’t been properly compensated for his years of touring and recording with the group. Fehn, a member since 1998, was officially dismissed from the band in 2019.

In an interview with Zane Lowe on Beats 1, SLIPKNOT singer Corey Taylor said Tortilla Man had won the respect of bands and fans. “He’s doing great and is a great dude,” he said. “He’s killing it, man.”

Asked how anyone becomes an official member of SLIPKNOT, Taylor said: “First of all, you’ve got to wear the tortilla on your face. And the audience has to figure out who you are. With Tortilla Man, it’s kinda cool. It’s brought this whole new energy to everybody as well, so it’s a lot of fun to watch him as well.”

SLIPKNOT‘s seventh studio album, “The End, So Far”, will be released on September 30 via Roadrunner Records. The follow-up to 2019’s “We Are Not Your Kind”, it will be the band’s final record with Roadrunner after first signing with the rock and metal label in 1998. 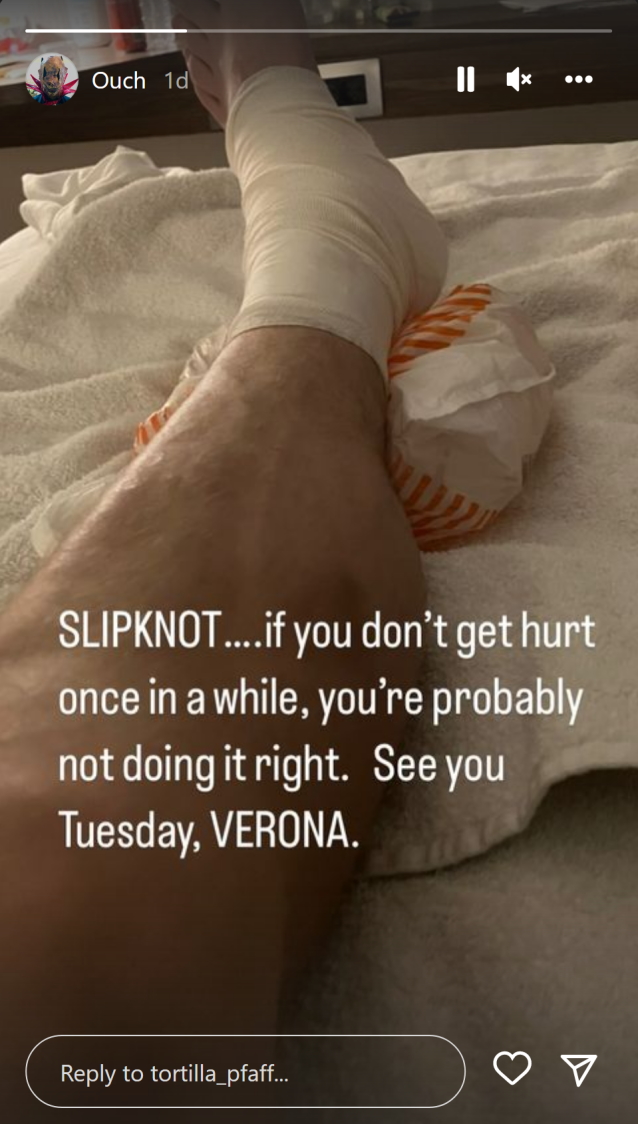