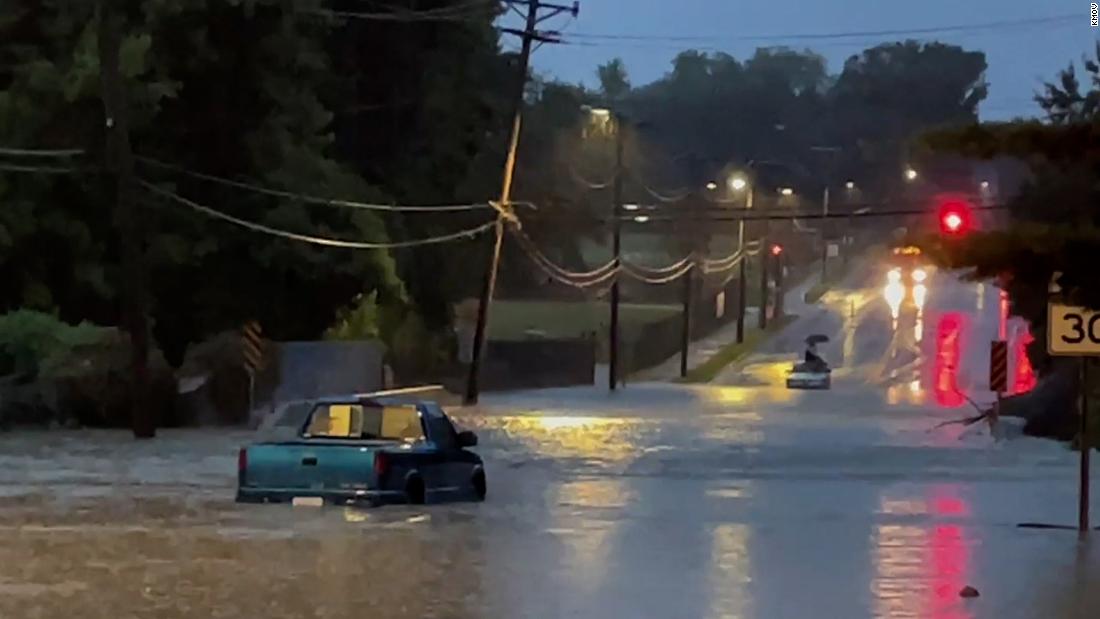 In the wider St. Louis area, about 6-10 inches of rain fell from midnight to 6 a.m., according to the weather service.

“We urge everybody to avoid travel!” the office posted to Twitter, adding central portions of the county were affected most.

Vehicles were reported submerged or otherwise stranded on flooded streets in various parts of the St. Louis area, the weather service said shortly after 6:30 a.m.
In the city itself, fire personnel checked about 18 flooded homes, and rescued six people and six dogs by boat, the city fire department said early Tuesday. In the suburb of University City, a rescue from a stranded vehicle was reported early Tuesday, the weather service said.

Motorists are urged to avoid I-70 in the St. Louis area because of flooding, the state highway patrol said. At least one stretch of I-70 — in St. Peters, roughly a 30-mile drive northwest of St. Louis — was reported closed in both directions, the weather service said.

“Many areas of St. Charles and St. Louis counties are experiencing flash flooding. Specifically I-70!” the patrol said. “Avoid this highway and use alternate routes this morning. Please don’t attempt to cross flooded roadways.”
The three other interstates heading to downtown St. Louis — I-64, I-55, and I-44 — also had at least one closure early Tuesday, CNN affiliate KMOV reported.

Rainfall this intense in the St. Louis area only occurs once every 500 years, on average, according to data from the weather service.

But the climate crisis is pushing these extremes to become more frequent, and is supercharging rainfall around the world. The atmosphere can hold more moisture as temperatures climb, making it even more likely that significant records will be broken. More water vapor in the atmosphere means more moisture available to fall as rain, which leads to higher rainfall rates.
Human-caused fossil fuel emissions have warmed the planet a little more than 1 degree Celsius, on average, with more intense warming over land areas. Scientists are increasingly confident in the role that the climate crisis plays in extreme weather, and have warned that these events will become more intense and more dangerous with every fraction of a degree of warming.