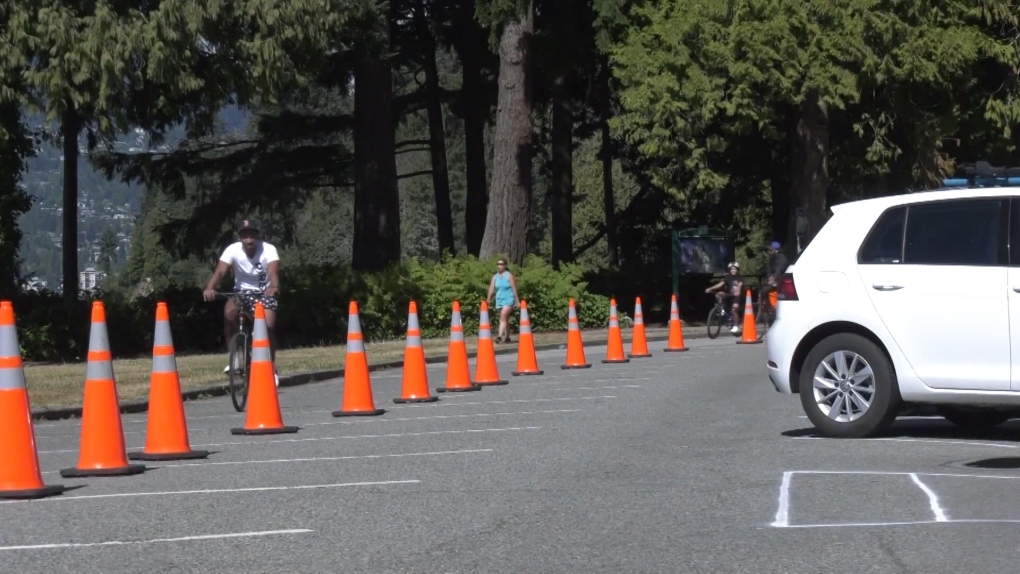 The current configuration of the temporary bike lane through Stanley Park makes it impossible to stage major events in the park, said a Vancouver event organizer.


Paul Runnals is the co-owner of Brandlive, a company which runs major events including the Honda Celebration of Light and Canada Day at Canada Place. Runnals is also the founder of the Skookum Music Festival which ran in Stanley Park in 2018 and 2019.


“(Stanley Park) has proven itself to be a really good site,” Runnals said. “It’s convenient and there’s very few locations left anywhere in proximity in downtown Vancouver where you can stage these larger events without having big impacts into residential areas.”


But Runnals said the temporary bike lane “eliminates any potential for major events” in the park because some sections use concrete barriers instead of moveable cones.


Trucks that carry staging and sound equipment generally enter the park using Pipeline Road, because they’re too tall to fit under the bridge on Park Drive at the Coal Harbour entrance. The trucks would normally then take a police escort the wrong way along Park Drive to the event site at Brockton Fields.


“It’s worked numerous times on these big events,” Runnals said. “(But) the concrete barriers are going to have to come out if there’s ever going to be another event in the park.”


The configuration of the temporary bike lane is set to remain in place until the completion of the Stanley Park Mobility Study, scheduled for early 2023. CTV News has learned the total budget of the study is $259,474 and so far $99,738 has been spent.


Runnals said there’s been “no consultation whatsoever” with the events sector about the bike lane. He also raised these concerns at the last Vancouver Park Board meeting when commissioners voted 5-2 in favour of proceeding with the Stanley Park Mobility Study, despite a heated debate.


Vancouver Park Board senior planner Emily Dunlop said staff have been consulting with Destination BC and Tourism Vancouver as the voices for industry when it comes to access needs in the park.


“Our engagement process is very thorough,” Dunlop said. “There are many, many different events that happen in the park, so we are slowly working through that group.”


When asked about Skookum potentially not being able to return, Dunlop said staff “want to work closely with Skookum” to look at any access issues.


“That includes potentially adjusting things, moving barriers, that is certainly a possibility,” Dunlop said, adding that potential changes will only be made until after the study is complete.


Runnals said pushing a decision that far into the future could jeopardize planning for the next few years, given how long it takes to put big events together.


“The delay into October or November or however long this process takes is very likely going to impact the ability for any of these bigger events to commit to next summer,” he said. “Certainly 2024 is well within grasp if we can get this figured out this year.”


The pandemic resulted in some lost parking revenue for the Vancouver Park Board but Steve Jackson, the director of business, said things are improving.


According to Jackson, total parking revenues were down about $2-million in 2020. That’s a result of a complete closure of the park to cars for three months, pandemic restrictions and an almost complete drop off in tourism.


“We think (the bike lane) does play a role, of course, with knock on impacts on the ability to host events, but we do believe tourism and the drop off there was the biggest component,” Jackson said.


When asked about any missed revenue from large events not happening in the park, Jackson said: “A really large event like Skookum would bring in a decent amount of revenue for the Park Board for that short period of time, (but) we don’t rely on events of that size as a significant revenue stream to make our budgets work.”


The goal of the study is to assess the feasibility of reducing vehicle traffic through the park. Commissioner John Irwin said because of the climate crisis: “We need to look seriously about how we get people around.” Vancouver Park Board staff said there was strong community support for the undertaking, as shown in public surveys. The report says 70 per cent of survey respondents reported that “they believe there are opportunities with reducing vehicle traffic.”


But there has also been strong backlash, including from Commissioner Tricia Barker.


The bike lane is also the subject of a human rights complaint that will be going before the Human Rights Tribunal in August.