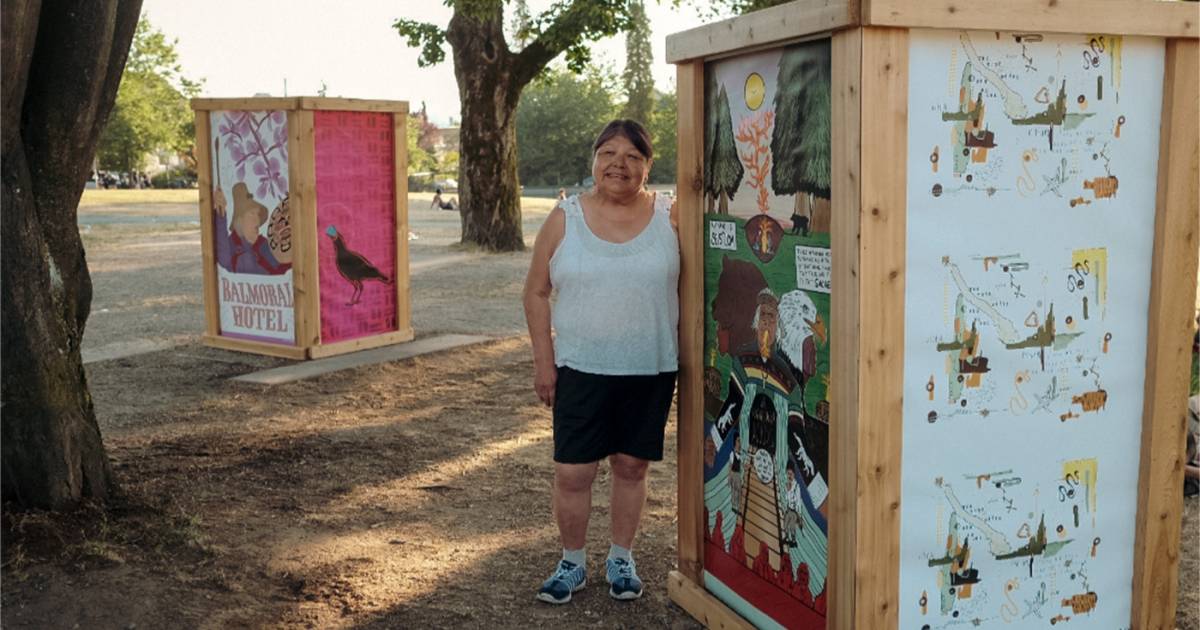 Nlaka’pamux elder and residential-school survivor Mechelle Pierre remembers the first thing that she did as a “proud Indigenous person”.

It was back in 1968, when she volunteered for a fundraiser to assist organizations helping First Nations and Métis people in Vancouver.

“We walked all the way from Vancouver to Hope,” Pierre recalls in a phone interview with the Georgia Straight. “We looked for pledges per mile. That’s how we raised funds. It took us three days to get there.”

Inspired by her mentor, Huu-ay-aht First Nation member Marjorie White, Pierre went on three more of these annual walks. The final time, she was eight months pregnant yet she still managed to reach her destination.

“There was no turning back,” Pierre says.

At this month’s Vines Art Festival, Pierre has curated and directed a project called Lake of Dreams, which is a series of Indigenous residential-school survivors’ stories on video.

The second component, the Lake of Dreams installation in Grandview Park, offers visual responses to the elders’ stories by young Indigenous graphic artists. (Visit the Vines Art Festival website to see the artworks.)

One of the elders is art teacher Arthur Bolton, a Tsimshian man from Terrace who survived the Alberni Indian Residential School. It was run by the Presbyterian Church in its early days and then, from 1925 to 1969, by the United Church of Canada.

In the video, Bolton says that after being abused in residential school, he would rather give than receive and that he is not prejudiced against anyone.

The visual response by Valen Onstine in the Grandview Park installation shows an older black bear bonding with a cub in front of a sumptuously colourful sky and lush green forest.

“Art just very quietly and gently offers kids how to draw and learn about Native design,” Pierre says. “And they just love that so much—to the point where they even go to his house on weekends to do it.”

She says that all the elders chosen for Lake of Dreams are humble yet strong people with tremendous integrity who have dedicated their lives to helping others.

“No glory seekers were allowed,” Pierre adds with a laugh.

Another video features storyteller Rosemary Georgeson, whose mother went to residential school. In the video, Georgeson talks about being raised by her grandparents on Galiano Island, where the family made their living in the fishing industry.

White, founder of the Circle of Eagles Lodge that helps Indigenous ex-inmates, also shares her experiences in Lake of Dreams. The visual response by painter Emily Pearson shows White in the middle of the street outside the Vancouver Aboriginal Friendship Centre—where she worked—with roots under her feet connecting to younger generations of Indigenous women.

“She was my first boss at the friendship centre,” Pierre says. “Marge was, to me, the most important person in my life. My life path began with her.”

The 74-year-old Pierre, like so many other residential-school survivors, endured monumental horrors as a student at the Anglican Church–run St. George’s Indian Residential School in Lytton. In her interview with the Straight, she remembers having her mouth washed out with Lysol for speaking her Nlaka’pamuxtsn language.

At first, she thought that school officials simply wanted her to learn English.

But over time, she realized that they actually believed her language was the “devil’s tongue”.

“I kept on forgetting, so I would speak it, and they thought that was an act of rebellion,” Pierre says. “And so they started to punish me.”

Pierre fought back, and for that, she says, she was brutalized.

“I walked around with Lysol in my mouth all day,” she reveals. “So all the skin came off my tongue and the inside of my mouth. Lysol was very abrasive. My mouth was just bleeding, and then after all that, I had to eat my food.”

That’s not all. Pierre also says that in residential school, she was beaten to the point where she passed out and ended up in a coma. Another time, she was bitten by a snake and did not receive treatment.

She describes the people who ran the school as “psychotic”, declaring that they believed they “could do anything and everything to us”. Moreover, she says that her brother was raped when he arrived at the school, and many years later he committed suicide.

“I could have been one of those buried children,” Pierre states. “I know where they buried them in Lytton.”

She says that’s because when a supervisor took the kids for walks in the woods, they would see little piles of rocks in many places.

“I didn’t know what they were until I tried to jump and play on them,” she says. “Somebody said, ‘No, don’t play on that—that’s a grave.’ ”

Pierre credits her survival to her grandparents, who treated her “like gold” until she was seven years old and had to move to the school. She says that this, along with her Indigenous traditions, gave her the foundation of self-esteem to eventually turn her life around.

She was inspired to develop the Vines Art Festival project by a dream involving her late Uncle Willie, who was a healer, and stories by her deceased friend Woody Morrison. In particular, she was moved by Morrison’s message that when people only concentrate on the physical and material worlds, they lose a part of themselves, so they’re not really complete.

Pierre praises the Vines Art Festival for its strong connection to land and water, which is so central to Indigenous people’s existence.

“It makes us feel horrified that people are just destroying the land and our waters, which we consider sacred, just for the sake of money and power,” Pierre says. “It’s just pure insanity. What makes it even worse is they’ve destroyed a whole nation by taking all the kids away so that they could control us and get our land.”

She says that she has been working on Lake of Dreams since 2018 and deeply appreciates the help she’s received from the festival’s artistic director, Heather Lamoreaux, and all the others who worked on the project.

“Through the Vines Art Festival, it doesn’t matter who you are, how old you are, what colour you are, or what you do—whether you dance or sing or tell stories or whatever,” Pierre says. “So I’m really grateful to that organization for giving us this venue and this opportunity to do this.”

She adds that for her, this is not the end, it’s the beginning.

“There’s more to come,” Pierre declares. “I’m not done yet.”